Player movement in women's cricket positive for the sport

Mary Konstantopoulos
Expert
6th May, 2019
2
Join the conversation
Advertisement
Write for The Roar

On Monday some announcements were made in the women’s cricket space which will result in the biggest shake up I have seen since I started closely following the game.

Let’s begin with the WBBL where it was announced on Monday that Nicola Carey has signed with the Hobart Hurricanes for WBBL05.

Nicola is an exceptionally talented player. She is currently on contract with Cricket Australia, has six ODI caps and one T20I cap. She was a stand out for the Sydney Thunder in WBBL04 and in her WBBL career so far has scored 482 runs at an average of just under 17 and a strike rate of 109.4.

Nicola is a true all-rounder and has also taken 62 wickets at an economy rate of 6.7 and an average of 19.3. I remember several occasions last year where she was the difference for the Thunder between a win and a loss. Many will remember her at the crease in the Thunder’s semi-final, where they fell agonisingly short of victory against the Brisbane Heat.

Her new team, the Hurricanes, have been perennial under-performers to this point in the WBBL. They have never made the finals and despite some improvement last year, they still finished at the bottom of the ladder with just two wins after being on the wrong side of some very tight finishes (including two super over finishes).

It will be disappointing for the Thunder to lose such an experienced player, but I think it is positive for the competition that this sort of player movement is happening, particularly when you consider that Nicola is moving from a team that consistently makes the finals to a team that is yet to feature.

Nicola’s experience will be a welcome addition to the Hurricanes and has become the squad’s first signing for WBBL05. But given the movement in the WNCL rosters, I’m confident there is more player movement to come.

This week, the NSW Breakers also announced their squad for their next WNCL campaign.

There were five new faces in the squad and some very good signs for the future of women’s cricket in NSW. The established cricket pathways are clearly working and beginning to bear fruit with 15-year-old Sydney Sixers player Hayley Silver-Holmes, 16-year-old fast bowler Stella Campbell, 18-year-old wicketkeeper-batter Maddy Darke and 16-year-old Phoebe Litchfield all earning contracts.

It’s extremely positive that all these women have progressed through the Cricket NSW Pathway system and are potentially part of the next wave of women playing cricket who grew up with female players to idolise and professional careers to aspire to.

The final new face is a little bit older and joins the Breakers from the ACT Meteors. Erin Burns played for the Sydney Sixers in WBBL04 and many will remember her hard work, particularly in the field over the summer.

But fresh faces also mean some movement and Breakers fans will be farewelling some of their favourites.

Mikayla Hinkley is relocating to Queensland, Carly Leeson is moving to the ACT and Hannah Trethewy has been delisted.

Ellyse Perry is moving to Victoria to be with her husband Matt Toomua who plays for the Melbourne Rebels and unsurprisingly Nicola Carey will join Tasmania. She will be joined by Maisy Gibson and Belinda Vakarewa. 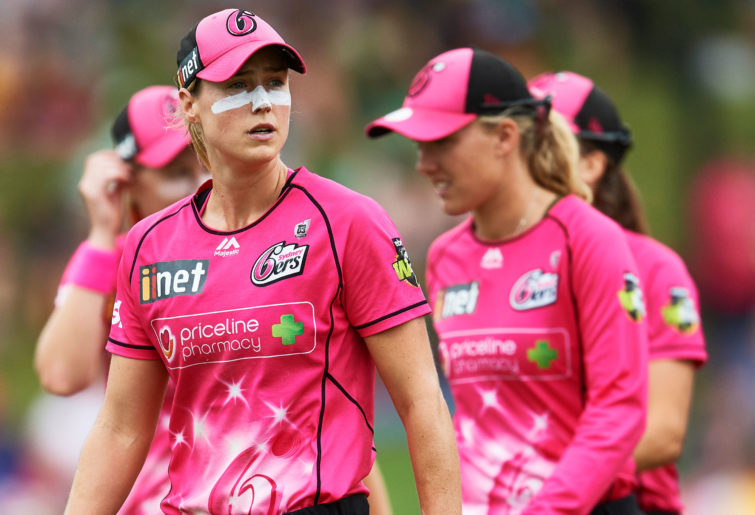 Ellyse Perry of the Sixers (Photo by Brett Hemmings/Getty Images)

When considering the moves, particularly those to Tasmania, I wonder what influence CEO of Cricket Tasmania Nick Cummins had. Nick is an astute administrator with a deep appreciation and respect for women’s cricket.

Prior to taking the mantle at Cricket Tasmania, Nick was CEO at the Sydney Thunder and certainly had the opportunity to watch Nicola Carey, Maisy Gibson and Belinda Vakarewa develop as cricketers.

Whilst this player movement might be unsettling for some, I think this shake up is really positive.

For the last 20 years, New South Wales have been the dominant force in Australian women’s cricket. A big reason for this is the push and emphasis on professionalism, with the NSW Breakers becoming Australia’s first women’s professional domestic sporting team, back in 2016. They also have the silverware to match with the Breakers claiming their 20th WNCL title in 23 seasons in 2018-19.

These movements signal a changing of the guard and may see another state step up and experience some success.

Being from NSW, I always want to see the teams based in NSW successful, but it makes the competition far more interesting when success is shared around.

That’s how I felt earlier this year when the Brisbane Heat won their first WBBL title. The Heat became the first non-NSW team to win the title. This signalled the strength of talent across the competition and perhaps that the NSW dominance we have all become accustomed to has begun to ebb, however slightly.

My only question now is, with the departure of Breakers coach Joanne Broadbent announced last week, who will coach the squad? Could it be Alex Blackwell? Alex is one of the Breakers’ most celebrated players and is Australia’s most capped women’s cricketer.

She retired from domestic cricket at the end of the 2017-18 summer and since then has done plenty of work including coaching in the Lancashire Thunder in the United Kingdom.

The summer of cricket may have ended back in February, but this news signals that the domestic teams are already gearing up for the summer ahead and with the Women’s Ashes less than two months away, there’s plenty of cricket to get excited about.