Take the money and run, Latrell

Latrell Mitchell has been all the talk this week after a sizzling display against the Wests Tigers last Saturday was followed by rumblings he’s not settled.

Apparently the Roosters’ star centre is hearing his $450,000 a year deal – which reportedly rises by another $100,000 next season – isn’t even half what he’s worth, but he’ll need to make the move to No.1 long term if he is to get seven figures – what’s become known to outside backs as ‘fullback money’.

But with the game’s best custodian, James Tedesco, wearing the red, white and blue, Latrell is no chance of heading to the back for the Chooks in the foreseeable future.

So what’s to be done?

Well, if he wants the kind of cash he’s worth, he’ll probably have to go elsewhere.

I’m not going to lay the boot into the Roosters for building a team based on the cheque book rather than genuine development, because it’s a fallacy.

As I outlined late last year, the Bondi club is largely made up of one-club players and blokes who came to the Eastern Suburbs either with no reputation or one that was in tatters due to off-field issues.

Trent Robinson has built this side the same way Craig Bellamy builds his: with a handful of stars and a supporting cast of blokes who give their all.

Then, thanks to the team’s success, these secondary blokes become rep players who get big-money offers and move elsewhere.

It may seem unfair to the club that took a middle-of-the-pack player and made him a star, but it’s the salary cap at play – evening out the competition.

And after winning last year’s grand final in a canter and looking virtually indestructible at this stage of the season, it’s what has to happen at the Roosters.

Talent will be shed. They’re just too dominant to stay together.

Two guys are a lock to stay: Kangaroos captain Boyd Cordner did a five-year deal shortly after their grand final triumph for about $800,000 a season while Tedesco’s contract lasts until the end of 2021, reportedly at about $1 million a year. 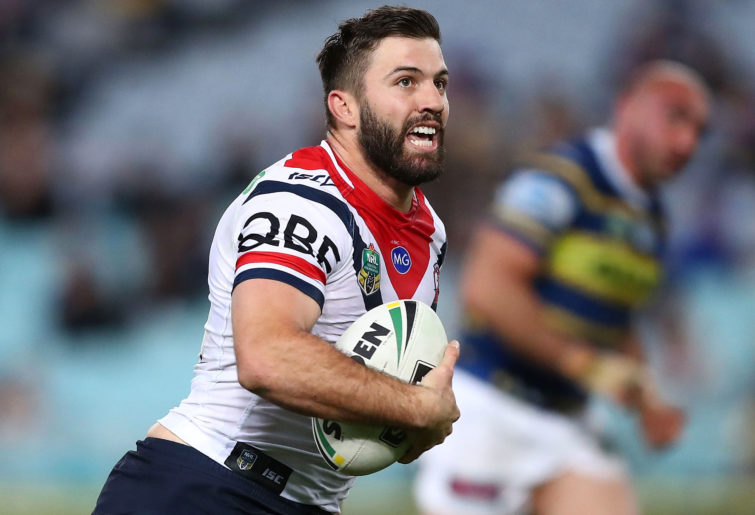 You’d also say that given he’s in year one of a three-year deal worth a reported total of $2.7 million, Angus Crichton will stick around.

Chuck in Cooper Cronk’s seven-figure-a-season deal and that’s the better part of $4 million – nearly half of the $9.1 million salary cap – tied up in just four players.

Now, the 35-year-old halfback has until the end of 2020 left in his legs at the most, so that’s a million bucks freed up, half or so of which goes to Latrell – problem solved.

Except Luke Keary is off-contract at the end of 2020 and – as the form half in the comp – will need an upgrade if the Chooks hope to keep him. And that’s a deal they’ll want to get done by November to ensure he doesn’t end up on the open market.

Likewise, Joey Manu – a young man who’d be in the conversation for best centre in the game were it not for his left-side counterpart – is on a deal that finishes up in 2020, which will require a serious upgrade.

Up front, Sio Siua Taukeiaho is in the elite tier of props and will command big money when next he is available, while Victor Radley is deservedly in line for an NSW call-up, which will ensure his next deal is a whopper.

Look, I could go on and on because the Roosters have a terrifying level of talent across the board.

Which means some of it has to go.

So, back to Latrell.

There’s no question he’s in line for an upgraded contract. It’s not that he’s on a dud deal at the moment – he got an average of $500,000 a season based on obvious but unproven potential, which is more than fair.

But he’s now one of the first picked in any rep side, a premiership winner and a massive drawcard for fans and sponsors.

Based on those three criteria, he’s worth a million a year – and it’s an amount that plenty of clubs are willing and able to pay him.

But it’s money I just can’t see the Roosters ponying up, simply because they don’t have the salary-cap wiggle room.

Paying Latrell what he’s worth would cost them two or three other stars, be they guys already on their roster or those entering the market, such as Tevita Pangai Jr.

As for Phil Gould’s suggestion on this week’s Six tackles with Gus podcast that Mitchell can “make up the difference” in his salary by way of endorsements, well, that’s still losing money.

Agents strike individual sponsorship deals to make more money, not to close a wage gap. Do you think LeBron James’ Nike deal decreased after he moved to LA because the Lakers pay more than the Cavs?

If, hypothetically, Latrell’s on 500 grand and gets an endorsement deal worth another 500, he makes it to a million. But if he’s already on a million, he’ll still do that outside deal and suddenly he’s pulling down $1.5 million.

Likewise, there’s the money he’ll make by playing rep games – you don’t cop a pay cut from Origin just because your club decides you’re worth more this year than last.

So, does the 21-year-old take a serious haircut, probably a few hundred grand a year, to stay under Robinson or – I love this line – look after his family?

Personally – and granted, it’s not a choice I’ll ever have to make – I’d take the money.

When the difference could be as much as a million bucks over three or four years, it’s not an amount many people are in a position to turn down, even Australia’s elite athletes.

As for the whole ‘there’s more to footy than money, like winning grand finals’, well, there’s no guarantee of that at any club.

The Roosters look the goods now, sure, but the whole point of this article is that they’re going to lose some star power in the near future. Too many guys who signed reasonable deals now command the big bucks.

Market forces will bring the club back to the pack.

Ultimately, the only thing a player can be sure of is the number on his contract stating what will end up in his bank account.

And on that count, Latrell Mitchell probably needs to head elsewhere to maximise his value.