Avatar
Roar Guru
14th May, 2019
8
Join the conversation
Advertisement
Write for The Roar

This Friday night, Melbourne face the demons of their preliminary final massacre last September when they fly west to Perth to face reigning premiers, the West Coast Eagles.

In what could only be described as a horror movie, the occasion of playing in the club’s biggest game since the 2000 grand final became too much for the Dees as they crumbled under the pressure applied by the Eagles, going goalless in the first half before eventually crashing to an 11-goal defeat.

They had entered that match with some sense of optimism on the back of four straight wins, including defeating the Eagles by 17 points at Optus Stadium in Round 22.

That result sealed the Dees’ first finals berth for 12 years, the club having hit rock bottom during their time away from September, during which they churned through six different coaches before deciding that Paul Roos and Simon Goodwin were the right men to rebuild the club.

They’d also beaten two of the most consistent clubs this century – Geelong and Hawthorn – in consecutive sudden-death finals to take their place in the final four.

But the mauling they copped against the Eagles would prove a sour ending to what had otherwise been a massive season of improvement for the club, which prior to last year, hadn’t reached a finals series since 2006 and hadn’t reached the penultimate weekend since 2000.

Eight rounds into 2019, it has been suggested that the mental scars caused by that defeat have damaged the Dees, who have won only three of their opening eight matches of the new season.

They’ve also lost spearhead Jesse Hogan, who was traded to Fremantle at the end of last season following a troubled period in Melbourne plagued by injuries, a diagnosis of testicular cancer, poor form and family issues, including the death of his father through cancer. 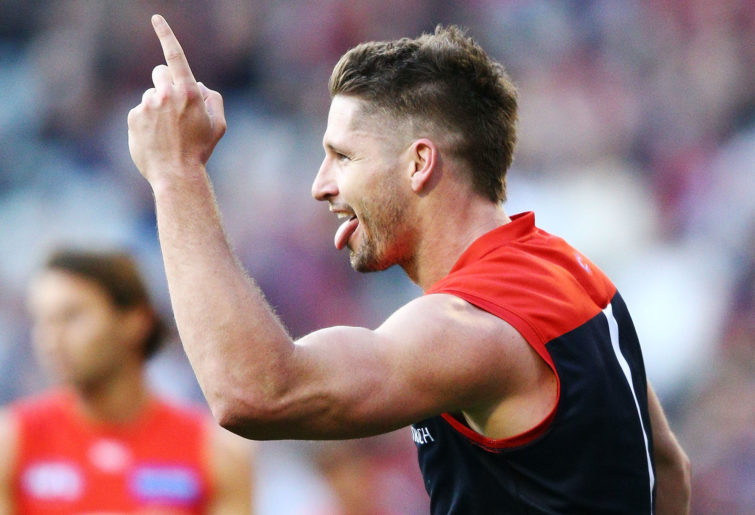 The Dees have, however, won their last two matches in succession, edging out Hawthorn and the Gold Coast Suns by a grand total of six points with Tom McDonald kicking a poster at the death against the Suns last week to give his side another morale-boosting win.

Meanwhile, the Eagles sit seventh on the ladder with a 5-3 record. Last weekend they stayed ahead of St Kilda for the whole match to record an 18-point win at Marvel Stadium.

Their form this season has been modest, having gone down to the Brisbane Lions and Geelong Cats by 44 and 58 points in Rounds 1 and 6 respectively, while also being upset at home by Port Adelaide on Good Friday in Round 5.

Their scoring is well down on previous seasons. They’ve only passed 100 once, against the GWS Giants in Round 2, unveiling their 2018 flag in front of their fans.

Their second biggest win for the season was by only 23 points against a competitive Gold Coast Suns side. The Eagles’ percentage is also in the red at 97.4 – the worst by any side currently in the eight.

However, Adam Simpson’s men should receive a boost to their flagging premiership defence this Friday night, as they start favourites to defeat a Melbourne side that has scored the second fewest points and conceded the third most points of any side in 2019.

But while the Dees won’t be without their chances, they will be without defender Michael Hibberd who copped a collarbone injury in their win over the Suns, while doubt remains over the availability of Jake Melksham and Jordan Lewis.

Their win over the Suns was their second from as many road trips so far this season, having also beaten the Sydney Swans by 22 points at the SCG in Round 4.

What won’t help them is the six-day break, as well as having to hop on a plane for the second consecutive week, which will present Simon Goodwin’s side with another mental and psychological challenge as they attempt to resurrect their season.

While a win on the road will go some way towards restoring some confidence for the Dees, a huge win for the Eagles would help get their title defence back on track and show why they were among the most-feared teams last year.

Coming off a second consecutive wooden spoon, not many teams entered the 2010s decade under more pressure than Melbourne.