Yattuzzi
Roar Rookie
22nd May, 2019
36
Join the conversation
Advertisement
Write for The Roar

When I was young, I had a generous godmother whose family were diehard Richmond supporters.

I went to many Richmond games and to all their 1970s finals. I saw all their great victories. Richmond were strong, hard, proud and expected to win.

Richmond were a powerhouse. A fighting fury and they knew it.

Then, like in end of The Great Gatsby, the party was over.

In the 1980s, ’90s and 2000s, the cupboard was bare. Richmond copped some absolute floggings. They had 36 years in the wilderness.

In 2015, the headlines said Richmond have not won a final for 14 years. They must win.

But they were beaten by North Melbourne. This meant that it was a fourth straight final loss. The demoralised club did not even make the finals the next year. The Richmond head coach’s office had a revolving door. Their current coach Damien Hardwick was perennially down for replacement. 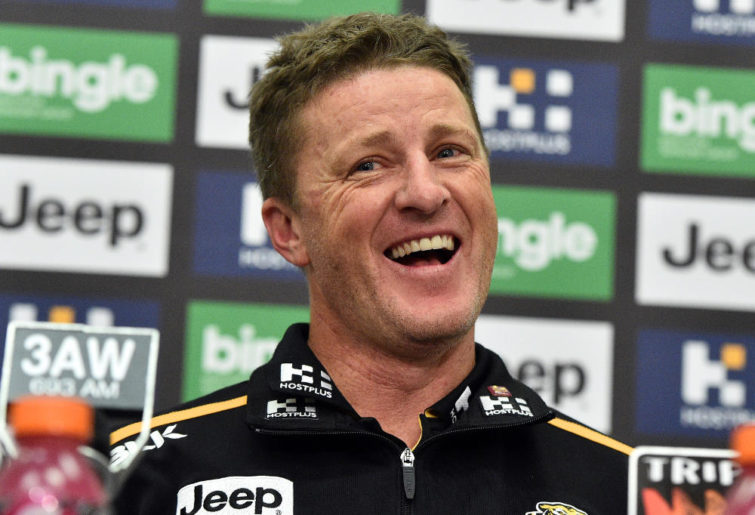 During this miserable time, surely the fans would have disappeared. Some disillusioned, some died of old age, some died of heartbreak.

It is hard for fathers to push their team’s colours on their kids when the team never makes the finals, and if they do, always lose them. The fans were humble, very quiet and had low expectations.

Then in 2017 it happened, the miracle of the Crouching Tiger.

They were convincingly beaten by the powerhouse Carlton in the first round. Then to the surprise of all – especially the long suffering Richmond supporters – they started to win.

Sitting at 50-50 halfway through the season, they won nine of the last ten. Then they finally won a final, thrashing Geelong. They beat the GWS at the MCG – not that hard – and finally belted Adelaide to take the premiership.

They were back. They had new heroes. There was Bachar Houli, Alex Rance, Trent Cotchin, Dustin Martin and even their coach Hardwick. The demand for tickets at the finals was enormous.

In 2018, crowds were huge. The membership exceeds 100,000. This is one tenth of the memberships of all the clubs combined.

So how did they do it? How did they keep and even grow their fan numbers?

The Western Bulldogs were never able to match Richmond fan numbers and they had a similar spell in the wilderness.

And are the Tigers back.

The 2018 campaign ended just one unlucky loss away from a flag.

In 2019, they have injuries, they are sitting on fifth, but the fans know the fighting fury will come hard in the finals and take another flag.