Should Michael Voss get another head coaching job?

When it was announced that Brad Scott and North Melbourne had parted ways it did not take long for Michael Voss to be linked to the top job.

Currently the 43 year-old is listed as the fourth favourite for the Kangaroos job on Sportsbet, with interim coach Rhyce Shaw the early bookies favourite.

The landscape can change quickly in the AFL and with Brendon Bolton losing his job at Carlton this week it is not just the one senior position that will be available.

The general consensus among many footy pundits seems to be that Michael Voss is ready for a return as head coach and his time as an assistant will serve him well if he gets another opportunity.

Previous history tells us AFL clubs looking for a senior coach tend to gravitate towards assistants that have been involved in a recent successful football program.

Look no further than Hawthorn that has had a gluttony of assistants under Alastair Clarkson including Brendon Bolton, Damien Hardwick, Luke Beveridge and Adam Simpson go on to senior coaching roles at other AFL teams.

While Voss has enjoyed the ultimate success as a player the same cannot be said for his time at AFL level in the coaches box. 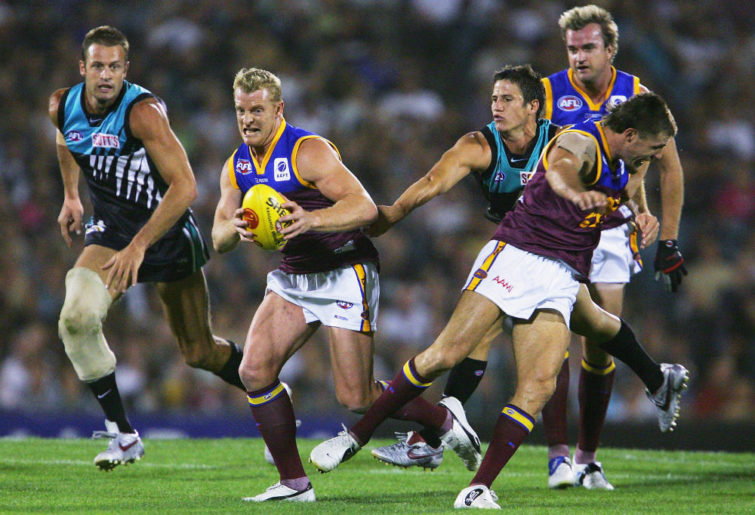 Michael Voss of the Lions in his playing days. (Photo by Ryan Pierse/Getty Images)

In fairness the triple premiership captain did lead Brisbane to the finals in his first year as coach in 2009. This included a win over Carlton. The Lions have not played finals since.

But an overall winning percentage of 39.4 per cent saw the Lions legend depart in 2013 after not having his contract renewed.

Life at Alberton
The former Lions coach has been at Port Adelaide since the 2015 season when he was appointed into the role of midfield manager.

This season the 43 year-old was upgraded to senior assistant under Ken Hinkley after the exit of Matthew Nicks and Hinkley has certainly been singing the praises of his right hand man.

“Michael Voss has had great coaching preparation. I’d like to see past coaches get another chance at senior level”

While it is a nice sentiment the reality is Port has not won a finals game since 2014 and have missed finals three out of the last four years with Voss and Hinkley at the helm.

The Power fan-base is certainly divided on whether the current Hinkley/Voss combo is one that is capable of taking the club to a premiership.

It is always difficult to analyse what role and input an assistant has in overall game plan, structure,training, player development etc. Voss may have some different football philosophies he would preach if he was in charge.

Not only do Port Adelaide need a good result this year to silence some of the critics the on-field results are just as vital for the 1996 Brownlow medalist to enhance his own coaching reputation.

The AFL hall of famer has an incredible legacy in the game and there is no doubt his record as a player demands respect.

In a results-driven business however it can’t be swept under the carpet the Port Adelaide senior assistant has not been involved in any finals success in a coaching role approaching a decade.

This lack of recent success might just be the main stumbling block that stops North Melbourne and Carlton pulling the trigger and giving Michael Voss his second crack in the hot seat.