Which way is the World Cup headed?

Now that we are at the business end of the tournament, each team (barring New Zealand) is at about equal footing.

Virat Kohli’s observations of chases above 250 to be a challenge and that of 300 being a pretty good score have aged pretty well. ​Winning the toss and batting is a huge advantage now for five reasons.

1. The pressure of chasing in knockouts among equal teams.
2. Dry pitches in hot summers, which make scoring difficult even further in the second innings.
3. The bowling-second teams get to see what worked and what didn’t and bowl better than the team in the first dig. It is also apparent when to attack and when to contain – the mistake Indian spinners made during their loss.
4. The peculiar shapes and sizes of grounds put the team bowling second at an advantage.
5. No chance of rain, thus taking out shortened-chase and Duckworth-Lewis advantages for the chasing side.

Their bowling, bar two bowlers, has been pedestrian. I feel bad for Pakistan and Bangladesh to have suffered their fate because of washouts. The way the Black Caps have played, they have no business of making the semis.

What about England?
It does seem that if they don’t win the toss, they would struggle against India and Australia. But winning the toss has been their specialty – be it in Tests versus India, Sri Lanka, South Africa or now in their last knockouts. The law of averages doesn’t apply to such small sample sizes, so if they win the toss with their very good bowling attack, they will remain hard to beat.

The other factor at play is the short boundaries employed to negate their weakness – playing out spin when hitting out is not an option. Against India, the short boundaries hampered the Indian spinners and this is again going to be the case with the semi-final played on the same ground. If the pitch employed is a fresh one and at the center to the ground, this wouldn’t work in the semis.

While the openers carried on a breathtaking assault, I think India would be better prepared for them in the semis and among the top three teams, Indian players have the most pedigree of performing in crunch situations. The English were fortunate not to have lost any wickets in the first ten overs despite a myriad of false strokes.

What works of England though is their very good bowling attack, calm captaincy, faith in their abilities – all of which were on show notwithstanding the advantage of tosses.

With some luck, they are the only team with the openers which can take the winning advantage of the new ball in the first 20 overs.

While, on paper, the English batting line up looks best – if a stroke or two of flashiness from the openers ends up dismissing them, the Joe Root coming in first five overs is quite different from that coming in at 15-20 overs. For a fab four player, he tends to take more than needed chances against pace and doesn’t really play like the “glue” he is called out to be!

Teams can now formulate clear plans versus Eoin Morgan and Jos Butler. While accurate bouncers (slow or pacey) away from the stumps is a ploy for Morgan, Butler could be foxed with the change of pace – especially when he tries to get off the block early. 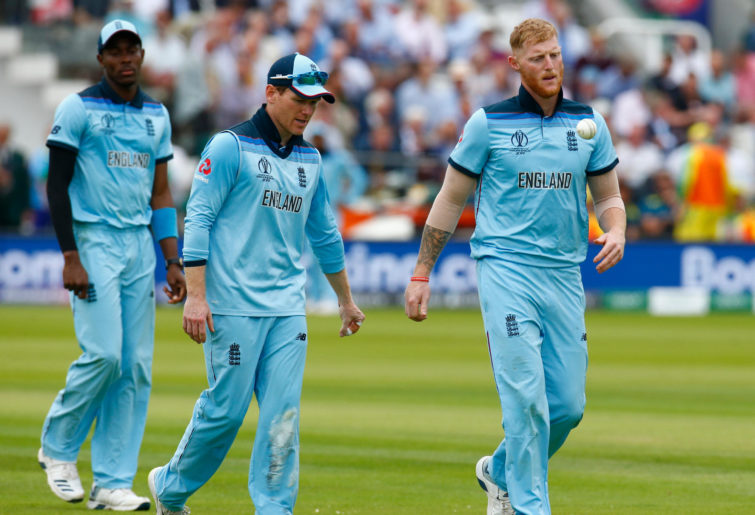 What about India?
Their muddle in the middle order is well documented. But batting first, their safety-first approach pays more dividends in getting them to par, or slightly above par scores. In knockouts, I think this would be a big factor and I don’t see India recovering from the loss of Rohit Sharma and Kohli.

They still have a game left (which has no consequence whatsoever) in which they will try Ravindra Jadeja as the sixth bowling option, Mayank Aggarwal as the opener and KL Rahul as the middle order bat. If the boundaries indeed remain postage stamp size, the inclusion of Jadeja and three pacers at the cost of Kuldeep Yadav and sixth bat could be a pretty good strategy.

I believe if Rohit and Kohli are out, then the match is beyond India anyhow, so the cushion of Dinesh Karthik or any proper bat at no.6 is not really warranted.

I also have question marks on the performance of the top three – while Rohit has scored runs, he has always done so having been dropped. Rohit and Kohli’s performance at the world stage knockouts is nothing to write home about, albeit from a small sample size. The injury to Shikhar Dhawan is huge, given he has the best record among all players in world-level tournaments.

His replacement, Rahul, doesn’t seem to have the game to either take on the chase head-on or setting the tone while batting first.

What works is their bowling attack under these conditions and on fairgrounds is the best among the three.

What about Australia?
Certain finalists. The team that has beaten England recently and against whom England will face the most pressure, given the importance and their poor track record. They are more or less on even keel with India too.

What works for them is their batting which, in the mold of the Indians, is solid, safe and has big game experience. With Steve Smith at four, Glenn Maxwell and Alex Carey, I would rate their batting higher than the other two. Yet, they have had the batting meltdowns (and pretty good recoveries) versus New Zealand and the West Indies.

Mitchell Starc has been lethal and he would be so against England too. The Indian batsmen have much better control of their egos and know how to play him out. The pace attack has been very competent, too bad Adam Zampa of the last six months hasn’t found his groove this World Cup.

They have beaten England and New Zealand at Lord’s, the ground for the finals. Given the peculiarities of the ground, a decent advantage.

If Australia take the measured attack approach in the first 20 overs, which Aaron Finch and David Warner are capable of, they would be certain front runners. Even now, what I like about Finch is how he respects the bowling in first ten and is not afraid to pedal the metal in 10-20 overs (where, barring England, other teams are still building up). Warner could take a similar approach.

So is it win the toss and win the tournament?
This doesn’t apply to New Zealand for the aforementioned reason. Needless to say, it depends on the total the bat first team puts up. England, in their quest, for 300 could very well bundle out for 230 like the Champions Trophy in 2017.

On the whole, given how and where the matches are scheduled, I think Australia has the best chance to lift the cup. England definitely has the wood over India and, with the loss of Dhawan, it puts too much pressure on Kohli and Rohit, who haven’t really performed at the most important junctures against the best teams yet.

All of this will come to naught of course if Australia somehow lose against South Africa! How far has Australia come in the last six months?

Please do share in comments other tidbits that could have an impact in these three games.