Scott Lycett and the Power of the unexpected

Scott Lycett’s goal flicked the switch on Port Adelaide’s third quarter demolition job against the Crows at Adelaide Oval on Saturday, going on to win 15.11 (101) to 5.14 (44).

Football is a game of tactics, with a wealth of statistics, which I by no means discount, but sometimes it passes beyond, into the realm of the intangible and incomprehensible and that is, I propose, why we truly love it.

The Crows battered Port Adelaide in the first half, who had nonetheless resisted strongly and responded to regain a slender lead at half-time.

Then, within all of ten seconds of the third quarter commencing, the Crows have won the clearance and kicked forward to Taylor Walker, who has muscled his way through one player and snapped an astonishing goal.

For anyone who has watched the last nine showdowns, this meant bad news for Port.

Taylor Walker of the Crows (Photo by Daniel Kalisz/Getty Images)

Another centre bounce, another forward entry for the Crows. Taylor Walker has marked it and is lining up inside fifty for the second time in under thirty seconds.

The Crows home crowd is raucous.

It appeared as if a second half demolition was in the offing, but to be inflicted upon, not by, Port. Flashbacks of Showdown’s past were flooding back to fans everywhere.

And, then, Walker misses a relatively straightforward shot, the long-range type he loves.

From the kick out Port go long and breakout with some devastating run and gun play, opening the corridor for Darcy Bryne-Jones who puts it out in front of Lycett, leading across the forward line near the paint of fifty.

The kick bounces agonisingly short, normally a worrying moment for a big man, but big Scotty isn’t your average lumbering log, as he is about to show.

The ball bounces cleanly and Lycett does what no one is expecting: he takes the game on.

A quick step inside and he turns his fellow two metre counterpart, Reilly O’Brien, arching the back as a clutching, grasping O’Brien can’t quite find jumper or man.

Other surrounding Crows players try to leave their men, having expected Lycett to handball off at the first opportunity but Scotty has eyes only for goals and he sends a picture-perfect drop punt through from forty-five.

There was something captivating and exhilarating about that moment and as Lycett gave a big flex in celebration and expended some of the overflowing adrenalin on a nearby Matt Crouch.

There is something almost comedic about the two giants taking each other on at the edge of fifty, but it was overpowered by the awe-inspiring sight of two behemoths going hammer and tongs.

Sun Tzu wrote that all warfare is based on deception, and sometimes you are the deception, or in Lycett’s case, being roughly two metres tall and weighing 100 kilograms. Add to those inbuilt limitations, Port’s sole ruckman had injured his knee in the first half and appeared severely restricted.

The tape on his knee and his inability to jump at centre bounces appeared further limitations, yet became, in the moment, simply another deception.

No one expected him capable of doing that, which only made it all the more exhilarating.

If moments are judged on how they change the game, Lycett’s goal has to be one of the most influential of the season. The game transformed from an arm wrestle, in which the Crows were the better side, to one-way traffic as Port Adelaide’s running game went into overdrive.

In that moment he blew off not only his physical restraints, but the mental chains, and his team followed suit. 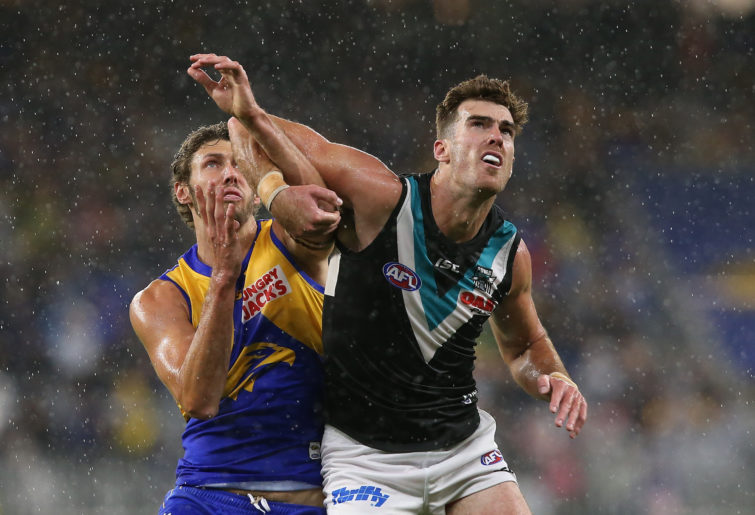 The players continued to take the game on relentlessly, breaking open the centre corridor time again and finishing some wonderful goals in the process. This was an inspired Port team.

Rozee snapped calmly from an incredibly tight angle, Westhoff scored from a centre corridor break, thrilling, while Sam Gray faked the kick on his right to run around the man on the mark and slot one with his left from forty-five on the angle.

In roughly eight minutes of football Port piled on seven goals. After scoring the first goal of the second half, the Crows would not goal again.

Ruckmen can often be an after thought in modern day AFL, but Saturday’s showdown shows how those hulking centre circle silverbacks, can broaden their shoulders to take along a whole team.

However, in a game of numbers and tactics, it offered a reminder that sometimes you need someone to ruthlessly seize the moment and break out of the mould, so that everyone else can come along for the ride. 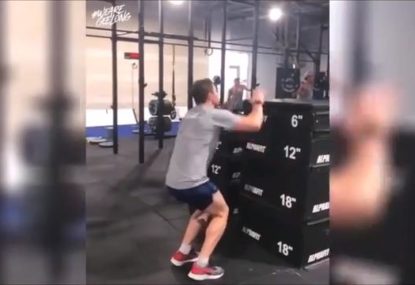 The 2019 trade period was dominated more by deals that failed to get done than those that did, as the narratives of Joe Daniher and Tom Papley captured popular attention only to fall through in the final hours.