Despite their stunning win over India in the semi-final to proceed to their second straight World Cup big dance on Sunday, New Zealand will go into the final against England as considerable underdogs.

They need to do something radical if they are to do what every non-England cricket-loving nation on the planet wants them to do and lift the trophy at Lord’s – and picking leg spinner Ish Sodhi for the big match might be just that thing.

To do so would take considerable guts – after all, Sodhi’s played just once at this World Cup where he bowled six unassuming overs for 35 runs against Australia, being out-bowled by the part-time off spinners of captain Kane Williamson in the process.

He also holds a bowling average of over 36 in his 31 career ODIs to date, with an economy rate of 5.54 that’s only just about acceptable.

Take into account that the Kiwis just restricted India’s lethal batting line-up to 221 with the bowling attack that has been together for the majority of the tournament, and it would take some major kahunas to split them up.

So on that note, here’s why they should totally do that.

England’s three rampant victories over India, New Zealand themselves and Australia to steamroll to the home of cricket for the final has been built on a dominant bedrock – the opening partnership between Jason Roy and Jonny Bairstow.

They put on 160 at a run rate over seven against India, smashed the Kiwis for 123 at nearly that run rate, and most recently brutalised the Aussies with a 124-run stand going at more than a run a ball that halved a modest run chase in no time at all. And for good measure, they put on 128 – again with a great run rate – against Bangladesh in their last partnership together before injury ruled Roy out for a mid-tournament stretch.

Roy, in particular, is lethal – he averages 71 for the tournament, clobbers his runs at a strike rate of 117 – a feat only Glenn Maxwell and Jos Buttler have beaten out of the top 50 scorers – and sets a platform for England’s middle order to dominate. In the last three games, the match was effectively over by the time he got out. The last 15 times he’s passed 50 in ODI cricket, England have won. 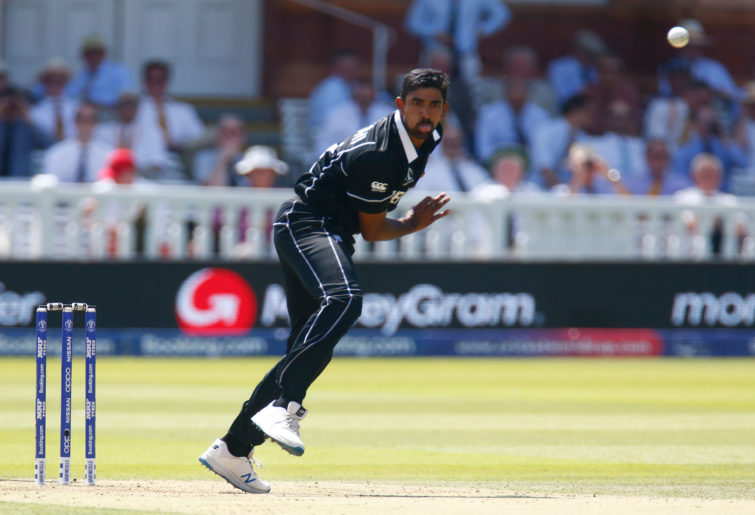 Sound imposing? It is. But he does have a weakness, and that is leg spin with the new ball. And that’s where Sodhi comes in.

The Bairstow-Roy opening stand has failed just twice at this World Cup. In their first game South African leg spinner Imran Tahir nicked off Bairstow on the second ball of the innings, and in their loss to Pakistan Roy fell to Shadab Khan – another leg spinner – for just 8, his one failure of the Cup.

Coming into the tournament, Roy averaged just 13.60 against leg-spin across his career – including T20s – according to The CricViz Analyst. It’s a significant Achilles heel across plenty of cricket.

Take into account as well that at this World Cup if Roy misses out, so do England. His two missed games were against Sri Lanka and Australia – both matches England lost. His other failure against Pakistan meant England – despite middle-order centuries from Joe Root and Jos Buttler – didn’t have the platform from which to attack a big run chase of 348, which left them vulnerable to losing wickets that ultimately cost them that game.

Additionally, Bairstow suffers when Roy fails. He’s made just 104 runs at 26 in the four innings when Roy either hasn’t been with him or has fallen cheaply, compared to 392 at 65.33 with his buddy riding shotgun.

Sodhi has opened the bowling just once in international limited-overs cricket – against Australia in a Trans-Tasman T20I series final back in February 2018, when he bowled David Warner and took one for 21 in four overs.

It’s worth noting on top of that that the Black Caps seriously flirted with the idea of bringing him in for their group-stage match against England, and ultimately came to regret it as Roy and Bairstow’s opening-overs onslaught gave the Poms a match-winning edge.

Should the Black Caps take this monumental risk, it would likely mean dropping Mitchell Santner unless they risk destabilising their already shaky batting line-up by punting one of their openers in Martin Guptill or Henry Nicholls.

This would mean putting keeper and Test opener Tom Latham in there while playing seven front line bowlers, which is hugely dangerous.

Santner has been important for New Zealand this tournament. He’s kept things tight in the middle overs and performed his role in playing every match so far. But he’s managed just six wickets in his nine games to date, and against that England batting line-up – especially considering New Zealand’s weakness in that area – you’re not going to win too many matches just by keeping things tight.

In any case, look at the way Roy took down Nathan Lyon in the semi-final to see what he thinks of finger spinners.

It’s bonkers, it’s risky and it just might be what New Zealand needs to win the World Cup.

New Zealand's obsession with Santner for Tests needs to stop

Friday, 27 November 2015, was a historic day in international cricket as fans around the world witnessed the first day-night Test, with Australia and New Zealand locking horns at the Adelaide Oval. 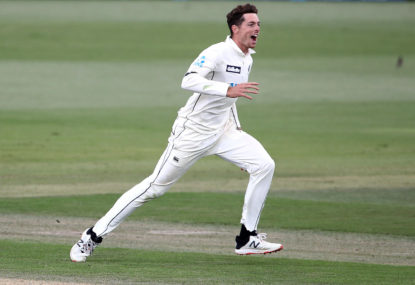 New Zealand's obsession with Santner for Tests needs to stop

Days after playing a marathon knock of 251 against the West Indies, Kane Williamson showed off his sheer range of shots against Pakistan at the Seddon Park in a T20 game. 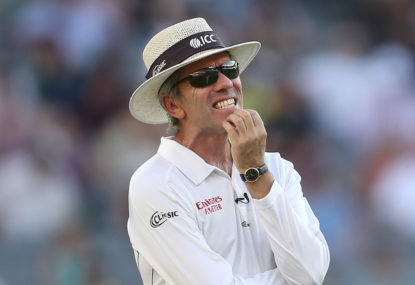 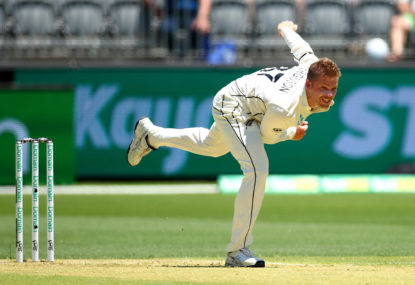