The Great One
Roar Pro
12th July, 2019
53
Join the conversation
1020 Reads
Advertisement
Write for The Roar

Much has been made of the perpetual pariah Mitchell Pearce and his recent Origin success after more than a decade of failure, and it is easy to see why.

The story writes itself as a redemptive arc that rivals those of the great ancient Greek parables and rugby league fans are fiends for easy narratives.

However, the celebrations are now complete and the players have rightfully received their accolades for sealing an excellent comeback win against Queensland, so let’s dig into what this really means for Pearce.

Redemption as a passenger only
James Tedesco and Damien Cook had incredible games that only add to their stature among the elite of the game. In addition to that, Jake Trjbojevic, Paul Vaughan, David Klemmer, Tyson Frizell and Boyd Cordner helped give New South Wales the edge it needed to reign supreme.

One name that should not be getting any plaudits for the vast majority of the games work is Mitchell Pearce.

In attack, he was largely impotent, throwing a frantic intercept at one stage and then running into the back of Tedesco as he made yet another break, squandering a potential game-winning moment.

As a game manager, he was average, failing to find much field position through his kicks and not taking control of the team as they became too lateral in the first half.

A lot has been made of his ‘game-winning pass’ but let’s be clear; the pass, while good, was not the defining moment of that try.

Tom Trjbojevic did exceptionally well to draw and pass to allow Blake Ferguson the space in which he brilliantly remained in and got the ball to Tedesco, whose clever footwork allowed him to score.

The pass was certainly very good and important in the overall try but it minimises the much harder work done by others to say Pearce should get credit for that try.

That being his defining moment in the game says a lot about how average he really was and when he had opportunities to win it earlier he couldn’t do it.

Was he noticeably bad? No, he wasn’t, but he wasn’t the game-breaker some have pegged him as. 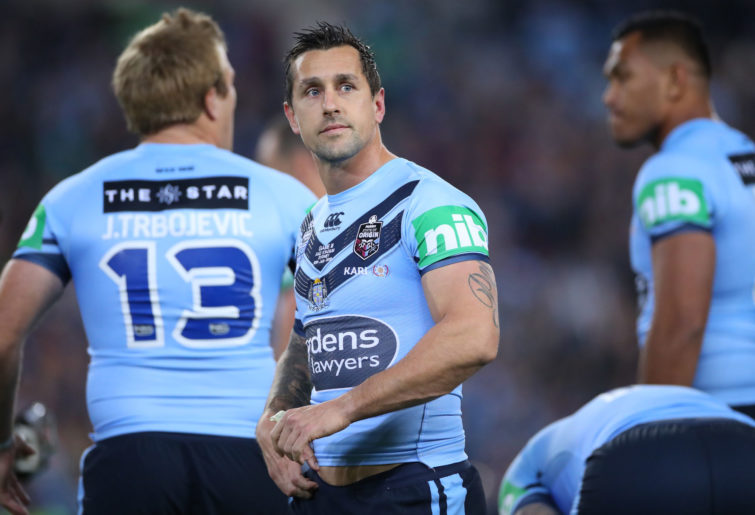 Redemption against whom?
When you think of redemption, you think of someone performing against the same opponent they failed against previously and besting them. It is the core feature of all redemption arcs and one that Pearce’s sorely lacks.

He will never have a series win over the people who created his persona as a failed origin player; Johnathan Thurston, Billy Slater, Cameron Smith, Darren Lockyer or Greg Inglis.

Those history books are closed and their reputations assured, with Pearce nothing more than a footnote among their great heroics.

Pearce winning against a largely new and untested Queensland side, without any of those greats, begs the question: just where is his supposed redemption? His white whale left long ago and all Pearce can do now is beat lesser imitations.

Unwanted redemption
Let’s not forget that the halfback role was vacant in Game 2, where a loss meant another series finished for the Blues.

Mitchell Pearce was available for selection until a ‘hip injury’ ruled him out, although curiously enough he managed to be fit for his next club game.

If Pearce really did pick up a minor injury it would also make sense he would have been rested during the game it occurred in, especially considering the Knights were thrashed 34-4 by the Storm and the game was all but done by the 60th minute.

Interesting then that Pearce still managed to play the full 80 there but was too injured to play for just one week, the week the Blues faced their biggest battle in quite a few years.

Other Blues greats would have no doubt stepped up to the plate, battling injury or not, and luckily James Maloney did just that.

It is undeniable Pearce has gone through more criticism, some far too personal, than anyone should ever go through.

I am happy he got his win if only for his mental health and you would be lying if you said you didn’t enjoy seeing his unadulterated joy when lifting the shield in front of the fans who have tormented him for so long.

But Pearce’s story is not of redemption but rather of tragedy. A great clubman who could never step it up to the next level and establish himself among the games premier players in a representative jersey.