AFL team of the week: Round 17

The ladder is starting to take shape with the completion of Round 17. Lets take a look at the best performed players from the weekend.

Back pocket – Nic Newman (Carlton)
Facing his old side, Newman was fantastic in an upset win for the Blues. The former Swan had 32 possessions at 87% efficiency, hauled in 13 marks, six of them intercepts, had nine rebound 50s, four spoils and three tackles. On the small SCG ground, his 712 metres gained were invaluable.

Full back – Jordan Roughead (Collingwood)
For the first time since the end of the 2013 season, Josh Kennedy was held goalless in consecutive matches. Roughead played a big part in that, continuing his terrific debut season with the Magpies.

Back pocket – Taylor Duryea (Western Bulldogs)
Another player who switched clubs in the off-season, Duryea was simply magnificent in the Bulldogs’ gritty win over Melbourne at Marvel Stadium. Collected a career-high 31 disposals, took 13 marks, three of them intercepts, had six score involvements and six defensive 50 rebounds while gaining 614 metres.

Half back – Conor McKenna (Essendon)
One of the best sights in the AFL at the moment is watching Essendon’s speedy half backs blitz across the field under the roof at Marvel Stadium. One of those is McKenna, who gained 589 metres from his 25 touches on Saturday against the Kangaroos, while he kicked a ripping goal.

Centre half back – Robbie Tarrant (North Melbourne)
Continued his charge towards a maiden All Australian selection with a superb display in a losing side against Essendon on Saturday. Tarrant had a team-high 22 possessions, gaining 465 metres with them and using it at an incredible 95% efficiency. Picked off plenty of opposition attacks with his 11 grabs, while he got his fist to the ball ten times. Also laid four tackles in an admirable effort from the North vice-captain.

Half back – Jack Crisp (Collingwood)
The hard-running Magpie was pivotal to his side’s thrilling one-point win over the reigning premiers on Friday night. Crisp collected 30 touches, using it at 80% efficiency. Also spent plenty of time in the midfield, winning six clearances and laying nine tackles. Was particularly important in the final quarter as Collingwood charged into the lead, gaining 157 metres with his 12 disposals. 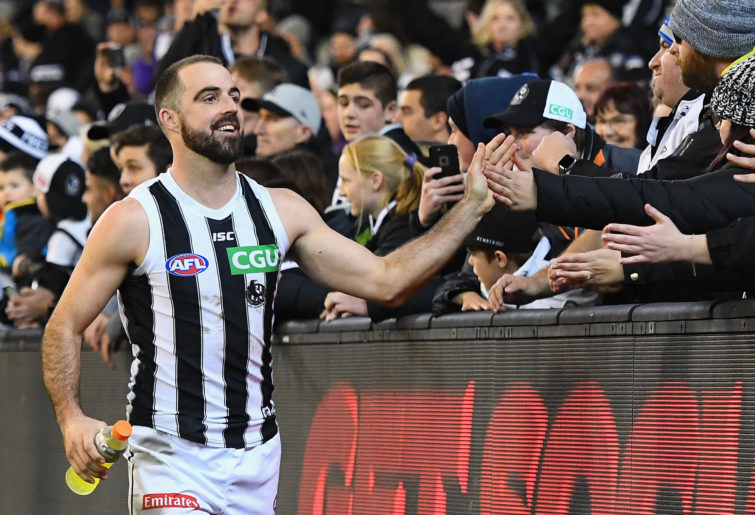 Centre – Josh Dunkley (Western Bulldogs)
Put in one of the best individual performances of the season against the Demons on Sunday afternoon. Dunkley continued his outstanding season with a monster 39 disposals, 24 of them contested, nine clearances, six marks and a whopping 15 tackles. Oh, and he kicked two goals. In an eight-point win, it truly was a match-winning performance.

Wing – Ricky Henderson (Hawthorn)
Another player enjoying a brilliant year is the former Crow Henderson, who must surely be on track to win his first best and fairest award at the age of 30. In a fairly drab game against the Dockers in Tasmania, Henderson gained 671 metres with his 25 touches, while he took 11 grabs, laid five tackles and had six score involvements.

Half forward – Dayne Zorko (Brisbane)
After a fairly quiet start to the year on a goalkicking front, Zorko has returned to form in front of the big sticks in recent weeks and it continued in Brisbane’s big win over Port Adelaide on Sunday. In wet conditions, the Lions skipper had 24 possessions, 21 of them by foot, while he laid five tackles and booted three goals.

Centre half forward – Brody Mihocek (Collingwood)
The Magpies link-man put a quiet six-week block behind him with a blistering performance against West Coast on Friday night. The 26-year-old collected 19 possessions, took ten marks, five of them contested, laid three tackles and, for the fifth time in his career, booted four goals.

Half forward – Charlie Cameron (Brisbane)
Moved into the top six in the Coleman Medal race with a four-goal haul against Port Adelaide in the wet. Finished with 15 touches and three marks. Arguably Brisbane’s most important player as they gear up for their first finals campaign since 2009.

Forward pocket – Anthony McDonald-Tipungwuti (Essendon)
Broke North Melbourne hearts, including yours truly, on Saturday night with an incredible match-winning goal with 20 seconds on the clock at Marvel Stadium. It was McDonald-Tipungwuti’s fourth major and his 11th score involvement, with the gun Bomber also having 19 touches, 12 of them contested, three marks and four tackles.

Full forward – Ben Brown (North Melbourne)
It was a colossal effort by the Kangaroos’ star forward, who almost single-handedly dragged his side over the line on Saturday against Essendon. Brown had career-high numbers with 18 touches and 12 marks, including six contested and nine inside 50. To top it off, he converted six majors, just one shy of his best effort in a game. Now into second position in the Coleman Medal leaderboard, five off Jeremy Cameron.

Forward pocket – Eddie Betts (Adelaide)
For the second time this season, Betts brought his A-game against the Gold Coast Suns, booting six majors in a 95-point rout at Metricon Stadium. Also had 20 touches and six marks, which are both season-highs, while he was involved in a total of 12 Adelaide scores.

Ruckman – Matthew Kreuzer (Carlton)
The lionhearted Blues ruckman was terrific against Sydney on Saturday, collecting 19 touches, ten of those contested and winning six clearances. Was a class above in the ruck, winning 45 hitouts, 13 of those to advantage.

Ruck rover – Patrick Dangerfield (Geelong)
Was his side’s best on Saturday night against a gutsy St Kilda side, winning 32 possessions, 23 of them contested, as well as nine clearances. Also took four grabs, laid seven tackles, won 554 metres for his side and his one goal was part of eight score involvements.

Rover – Jarryd Lyons (Brisbane)
If Lachie Neale doesn’t get you, Jarryd Lyons will. Port Adelaide found that out on Sunday night, with their fierce targeting of Neale allowing Lyons to get off the chain and win 36 disposals, 17 of them contested, and nine clearances. Also laid nine tackles and kicked a goal in arguably his best game in Brisbane colours. Amazing to think that this guy, who was turfed by the Gold Coast Suns at the end of last year, is a leading midfielder in a side sitting third on the ladder.

Interchange – James Worpel (Hawthorn)
The ‘Worpedo’ silenced any remaining doubters who believed he was suffering from the dreaded second-year blues with a terrific game against Fremantle in Launceston. Worpel gathered 33 possessions, 15 of them contested, won nine clearances, gained 580 metres, took five marks and laid four tackles.

Interchange – Nat Fyfe (Fremantle)
Threatened to turn the game on its head on Saturday against the Hawks, with the Dockers’ captain helping his side to five consecutive goals after conceding the first five of the game. Three of those majors came off the boot of Fyfe in the second quarter, who was thrown forward as he struggled with an elbow injury. Also popped up in defence to prove that the man can truly do anything.

Interchange – Toby Greene (Greater Western Sydney)
The Giants lost Stephen Coniglio early in the match, and with Josh Kelly already out of the side, it saw Greene move into the midfield and play his best game of the year, albeit in a losing side. Greene had 34 possessions, 13 of them contested, won seven clearances, took six marks, laid six tackles, four of those inside 50, and booted two goals. Also gained 586 metres, which could see him earn the three Brownlow Medal votes despite the Giants going down by 27 points.

Interchange – Kane Lambert (Richmond)
The past two weeks have seen Lambert provide a dangerous target in the attacking half for the Tigers, with the 27-year-old kicking three goals for the second consecutive week. Had 19 touches, six marks, including three inside 50, and three tackles.

Emergency – Levi Casboult (Carlton)
In one of the feel-good stories of the year, Casboult continues to perform well for the Blues, and his game on Saturday against the Swans was close to the best of his career. The 29-year-old had 14 possessions, took seven marks, three of those contested and three inside 50, laid five tackles, won ten hitouts relieving Matthew Kreuzer in the ruck, and he kicked two goals. That makes it six goals from the past three games for Casboult, with David Teague clearly preferring him up forward as opposed to in defence as we saw him earlier in the year.

Emergency – Adam Treloar (Collingwood)
The AFL’s No.1 ranked player when it comes to disposals was at it again on Friday night against West Coast, amassing 39 possessions, 16 of them contested, and winning seven clearances. Provided a lot of grunt with his six tackles, and was particularly important in the final quarter.

Emergency – Jarrod Cameron (West Coast)
Fresh from a four-goal haul against the Dockers in his third game, Cameron equalled that with another four majors, with all of them coming in the first half. Finished with 13 disposals, five grabs and seven tackles, but will be disappointed that he got shut down in the second half. Because of that, older brother Charlie takes his spot in the final 22.

Emergency – Hunter Clark (St Kilda)
Since coming back into the side in Round 13, Clark has been a shining light for the struggling Saints, averaging 20.8 touches in that time. His game on Saturday night against Geelong was a career-best, finishing with 25 touches at 88% efficiency, seven marks, four of them intercepts, nine tackles and 411 metres gained.