In this fifth and concluding part of our series on the matches that shaped the 1999 World Cup, we look back at the highly significant last game of the Super Six stage, the two semi-finals – one of which was arguably the best ODI of all time – and the final at Lord’s.

Waugh leads from the front – Australia v South Africa, Super Six, Headingley
With a semifinal berth at a stake, Australia faced a must-win situation in this last Super Six match, as a defeat for them would have sent Zimbabwe into the final four at their expense.

South Africa elected to bat a bouncy pitch, and were boosted by an innings of 101 from opener Herschelle Gibbs. Gibbs added 95 for the second wicket with Daryll Cullinan (50), followed by 78 for the fourth wicket with Jonty Rhodes.

Rhodes and Lance Klusener accelerated thereafter to take the total to 271/7, with 47 runs coming off the last five overs. Steve Elworthy castled Adam Gilchrist in the second over, before Mark Waugh was run out to reduce Australia’s score to 20/2.

When Elworthy also removed Damien Martyn, Australia slipped to 48/3 in the 12th over. Captain Steve Waugh came out to join Ricky Ponting at this critical juncture.

After a cautious start, Ponting and Waugh built a substantial stand. Off the last ball of the 31st over, with Australia at 152/3, a prematurely celebrating Gibbs dropped Waugh, who was on 48, at midwicket.

Ponting (69) was fourth out at 174, but Waugh added 73 with Michael Bevan for the fifth wicket. ‘Tugga’ went on to score 120* in 110 balls, ensuring Australia’s five-wicket win with two balls to spare.

Akhtar and Anwar rise to the occasion – New Zealand v Pakistan, Semifinal, Old Trafford
Pakistan, placed first at the end of the Super Six stage, locked horns with fourth-placed New Zealand in the first semifinal, and produced a dominant display to prevail by nine wickets. New Zealand started sluggishly after Stephen Fleming won the toss, losing their top three to fall to a worrisome 58/3 in the 16th over.

Fleming (41) and Roger Twose (46) repaired the damage by adding 94 for the fourth wicket.

Paceman Shoaib Akhtar (3/55), who had bowled Nathan Astle earlier, broke the stand by inflicting the same fate on Fleming. Chris Cairns motored to 44* in 48 balls, but New Zealand were restricted to 241/7, with a whopping 47 runs coming through extras.

Pakistan’s openers Saeed Anwar and Wajahatullah Wasti replied in prolific fashion, raising a stand of 194 that all but secured Pakistan’s progress to the final.

This partnership created a new World Cup record for the first wicket, and was broken when Cairns dismissed Wasti for 84 in the 41st over. Anwar proceeded to reach his second successive century, staying unbeaten on 113 from 148 deliveries, while Ijaz Ahmed made a quick 28*, as Pakistan crossed the line with 15 balls remaining.

The fiery Akhtar was named man of the match for his timely strikes.

A classic for the ages – Australia v South Africa, Semifinal, Edgbaston
Riding on a streak of five wins, the Australians were upbeat ahead of this encounter. Shaun Pollock removed Mark Waugh in the first over after Hansie Cronje elected to field, but Gilchrist and Ponting batted positively to add 51 for the second wicket.

Ponting’s dismissal to Allan Donald (4/32) led to a middle-order wobble, as Australia slid to 68/4 in 17 overs. Bevan joined Steve Waugh at this point.

As was the case in the Super Six match against South Africa, the duo rose to the task with a fifth-wicket stand of 90. Pollock came back to get rid of Waugh (56) and Tom Moody in the same over, before Bevan and Shane Warne added a vital 49 for the seventh wicket.

In reply, openers Gary Kirsten and Gibbs put the Proteas ahead with a 48-run stand. But the leg-spin of Warne (4/29), later named man of the match, turned the game around, as he snared three wickets in two overs to reduce South Africa to 61/4 in the 22nd over. 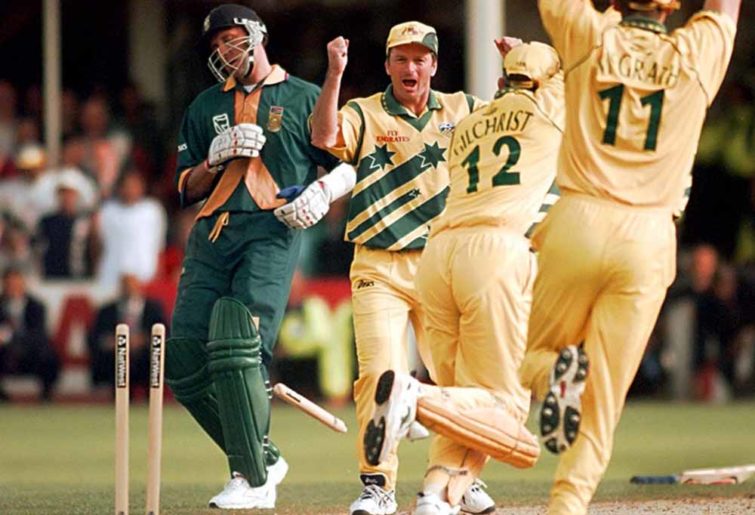 At the fall of the ninth wicket, South Africa needed 16 in eight balls and Australia were favourites. But Lance Klusener hit a six and took a single off the last two balls of the penultimate over.

As the last over – to be bowled by Damien Fleming – began, nine runs were required with Klusener on strike. ‘Zulu’ duly crashed the first two balls for four to bring the scores level, with his own score reading 31* in 14 balls.

A tie was enough for Australia, as they had a superior net run rate. With all fielders closing in, they ensured that South Africa stumbled at the last hurdle. Off the fourth ball, Klusener ran to the other end, only to find Donald unmoved.

By the time Donald could make it, the throw from mid-off had reached the bowler and on to Gilchrist, who took the bails off. This was the first tie in World Cup history.

An Australian surge at the Mecca – Australia v Pakistan, Final, Lord’s
Three days after the enthralling second semifinal, Australia met Pakistan in the summit clash at Lord’s, with both teams gunning for a second title (having respectively won in 1987 and 1992).

While the group match between the two teams had been a tight affair, what with Pakistan winning by ten runs, the much-awaited final turned out to be the opposite, as Australia cruised to a thumping victory.

Wasim Akram decided that Pakistan would bat first, and following the early loss of Wasti and Anwar, things were looking steadier at 68/2 in the 20th over with Abdul Razzaq and Ijaz having added 47.

Razzaq however perished to Tom Moody, and from that point, it was downhill for Pakistan. Warne continued his great form by wrecking the middle order, as Australia marched towards an invincible position.

Warne captured the wickets of Ijaz, Moin Khan and Shahid Afridi, before also accounting for Wasim, en route to figures of 4/33 that would give him his second man of the match award in succession.

Pakistan were bundled out for a paltry 132 in 39 overs, with only Ijaz (22) crossing 20 (Mr Extras top-scored with 25). Mark Waugh and Gilchrist responded by racing to an opening stand of 75 in ten overs.

Gilchrist reached a quickfire fifty before getting out for 54 from 36 balls, but his dismissal was a but a blip for Australia. The target was achieved in 20.1 overs, with Darren Lehmann hitting the winning four off Saqlain Mushtaq to confirm an eight-wicket win that ushered in an era of Australia’s World Cup domination. Klusener, with 281 runs at 140.50 and 17 wickets at 20.58, was named Man of the Tournament.