Rugby league’s demand for consistent application of the rugby league rules has seen referees apply those rules in a consistently incorrect – and occasionally nonsensical – manner.

Multiple knock-ons do not travel forward.

Multiple forward passes do not travel forward, either.

And when the refs do rule to the letter of the law, the absolute, what’s-written-down-in-the-book, black-and-white, technically-speaking, and all that, then Andrew McCullough can claim he missed a tackle because, as Billy Slater would tell us, he couldn’t see around Gavin Cooper.

See it last night, Broncos and Cows: Cooper was between McCullough and Jake Clifford, who scooted into a gap for a try.

McCullough, though, couldn’t see around Cooper, for a bit, until he could. And when he had ample chance to tackle Clifford, he did not. Barely got a finger on him.

Nothing to do with Cooper. He was just there, standing, out of shot.

But referee Matt Cecchin and his bunkerman declared that Cooper had stopped McCullough tackling Jake Clifford, who scored a try in every dimension of the universe other than the one which hosts our National Rugby League.

The obstruction rule, all that inside and outside shoulder stuff; perhaps it is important.

Perhaps they do need a blanket, “consistent” application of that rule.

You’d think that would be, you know, the completely freaking obvious, for dear sweet Rod Reddy’s sake!

No I don’t. For there is the knock-back, which is dead, and is my thing.

Remember Ben Hunt in golden point in the 2015 grand final? Under the letter of the law – that the ball must be projected towards one opponent’s try-line – it was not a knock-on. 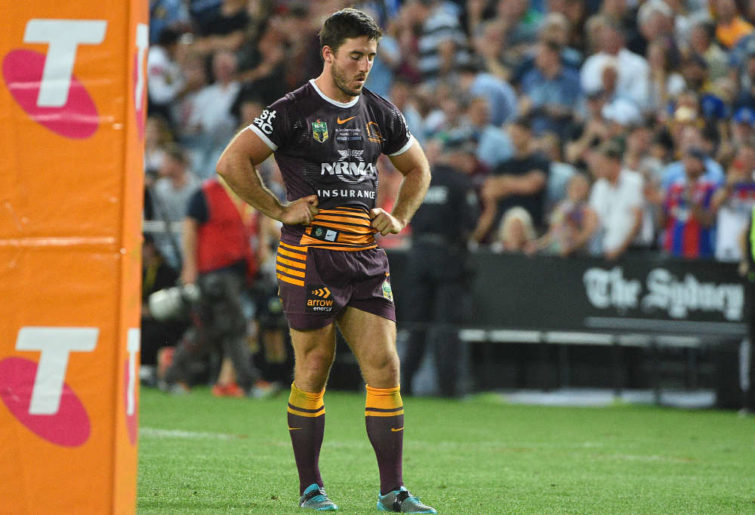 Of course as the rule is applied – as if the game is touch football which has “drop-ball” as a rule – it was called a knock-on.

But it was not a knock-on. And that’s not being pedantic. That is simply what the rule says.

Last week, Sharks and Souths, Josh Dugan put a solid shot on Adam Reynolds and the ball jolted free, backwards, towards Reynolds’ line. It spat out the back of the ruck and it was called a knock-on because that’s what happens, and everyone mobbed Dugan.

I remember another one in 2015, a semi-final, Sharks and Cowboys. It was a wet night. Johnathan Thurston grubbered and the ball went between Andrew Fifita’s legs, tunnel ball style.

On the way through, Fifita bent down and the ball brushed his fingers, and continued through his legs behind him.

How was it a knock-on?

Physics does not allow it. The ball could not have travelled forward, even INFINITESIMALLY, and then continue through Fifita’s legs. 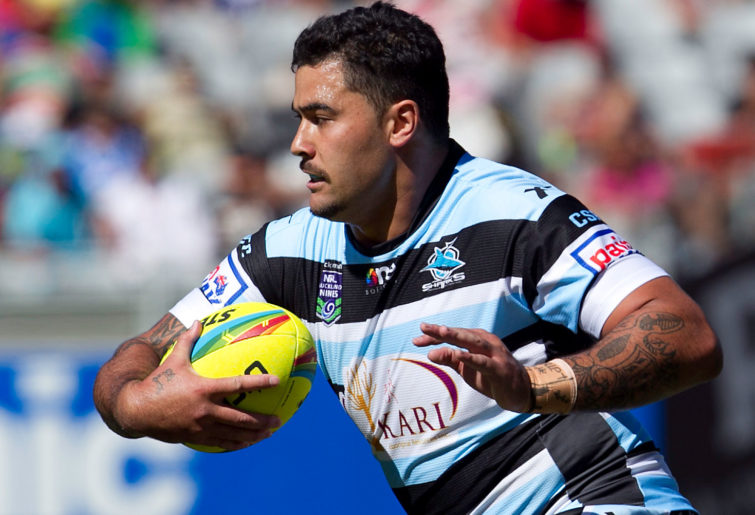 There are passes which go backwards (one assumes for they aren’t pulled up) which brush a man’s fingers and continue roughly along the same path, which are called knock-on.

Everything dropped, nearly everything, is called knock-on.

Does my fat head in. I shouldn’t care but I do. Am I the only person who cares?

Everyone else – as Hunt’s and Reynolds’ and Fifita’s knock-ons show – just cop it. They cop the ball being not being propelled forward but being called forward.

The forward pass rule says the ball has to go forward out of the hands.

Roger Tuivasa-Sheck – and thousands before him – shot a pass backwards which floated forwards as the speeding-along-the-Nullarbor-and-throwing-an-apple-out-the-window-and-immediately-stopping-but-the-apple-continuing-forward-at-150-km/h-example would attest.

League needs to re-think its mindset. It’s too negative. Too just-in-case-it’s-forward-call-it-forward.

Why not switch that on its head? Unless it’s completely, flat-out obviously howling a knock-on or forward pass – you know, as the rules say – rule it play on.

See the Raiders game against the Warriors. There was a possible, even probable forward pass by Josh Hodgson to Jarrod Croker.

It was short, off his hip, at speed, and too short and close for the touch judge to call.

And it was play on. And rugby league won. You couldn’t 100 per cent tell, so play on.

Ironically, and this is very rugby league, but had Croker been wider out and the ball gone backwards out of Hodgson’s hands and floated forward they’d have called it forward.

When it was not.

Even marginally forward ones, like Hodgson’s, call play-on if you can’t 100 per cent tell.

You certainly couldn’t tell about Hodgson’s on the fly. Even slowed down, well, maybe.

Tuivasa-Sheck’s you still can’t tell. Why call it forward? Because you want consistency?

Have it consistently advantageous to the attacking team. You’d have a better game.

The Rah Rahs rule like this unless a knock-on or forward pass is completely flat-out obvious.

And league fans might diss that because it’s Rah Rah.

But it is a better mindset to err on the side of attack.

And rugby league needs to change its mindset. Because we couldn’t 100 per cent tell on the fly Hodgson’s pass was forward, the same as RTS’s last week.

And there’s only one way to fix it. Well, not fix it. This may never be fixed.

But we need to do this: GPS chip in the ball.

We need a random match or three in any given round, or across a few rounds, in which there’s a GPS chip in the ball.

We don’t tell the referees. They just referee as they have – the negative just-in-case mindset, the way they’re told to because consistency.

Then afterwards everyone can see which way the ball actually travels on all the knock-backs, forward passes, whatever.

And we can see which way the ball actually goes, because the satellites tell the computers who tell us it’s so.

And consistency be buggered.