AFL Team of the Week: Round 22

The penultimate round of footy has finished, now lets cast our eye on the best performances from Round 22 in Team of the Week.

Back Pocket – Dylan Grimes (Richmond)
Hearts were in the mouths of Richmond supporters as Grimes went down with what appeared to be a nasty looking knee injury in the third quarter against West Coast, but the underrated defender returned to play a sterling job on the Eagles’ potent forward line. Ended with 17 disposals at a perfect 100 per cent efficiency, while he hauled in eight grabs.

Full Back – Marcus Adams (Brisbane)
Has added another dimension to an already-stingy Brisbane defence since playing his first game in the club colours seven weeks ago. Saturday was his best performance yet, holding the dangerous Tom Hawkins to just two behinds.

The former Bulldog was a threat in the air, taking 10 marks, nine of them intercepts and four of them contested, and getting eight spoils from 19 possessions.

Back Pocket – Dane Rampe (Sydney)
Continued his superb individual campaign with a stellar game on Friday night against a dismal Melbourne outfit. Rampe gained 516 metres from his 22 touches, took eight marks, three of them intercepts, and got his fist to the ball on eight occasions.

Half Back – Brayden Maynard (Collingwood)
The attacking Magpie’s form had been building for many weeks before producing a career-best effort on the road against the Adelaide Crows.

Maynard picked up a personal-best 30 disposals, gaining 594 metres in the process while also having six defensive 50 rebounds. He also took 12 marks, laid three tackles and snuck forward for his first goal in over a year.

Casboult, who has become one of the most versatile players in the competition, swung into the backline and performed brilliantly with 20 possessions, 10 marks, nine of them intercepts and six of them contested, four tackles and nine spoils.

His ability to pick off the Saints’ forward entries eventually led to Brett Ratten sending Jake Carlisle forward to apply a defensive tag. Patrick Cripps has the best and fairest award sewn up already, but is Casboult a chance for a podium finish?

Half Back – Jamie Macmillan (North Melbourne)
The often-criticised Macmillan (especially by yours truly) has had a terrific past few weeks and he was in fine form on Saturday night as the Kangaroos rampaged Port Adelaide.

Macmillan gained 534 metres from his 34 possessions, which he used at 91 per cent efficiency, while he also took seven marks to go with his six defensive 50 rebounds.

Wing – Ed Langdon (Fremantle)
Super game from the sought-after Docker, who would have had some very interested onlookers on Saturday night. Langdon had an incredible 861 metres gained from a career-high 37 disposals, while his two-way running ability was highlighted by the fact he had not only eight inside 50s, but nine rebound 50s.

Centre – Patrick Dangerfield (Geelong)
Did absolutely everything he could to will the Cats over the line on Saturday against Brisbane up at the Gabba, with the Brownlow Medallist gathering 36 touches, a massive 23 of them contested, winning nine clearances, kicking inside 50 on eight occasions and getting involved in 11 scoring chains, which included a goal of his own. 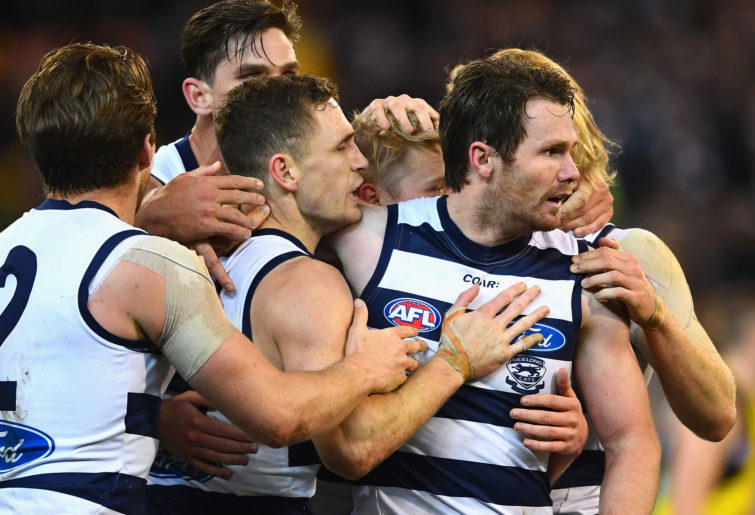 Wing – Hugh McCluggage (Brisbane)
The young star from the Lions was everywhere on Saturday, gaining 644 metres from his 27 disposals, including five rebound 50s and six inside 50s. McCluggage also had eight score involvements, took seven marks, laid six tackles and kicked a goal.

Half Forward – Jamie Elliott (Collingwood)
With just three goals from his last six appearances, Elliott had a point to prove as the Pies dismantled Adelaide on their home deck on Saturday evening.

The 26-year-old celebrated his upcoming birthday on Wednesday with a superb performance, winning 19 touches, taking 10 marks, five of them inside 50, getting involved in 12 scoring chains and kicking a bag of five goals. He is the exact type of player that could wreak havoc for the Magpies in September.

Centre Half Forward – Tom Lynch (Richmond)
The conditions after half time at the MCG on Sunday didn’t exactly suit the big power forwards of the competition, but Lynch again showed that he is one of, if not the best wet-weather key forward in the game.

The former Sun finished with 17 touches, four marks, two of them contested and two inside 50, four tackles, including three inside 50, and three important goals.

Now has 25 goals from his last eight games, and 53 for the season in total. Made for September this bloke.

Half Forward – Michael Walters (Fremantle)
Superb game in a losing effort from Walters, who amassed a season-high 36 possessions against Essendon on Saturday night.

14 of those touches were contested, while the Fremantle star also won seven clearances and gained 514 metres. Also kicked 2.2 from nine score involvements in total.

Forward Pocket – Charlie Cameron (Brisbane)
Coming off 10 goals in two weeks, Cameron’s remarkable year continued with a bag of five majors in Brisbane’s thrilling win over Geelong on Saturday at the Gabba.

Now has a total of 52 for the year and should be able to clinch a top-five berth in the Coleman Medal. The last time a Lion was that high was Jonathan Brown back in 2009.

Full Forward – Ben Brown (North Melbourne)
The best performance by a key forward we’ve seen this season, Brown toyed with the Port Adelaide defence on Saturday night as he became just the ninth player in the history of North Melbourne to kick 10 goals in a match, and the first since Wayne Carey back in 1999.

Having started the night six goals in arrears of Jeremy Cameron in the Coleman race, Brown now goes into the final round of the season with a four-goal lead and a match-up against the 17th-placed Melbourne to come.

Forward Pocket – Jarryd Roughead (Hawthorn)
The feel-good story of the weekend and probably the year was Roughead’s farewell match against the Gold Coast Suns at Marvel Stadium on Sunday evening.

Not too often is a game between a finals contender and the wooden spooner compelling viewing, but Roughead made it so.

With his Hawthorn teammates looking for him at every opportunity, Roughead saluted with a bag of six goals, his highest haul in a game since Round 3, 2015.

The game of Australian Rules Football is forever richer for the contribution Roughead has made since he debuted back in 2005.

Reckon the big fella will, if he hasn’t already, receive a phone call from premiership teammate and now Gold Coast coach Stuart Dew in the coming weeks. 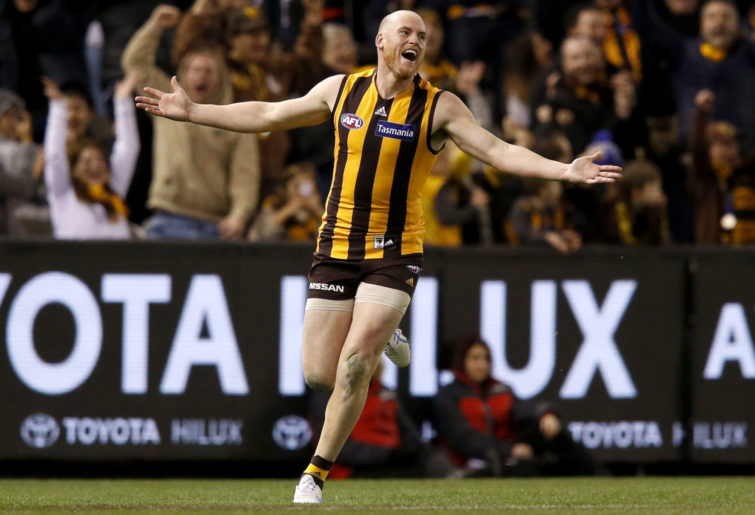 Ruckman – Todd Goldstein (North Melbourne)
Staggeringly, Ben Brown’s 10 goal haul on Saturday night wasn’t the best performance of the night. That belonged to Goldstein, who wound back the clock with a dominant display in the ruck against Power pair Paddy Ryder and Pete Ladhams.

‘Goldy’ was simply superb, racking up a career-high 34 possessions at 88 per cent efficiency, 19 of those contested, winning nine clearances, taking three marks, winning 28 hitouts, nine of those to advantage, and kicking a goal from an incredible 17 score involvements. Sign him up now, North.

Ruck Rover – Dustin Martin (Richmond)
Was sublime in the heavyweight encounter with West Coast on Sunday at the MCG. ‘Dusty’ gained a monster 887 metres from his 35 disposals, which included 13 inside 50s and eight score involvements. He also took four marks, laid four tackles and kicked a ripping checkside goal on the run in the third quarter.

Interchange – Scott Pendlebury (Collingwood)
The Collingwood skipper continued his outstanding year with a huge display against the Crows at the Adelaide Oval on Saturday. Pendlebury gained 581 metres from his 34 touches, while he took 10 marks, laid six tackles and had a hand in 10 Collingwood scores. He is a genuine Brownlow Medal chance.

Interchange – Dion Prestia (Richmond)
Along with Bulldog pair Josh Dunkley and Jackson Macrae, Prestia is one of the most in-form midfielders in the competition currently. He was massive in Richmond’s monumental victory over the Eagles on Sunday, collecting 29 possessions, 11 of them contested, winning five clearances, taking four marks and laying five tackles. A very good player in the wet, the Tigers will be praying for rain once September begins.

Interchange – Chad Wingard (Hawthorn)
The former Port star has slowly been building his form and it culminated with a huge game against the Suns on Sunday evening at Marvel. Wingard was particularly hard-nosed with 10 big tackles to go with his 22 disposals, seven marks, three clearances and two goals.

Was particularly important late in the game, kicking a goal before handing one off to Charlie Cameron. They were part of his 10 score involvements for the afternoon.

Emergency – Elliot Yeo (West Coast)
The superstar from the Eagles did his best to get his side over the line against Richmond on Sunday, winning a monstrous 15 clearances to go with his 26 touches, 18 of them contested. Also took five marks, laid eight tackles and had six inside 50s.

Emergency – Patrick Lipinski (Western Bulldogs)
The exciting young Bulldog has been very good since coming into the side mid-year and he played perhaps his best game yet on Sunday against the GWS Giants in Sydney. Lipinski gathered 27 possessions, took seven grabs, laid seven tackles and booted two goals in a polished display.

Emergency – Jeremy Howe (Collingwood)
Very good game from Howe against the Crows on Saturday, with the high-flying defender collecting 23 touches at 91 per cent efficiency, and taking 11 grabs, four of them contested and seven of them intercepts.

Took a trademark grab which, in an ordinary round would have easily been the mark of the week, however Lincoln McCarthy’s effort at the Gabba will take some beating. 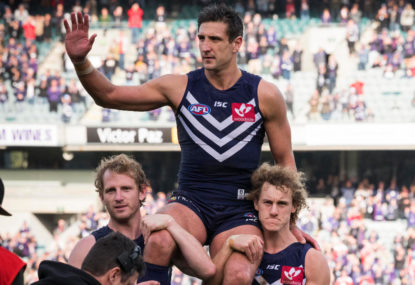