Anyone still unconvinced of the importance of the competition and the wonderful sense of community connectivity that it brings is either inherently heartless or simply foolish.

Last night’s Round of 16 action featured four matches across three states and a host of new and returning A-League faces showed their wares.

At the same time, five desperate NPL clubs attempted to qualify for the final eight of Australia’s premier knockout competition.

Edgeworth Eagles FC took on the Jets in a Newcastle derby that spoke volumes about the beauty and individuality of the FFA Cup. Defending champions Adelaide United travelled to Queensland to face Olympic FC at Perry Park whilst the might and power of Melbourne City headed north to Sydney to meet the Marconi Stallions in what loomed as a potentially dangerous speed bump on their journey towards a second FFA Cup triumph.

In the only match not featuring an A-League team, the Moreland Zebras hosted the rather oddly named Magpies Crusaders, with the Victorians firm favourites to advance to the quarter-finals.

They well and truly did the business with a 4-0 victory that surprised few and sent a quality NPL club into the last eight.

With simultaneous kick-offs, a night of FFA Cup action becomes a journalists’ nightmare when preparing a summation of the events.

Despite the chaos, the form and presence of some potentially significant A-League players in the 2019-20 season was well worth the multi-screen challenge.

Perhaps the most notable was Adelaide United’s Al Hassan Toure. The 19-year-old striker had two goals within 27 minutes against Olympic and looked a composed and imposing threat in front of goal.

Jamie Maclaren scored after just two minutes to demoralise Marconi Stallions early and Melbourne City appeared well on the road to victory in the harbour city.

However, it was the clash between the Eagles and Jets that drew most attention and for very good reason. Newcastle’s new Panamanian signing Abdiel Arroyo opened his account for the club; scoring in the 9th minute.

What followed was astonishing. Edgeworth’s old man river Daniel McBreen thumped home from 30 yards, wound back the clock and levelled the scores after 16 minutes.

It was a strike for the ages and should be leading sports’ news bulletins around the country; especially considering the 42 years of credit that McBreen has in the bank.

After 38 minutes it was another of Newcastle’s new signings who found the net, as 37-year-old former Norwich City star Wes Hoolahan finished neatly. Soon after Dimi Petratos found his way onto the score sheet with a spot kick. 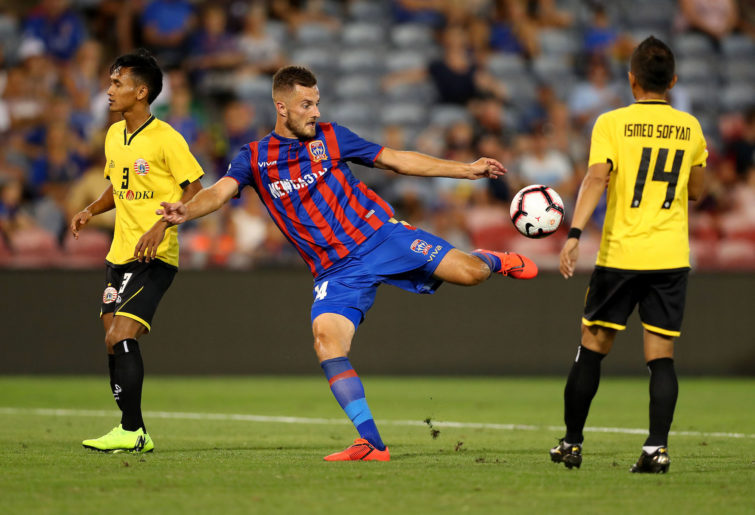 At 3-1 going into the half-time break, it appeared a bridge too far for the Eagles. It was.
Minutes earlier, Craig Noone had added a second for City against Marconi and a quality finish it was. It sent the citizens to the sheds with a clear and comfortable lead.

The Englishman may only have been in the country for a short time, yet he looks like making an enormous impact on the A-League. He reeks of a pedigree that will test domestic defences.

In Brisbane, Adelaide United held onto their 2-1 advantage heading into half-time against Olympic and the ten minute break gave everyone the chance to take a breather after a combined 11 first half goals.

That settling feeling didn’t last too long as Olympic opened the scoring in the second half with a spot kick and Adelaide United’s reign as FFA Cup champion was well and truly under threat.

Back in the Hunter, a new domestic signing with the Jets established a 4-1 lead. Nick Fitzgerald finished clinically to further the visitors’ advantage and reminded us all of just how fine a player he is, despite a disappointing and unfulfilling time at Western Sydney last season.

Sadly, Edgeworth fell away in the second half, Petratos scored his second in the 77th minute and fatigue became a serious issue for the home side.

As the evening drew towards a close, Adelaide earned a penalty, George Blackwood converted it and Reds fans sighed with relief as their team took a 3-2 lead with ten minutes remaining.

With calm restored and the A-League clubs seemingly secure and on their way to the final eight of the FFA Cup, Marconi scared the heck out of City Football Group with a late goal to maintain hope at 2-1 down.

However, for fans of the ‘cupset’ it was not to happen. The Reds held on against the gallant Olympic, City held Marconi out in the final moments and the Jets final 5-1 result against the Eagles was reflective of the general flow of the contest.

It was a great night of FFA Cup action where Craig Noone, Al Hassan Toure, Wes Hoolahan and Abdiel Arroyo announced themselves to the Australian footballing public.

Nick Fitzgerald, Jamie Maclaren, Matt Millar and the Moreland Zebras also impressed yet the real winner was this rather unique and quirky competition that continues to capture the imaginations of football fans.

Next Wednesday, the Roar, Mariners and Wanderers will have their chance to advance. I can’t wait.