I was fooling around with the NRL ladder predictor this morning and stumbled across a possible – albeit unlikely (ok extremely unlikely) way the Bulldogs can scrape into the top eight. This was surely one of the most unlikely outcomes imaginable even a month ago.

The best bit is, while ferociously unlikely, it doesn’t rely on 80-0 victories, 13 consecutive draws or outrageous upsets over the last three rounds.

The Dogs are currently on 18 competition points with fixtures against the Eels (a) Cowboys (a) and Broncos (h).

Three wins will put them on 24 points. The Eels at Bankwest is probably the toughest test, although a trip to Townsville is never easy and the Broncs may well be playing for their season in Round 25. However, with the Dogs in a bit of a form surge, none of these games are un-winnable. 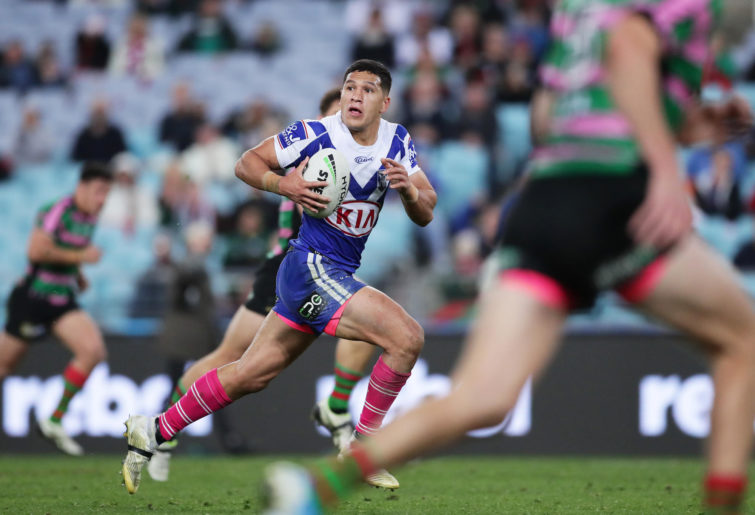 Dallin Watene-Zelezniak and the Bulldogs… How far can they go in 2020? (Photo by Matt King/Getty Images)

With a current for and against of -166 it’s pretty safe to say that any team that also finishes on 24 points will finish ahead of them.

So, let’s look at the chances of the six teams (realistically) competing for seventh and eighth spot.

The Broncos are on 23 points, with the Sharks and Panthers on 22, so the Dogs can’t afford any of them to win a single game.

The Broncos have Rabbitohs (h) Eels (h) and Bulldogs (a).

Two home games are an advantage but none of these are easy games. Three losses is not unlikely, especially with the judiciary doing their bit with a couple of timely suspensions.

The Sharks have Warriors (h) Raiders (h) and Tigers (a). Things are pretty grim when your season relies on the Warriors winning away from home.

You’d think the Raiders have the Sharks measure as things stand and Round 25 could go either way.

The Panthers have Cowboys (a) Roosters (a) and Knights (h). Again, this weekend looks to be the Dogs’ biggest threat. The Roosters should have Penrith’s measure next week and Round 25 is another 50/50 with both the Knights and Panthers season likely to be on the line.

Dogs fans will be cheering on the Knights over the next three weeks. Newcastle are on 20 points and have the Tigers (a) Titans (h) and are away to the Panthers. We need the Knights to beat Wests, we’ll assume they have the Titans covered and of course, we can’t afford the Panthers to win any.

The Tigers are also on 20 and face Knights (h) Dragons (a) and Sharks (h). We can afford for them to win one. We need them to beat the Sharks, so the blue and whites will be cheering on the Knights and Dragons if we’re still alive.

That’s an horrific thought on its own.

The Warriors are currently on 19. The Dogs can afford for them to win up to two of their remaining games. They have the Sharks (a) this week – which we absolutely need them to win. If they do get up we then need one of the Rabbitohs (h) or the Raiders (a) to knock them over.

If the results do go as mapped, the Knights would finish seventh with 26 points and the Dogs clear eighth on 24.

By my calculation of the 24 remaining games the Dogs need results to go their way in 14 of them. The TAB is offering $1,001 for the Dogs to win the premiership.

A successful 14-game multi will earn just shy of 13 grand for a $1 investment.

So, it’s absolutely false hope, but after the black hole season Bulldogs supporters have endured false hope is infinitely better than no hope at all.

Having said that it could all be over by 9:45 tonight.