More to Russian defeat than met the eye

Russia were beaten by Italy in their World Cup warm-up fixture at San Benedetto del Tronto last weekend, predictably enough, though it appears there may have been a little more to the Azzurri’s one-sided victory than met the eye.

Russia only qualified for this year’s World Cup in Japan by default, after Romania and Spain were both disqualified from the qualifiers for breaches of the eligibility laws. The Bears actually finished fourth in last year’s European Nations Cup.

A 70-point loss to the Six Nations wooden-spooners will have nonetheless raised a few eyebrows. Just a couple of months ago, Russia defeated both Argentina B and Namibia at the Nations Cup in Uruguay, finishing runner-up to the host.

So what happened in San Benedetto? Primarily, it seems, a lack of thorough preparation. Russia’s solitary fixture before departure was a 40-0 romp against a local club selection in Moscow.

They had been invited to Krasnoyarsk, in the heart of Siberia, to play a team made up of the nation’s two most powerful clubs. This would have provided sterner opposition, while also tying in with celebrations to mark the 50th anniversary of rugby’s foundation in the city.

But a five-hour flight east a week before heading to Italy was not on the national team’s agenda. Meanwhile, a further warm-up match has been arranged against second-tier British club, Jersey Reds, in Moscow on August 27. Russian head coach Lyn Jones, a former Wales international, has a son playing for Jersey. 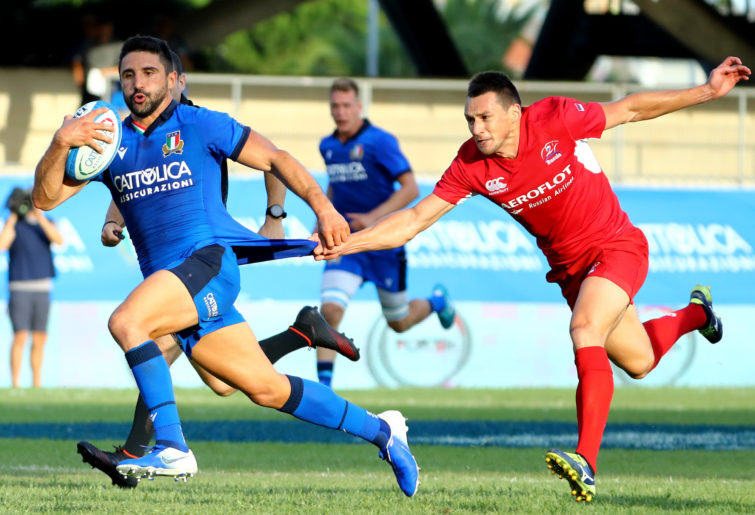 There have been rumours of a developing rift between the capital and Krasnoyarsk, with claims the latter’s players are being restricted by a quota system at national age-grade level. Meanwhile, Europe’s second-tier club competition, the Continental Shield, appears to have fallen by the wayside, with no fixtures announced for the coming season.

Enisei collected their third title in 2018, defeating Germany’s Heidelberger in the final. The year before they had overcome cross-town rivals Krasny Yar 36-8 at the Murrayfield Complex in Scotland. Thus they progressed to the European Championship, receiving invaluable experience against professional teams from first-tier nations.

Further rumours suggest the Russian pair may look east rather than west in search of an alternative competition – or perhaps even south. Krasnoyarsk could be a perfect fit for Rapid Rugby, either individually or as a combined team.

The vast distances involved would appear to be an obstacle. Krasnoyarsk, a city of a million, lies due north of Mongolia, 10,000 kilometres from Perth. But that wouldn’t be an awful lot further than Western Europe for the Siberians, while the Force are no strangers to extensive travel requirements themselves.

Of course, there is also the question of whether the Russian clubs would be up to standard. There are over 300 clubs and a professional first division attracting foreign imports, notably from South Africa. But to keep things in perspective, the nation’s 22,000 registered players from a population of 145 million gives the game a popularity rating similar to Taiwan’s and Morocco’s per capita.

Rugby was actually introduced to Russia before football, in the 1880s, but struggled to gain a firm foothold due to police clamp downs and political upheavals. It is believed to have been outlawed for a time under Soviet rule, though one player who made an impression abroad was Prince Alexander Obolensky – scorer of two tries in a famous victory over the All Blacks in 1936!

Official competition resumed in the late 1950s, though the Soviet national team did not take the field until the mid-1970s, when they trounced Czechoslovakia 28-0 in Leningrad (now St Petersburg). By the end of the decade, they had earned promotion to the FIRA first division (the precursor to the European Nations Cup), and debuted with a win over Italy.

Indeed, the USSR would vie with the Azzurri for third place in the competition behind the French XV and Romania.

The Soviets were to have been invited to the first World Cup but had made it clear they were unwilling to attend due to South Africa’s presence on the international administrative committee during the Apartheid era. In 1991, they also declined to participate in qualifying.

The Soviets toured both Australia and New Zealand shortly before the state’s dissolution, however, and made quite an impression. In 1990 they won their first two games on a six-match tour of Australia, which ended on a bizarre note when an Australian TV viewer’s complaint about the visiting players went all the way to the Kremlin, resulting in suspensions!

A year later they travelled to New Zealand and won precisely half of their eight matches, including one against King Country, then competing in the national first division. Though they were beaten 56-6 by the New Zealand XV in Hamilton, local pundits rated the tourists a better side than the Romanian squad that toured around the same time and lost 60-30 to New Zealand Emerging Players.