Building up a real Melbourne derby

When Melbourne Heart were founded in 2009 they created the A-League’s first derby, which quickly became a big event on the sporting calendar.

The takeover by City Football Group in 2014 generated a bump of renewed interest in the fixture, but this has since dropped off again, with a missing sense of the tribalism that there is in Sydney. To counter this, the FFA gave a licence to a new team in Melbourne’s west and gave the new club a clear geographic point of difference.

It looked like a good turnout for Western United in their first preseason match with a respectable 3300 fans in attendance. But if they want to grow as a club, a lot will come down to the success of the derby with Melbourne Victory.

Western United coach Mark Rudan has said that the current City-Victory derby “lacks a proper derby-type of atmosphere”. He also made the point that it lacks the same geographic divide that there is in Sydney, which is what his team will try to replicate in Melbourne. He added, “We are very clear on who we are and what we represent, and that’s the west part of Melbourne, all the way from the West Gate Bridge”.

By comparison the current derby could even be called the Seinfeld derby. Most derbies have a clear point of difference between the teams based on geography, social class or political or religious differences, but the current derby has none of these – it’s a derby about nothing, because Melbourne City don’t clearly represent anything.

I think this is something they could play up by calling the new derby the ‘West Gate Derby’ to emphasise who they represent geographically. They could also call it the ‘Real Melbourne Derby’ while referring to the current one as ‘The Seinfeld Derby’ just to have a subtle dig at City. This will be enhanced not just by Western United’s clear geographic point of difference but also by owning their own stadium as well.

Western United’s first derby will be against Melbourne City on 27 October, while their first meeting with Melbourne Victory will be on 2 November. This leaves a couple of months to wait, during which time they could build up the rivalry in the media by getting comments by club officials and players as well as from local mayors, councillors and politicians, all of which would help build the tribalism during the run-up. Seeing a few of them in scarves wouldn’t hurt either.

If the ‘Real Melbourne Derby’ is successful and helps build the club’s fan-base, it could also start to raise questions about whether Melbourne City should relocate to Dandenong to generate their own tribalism, something they currently lack. That could add another interesting source of intrigue.

Over their first season Western United will have six derbies against the two current Melbourne sides. If the derby between the new side and the originals is to eclipse the current derby, they will need to go out and start building it up as such.

Western United’s success attracting fans during their early nomadic years could depend on it.

The FFA has postponed Monday night’s A-League clash in Perth between the Glory and Western United amid uncertainty over United’s travel situation.

Western United coach Mark Rudan says all A-League games should kick off after 6.30 pm to avoid players battling extreme heat in the summer.

Tribal Sports Group will host a blockbuster #FootballForFires friendly at ANZ Stadium on May 23 and founder Lou Sticca has some interesting thoughts on where our football is headed. 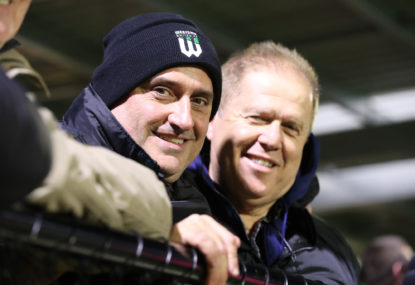