In the final weekend of Super Netball, the Greater Western Sydney Giants beat the Fever to seemingly sneak into the semi-finals.

A day later though, Collingwood rallied under some challenging circumstances to put a big win on the board and take home three bonus points, which put them into the top-four by 0.62 per cent and sent GWS packing.

So it all comes down to the final four teams: Sunshine Coast Lightning, New South Wales Swifts, Melbourne Vixens and Collingwood Magpies.

Will the Lightning be crowned champs for a third time? Can the young Swifts fire up for the finals? Or will one of the Melbourne sides hold the trophy high on September 15?

All will be decided in the coming three weekends of play.

It is the classic top-four finals road map; one part of the fixture Super Netball has always got right.

Let’s take a look at the teams and their chances in finals in 2019.

1. Sunshine Coast Lightning
The Lightning’s line-up is very different from their past two seasons, but they have put together another brilliant 12-win, two-loss effort and are certainly the team to beat.

It is their first minor premiership and the team will relish the opportunity to play finals at home, particularly if they win the major semi and get to host the grand final.

Departing head coach Noeline Taurua, the mastermind behind the Silver Ferns’ World Cup success, has all the answers and has brought new faces together to form a winning team.

Sunshine Coast only lost to the Magpies (Round 1) and Vixens (Round 6) this year.

Superstars Laura Langman and Karla Pretorius have dominated the court, while Phumza Maweni and Peace Proscovia have been steady pillars at either end.

They will go in confident against the Swifts this weekend – having already defeated them twice this year, even if only by two goals each time – and will possibly play them for a fourth time in the decider.

If that’s the case, the Lightning should continue their success, in front of a home crowd this time.

2. NSW Swifts
NSW dominated the first half of the year, beating all but the minor premiers.

Things took a slight dip after they lost captain Maddy Proud to an ACL tear, but the girls steadied to a 3-2 ledger post-World Cup.

The Swifts’ goal circle combination of Sam Wallace and Helen Housby is impressive, and the addition of replacement player Natalie Haythornthwaite has been successful in attack.

After a little gelling time, the wing attack has found her groove alongside fellow England star Housby in goal attack.

Sarah Klau recently re-signed with the Swifts and will be looking forward to playing a big role in the finals, following her international debut with the Diamonds at the World Cup.

NSW were hit hard by injury throughout the season, though they’ve had a fairly consistent line-up for a few weeks now.

It will be interesting to see if this team of young talent, who have stuck together through controversial circumstances at the end last season, can put on a show to end the year.

While the Swifts are unlikely to win the major semi-final on the Sunshine Coast, they should topple either Victorian team in the preliminary final to get another crack at the reigning premiers in the grand final.

3. Melbourne Vixens
The Vixens face a big challenge to make it through the first week of finals.

Collingwood has had the wood on them this season, winning two from two, and as far as individual match-ups across the court go, the Pies have the advantage.

The Vixens used nine out of ten players and tried various combinations – even putting Caitlin Thwaites into goal attack – and unfortunately it could not gain them control of the game.

Melbourne might have a quality line up of Diamonds players, but they have not been able to compete well enough with the best players from around the world.

Yet to beat a fellow top-four side, the Vixens won’t start this weekend.

This will be a competitive game and finish closer than last week’s 11-goal margin, but the Magpies will edge out thier rivals once again.

4. Collingwood Magpies
They snuck into the top-four with an 11-goal win over the team they will come up against this weekend.

Collingwood are short on personnel – particularly in the midcourt – after losing sisters Madi Robinson and Kelsey Browne to ACL injuries (Browne’s as recently as round 13). They’ve also been without their coach in Rob Wright, who has taken personal leave to be with family.

However, this has all inspired some big performances to secure a finals place in 2019.

Nat Medhurst and Shimona Nelson are combining exceptionally well up front, while the defensive duo of April Brandley and Geva Mentor restricted the Vixens to less than 50 goals.

The Magpies are on a winning run and in form, unlike the Vixens who have now lost their last three.

The finals derby will be held at the State Netball and Hockey Centre, a disappointing venue with only 3000 capacity, but the best option after the league could not secure Melbourne or Margaret Court Arenas.

Collingwood will get up this weekend, but lose to the Swifts (or indeed the Lightning, should NSW win the major semi-final) in the preliminary final the following week.

There should be four quality, tight games coming up. If you’ve got different ideas with this final series, share your tips in the comment section below!

The Roar will have coverage of all games, with live scores and a blog beginning on Saturday, with the Sunshine Coast hosting NSW Swifts at 3pm (AEST). 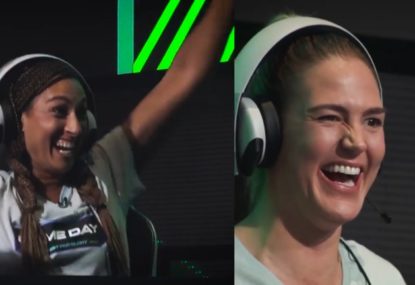