The A-League without a salary cap? Be careful what you wish for

John Didulica’s recent comments in regards to the A-League salary cap and his view that it lies at the cornerstone of a broken system of equalisation were interesting.

Not in the least due to the fact that his belief is commonly held and that the cap’s removal is seen as a necessary step for the league, but also considering what might become of the competition should the broken be fixed.

As chief executive of the Professional Footballers Association and with a glossy new report to support his words, Didulica’s positioning on the issue is important to note. Of course the head of the body would cite the 85 per cent of surveyed players and their support for the removal of the cap.

Why wouldn’t they support it? Just like you and I, they would like to earn a little more money. Human nature, really.

However, are they a little misguided in their belief that each and every player would benefit? The internal report cited the vast 47-point gap between first and last on the 2018-19 A-League table come season’s end.

It implied that a chasm exists between the clubs consistently battling for A-League glory and those making up the numbers, citing the 43 per cent of last season’s matches that featured a clear winner by two goals or more.

Some may argue that clubs will always rise and fall on the basis of recruitment, injury, luck and form. Perth Glory might be a case in point for those of that view, with their premier’s plate-winning season based around a new manager, a few shrewd recruitment decisions and a good old fashioned defensive steel that had been missing for some time.

Without a trophy in the A-League era, the Glory finally got things right and it took far more than money to do so.

Others take a more cynical view, using Sydney FC and Melbourne Victory as the haves in the discussion and others as the have-nots. Supporters of that hypothesis will cite the eight cumulative A-League championships shared between the two clubs and allude to something being quite rotten when it comes to parity in the league. 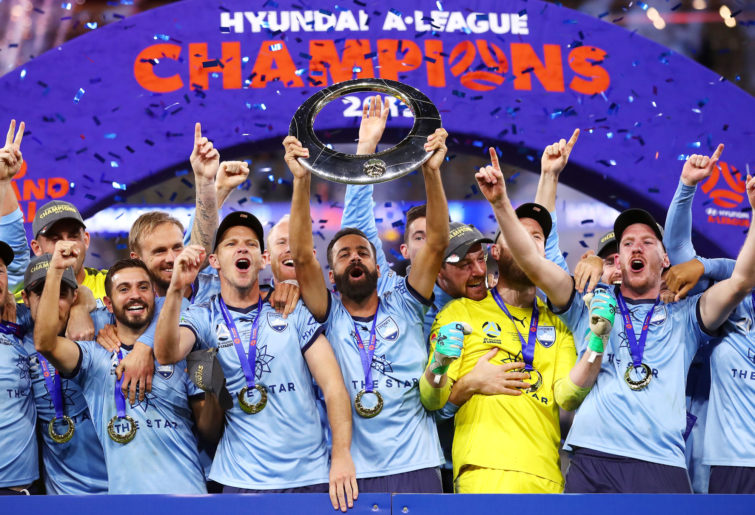 Whether Sydney and Victory have enjoyed such success through nothing more than efficient front offices, astute signings, quality coaching and development – and without a clear and inbuilt financial advantage – is somewhat debatable.

Fears that the removal of the cap would potentially enhance their power in the A-League market place are not unfounded.

There is no doubt that a loosening of the purse strings is something that the Victory and Sky Blues desire. The City Football Group would also no doubt be keen to invest whatever they deem necessary to bring a championship to Melbourne City. The Western Sydney Wanderers would also be fine, with Australia’s biggest city possessing more than enough resources to support two sizeable clubs, Macarthur pending.

Brisbane Roar enjoy the luxury of being a one-city team, as do Perth and Adelaide. However, the key question then becomes how the remaining A-League clubs cope with a potential change to the salary cap system and whether any fallout is desirable or sustainable.

The Central Coast Mariners, Newcastle Jets and Wellington Phoenix survive on the back of the $3.2 million salary cap. Without it, they may not.

It is simplistic to say, “So what, that’s football”. However, any potential torpedoing of clubs could well turn the A-League into something of a farce in the eyes of the Australian public.

With a fully functioning system of promotion and relegation there would be no issue. Those clubs incapable of swimming with the big fish would simply assume their place in the second tier and attempt to build their way back.

And that is why A-League fans need to be very careful what they wish for, because there is no such system currently in place and the fluidity of movement we see in natural football attrition all around the globe could in fact prove quite destructive in Australia.

The scope for powerhouse teams to develop on the back of considerable financial investment undoubtedly exists and it does not necessarily damage the overall profitability and success of individual leagues when powerful clubs dominate. German, Italian, English and Spanish football are clear examples of that fact.

However, while the minnows grapple away on the bottom rungs, having their time in the sun and moments in the tempest, full participation at the top level is protected by a second tier. There is always a club on the rise, ready to take their place in the top league for at least for a year or two.

Australia does not enjoy that luxury just yet.

A craving for bigger signings, investment and an improved overall product would no doubt be met without a salary cap. A handful of clubs would jump for joy at the mere thought.

However, whether Australian football can afford to lose its safety net and accept what may or may not happen to other clubs is a vital question.

Pulling that lever and removing the cap could be a dangerous path to tread.