He was not chaired off, which suggested he was a chance to go around again. However the announcement soon came that Luke Hodge had retired from the AFL.

It’s quite the rap sheet for the Geelong Falcons product.

The 2001 National Draft goes down as the greatest that the AFL has ever produced and Hodge was the name called out at pick number one. I wonder if Fremantle regret trading that pick before draft night for Luke McPharlin and Trent Croad, who later returned to Hawthorn after just two seasons at Fremantle.

It didn’t take long for Hodge to make a mark at Hawthorn, playing in 15 games and earning a Rising Star nomination. In his first season, he quickly cemented his spot in the Hawthorn side but was often compared to the bloke they overlooked in the 2001 draft, Chris Judd, who had already become a Brownlow Medalist by 2004.

At the time there were plenty of questions asked as to why the Hawks didn’t take Judd. Fast forward to 2017 when his time at the Hawks was up and I don’t think many question Hodge’s selection back in 2001 anymore.

Hodge played 305 games for the Hawks. He will go down as one of the club’s greats and will forever be remembered as a big-game player. Two Norm Smith medals for his best-on-ground performances in the 2008 and 2014 grand final wins prove that he is a big-game player. Most footy fans will have some memory of Luke Hodge doing something in a big final, whether it is a big-time goal or a bone-crunching tackle. He always found a way to impose himself when it really mattered. 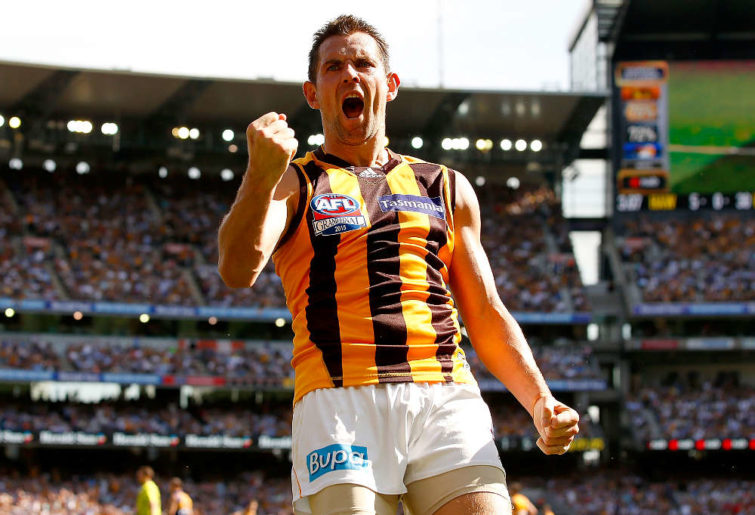 Not many people ever expected to see him in anything other than the brown-and-gold number 15 guernsey, but that’s exactly what happened in 2018 when he found his way to Brisbane for a mentoring role with the young Lions.

His time at Brisbane only added to the prestige of Luke Hodge. The side went from five wins in 2018 to 16 wins and an unlikely top-two finish this year. His leadership is often spoken about and without him there is no doubt Brisbane wouldn’t have developed as quickly as they have.

His on-field leadership was on full display in the semi-final loss to GWS on Saturday night, often seen pointing and directing his young team-mates.

Whether you loved or hated Hodge, he demanded your respect. He was rarely beaten and made his opponent earn every kick they got. His grunt and trademark raking left boot off half back will be missed in the AFL for years to come.

The mark he left at Hawthorn was astronomical, being an integral part to some glory years at the club, and what he has done at Brisbane has taught a very young group how to win games of football.

Luke Hodge will forever be remembered as a Hawthorn legend and a great of the modern game, and his legacy will be spoken about for years to come.