They won their final two round robin matches, outclassing Tasmania with a strong bowling display and putting together a strong batting performance to chase down Queensland. Rain and a solitary run then sensationally cost them a semi-final berth.

By the end of the tournament, teenager Jack Edwards became the state’s leading runscorer, with an attacking half-century against the Tigers and a classy hundred a few days later against Queensland making him the youngest player in domestic one-day history to achieve the feat. All-rounder Daniel Sams also showed plenty with both bat and ball, quickly earning himself a full state contract after coming into the season without one.

For the first time in seven seasons the Blues will play a majority of their one-day matches outside Sydney. Queensland and South Australia will provide the young side with tough opposition in their opening matches at Allan Border Field; however, the potential inclusions of international players for some of the later matches could square things up.

Top order
Jack Edwards was the leading runscorer for New South Wales in last year’s One-Day Cup, finishing the tournament with an average of 54, while Daniel Hughes has been one of the most reliable performers in the competition for several years, averaging 51 across his one-day career. Throw in the classy Kurtis Patterson at number three and the top order looks solid.

International stars
Cast your minds back four years when the Bangladesh Test tour was cancelled and the NSW one-day side was an unstoppable force, made up almost entirely of international players. Some or all of Steve Smith, Dave Warner, Pat Cummins, Mitchell Starc, Josh Hazlewood and Nathan Lyon could suit up for back-to-back games against Western Australia at Drummoyne Oval. There is also a chance that if Warner starts the Shield season poorly, he might be dropped from the Test side, which could benefit the Blues for their late-season road trips to Melbourne and Hobart. 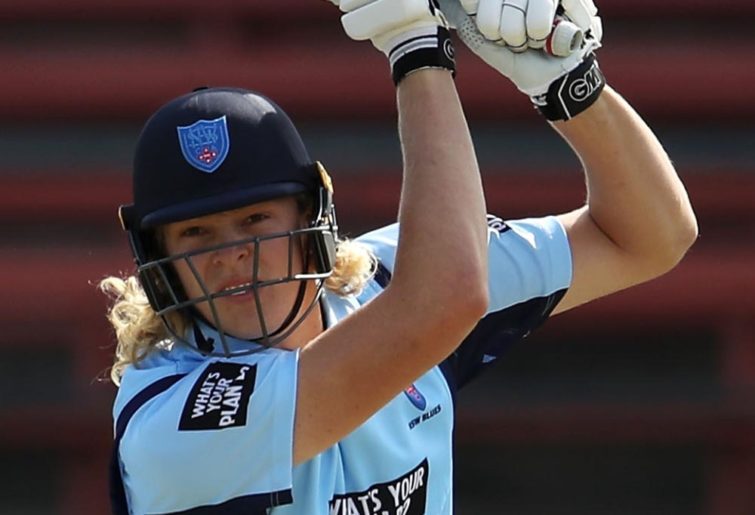 Inexperience
The NSW side is likely to feature a glut of international talent for one game and conversely almost none in other matches. Four players in the initial squad are uncapped, which is exciting for the future, but you wouldn’t be surprised if the Blues were to cop a few heavy losses when things aren’t going well. A lot of responsibility will once again fall on the experienced shoulders of Kurtis Patterson and Moises Henriques to steer the ship throughout the middle overs.

Death bowling
The Blues lack a genuine defensive bowler to keep it tight at the back end of the innings. Daniel Sams was tried and tested for the Sydney Thunder in last year’s Big Bash League and unfortunately leaked runs. Sean Abbott’s history in the BBL also suggests he isn’t an effective option in the final overs of a tight chase. Victoria’s Scott Boland, the Redbacks’ Kane Richardson and Matt Kelly of the Warriors are all genuine death bowlers capable of performing a role for their respective states, yet it remains to be seen how NSW will handle the situation when it arises – that is of course for the matches Mitch Starc and Pat Cummins don’t play in.

Arjun Nair
It’s been a tough couple of years for the young all-rounder, who was banned from bowling for three months in early 2018 as a result of an illegal action before losing his state contract earlier this year. Still only 21 years of age, Nair has time on his side and could once again earn a Cricket NSW contract if he manages to play at least four of the one-day matches. The selectors have put a lot of faith into him, so much so that he is the only spin bowler in the 14-man Blues squad for the opening matches in Brisbane.

Nair can also bat just about anywhere in the order, having opened for the Cricket Australia XI several seasons ago and for the Sydney Thunder in the Big Bash on the odd occasion. Realistically he’ll probably find himself somewhere in the lower-middle order, where it is hoped he can combine his attacking mystery spin with powerful stroke play.

Nick Bertus
By head coach Phil Jaques’s own admission, Bertus has “literally knocked it out of the park” during the preseason trials. Before training with the Blues over the preseason, the Parramatta captain dominated the Sydney grade scene, scoring over 1000 runs in each of the past two seasons. At 26 he’ll look to provide a stable middle-order option in a side likely to be brimming with youth. At this stage it’s likely he’ll play in the Blues’ opening clash against Queensland on Sunday, but he might be squeezed out if international stars are to return for matches against Western Australia in a fortnight.

Considering a lack of depth in comparison to other states due largely to the assumed unavailability of international players as well as a change in the structure of this season’s tournament that will see NSW play at a variety of larger grounds, it is difficult to see the young side advancing to the final. If the Test stars were to put their hands up to play in a few of the matches, the Blues would temporarily transition into a fierce side and could cause a few problems for other states.