When the initial heartbreak of losing a preliminary final settles, fans of the Geelong Football Club may look back at the 2019 season with great fondness.

With 11 wins out of the first 12 games to start the season, Cats supporters and other footy fans would have been excused in general agreement by the assumption that a rampaging run to the premiership was but a foregone conclusion.

However, then came the bye in Round 13 – and has been the case in virtually every season since 2012, Geelong let the foot slip off the gas pedal.

They went 5-5 the rest of the way, and the loss-win-loss-win, lather-rinse-repeat form in those last ten matches of the home-and-away rounds raised doubts within the AFL’s greater community about their pedigree for premiership glory.

So why does Geelong come up with the Jekyll-and-Hyde type of results before and after the bye round over the last several years?

The reasons to explain these are as elusive as explaining phenomena like Stonehenge or the Loch Ness Monster.

However, truth be told, they did capture the minor premiership this season – by percentage points over Brisbane and Richmond – on account of that hot start, losing only to Greater Western Sydney in Round 4, and finishing on top after 23 weeks remains a great accomplishment unto itself.

But reasons as to how they finished on top of the ladder, as a tribute to the season, became obvious for all to see.

One of the season’s best stories has been about Tim Kelly’s ascension to the elite AFL midfielder class in just his second campaign.

The Cats may possess midfielders and followers that have achieved greater accolades among a group which includes players along the lines of Gary Ablett, Patrick Dangerfield and Joel Selwood, but Kelly’s ability to create his own learning curve may very well result in him eclipsing even these great players in due course.

Kelly has oftentimes overshadowed even these great players to project profound impacts on matches with his ability to run, carry, make pinpoint disposals, and kick the odd goal here and there. (Spoiler alert: there may be another Brownlow Medalist among this group come Monday night.)

Even as Kelly’s reputation has grown, his ability to attract added defensive attention has made the likes of Ablett, Dangerfield, Selwood, et al, even more dangerous going forward. Not to mention that all of this has come amid the pressure of ongoing contract talks and rumours that he may not be at Kardinia Park next season in favour of a return home to a Western Australian club. 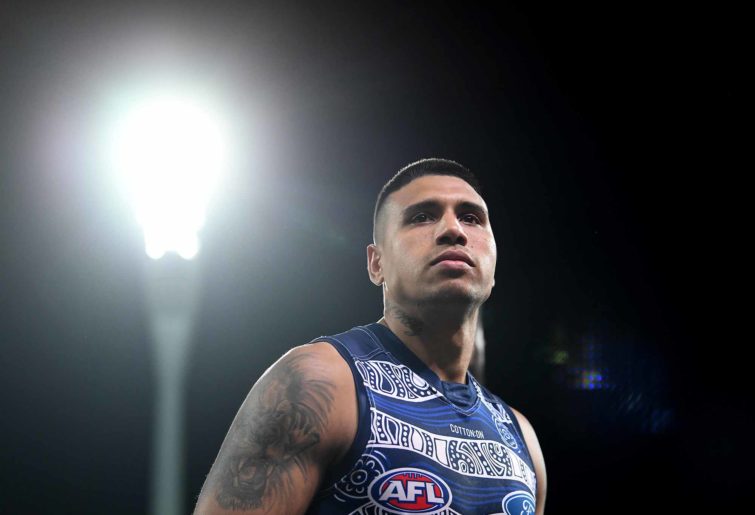 As unsung heroes go, Cam Guthrie’s influence as a link from defense to midfield cannot be undervalued. It is hard to believe that he’s already been a part of the Cats’ set-up under coach Chris Scott for nine seasons, having made his debut for the 2011 premiership winners.

But those years of experience have taught him to adjust his style of play according to the situation – to either make darting runs into open space out of defense, or to display toughness and commit the types of one-percenters required to turn games on their heads.

Guthrie has been able to not only go back and forth between those styles more than ever in 2019, but also raise the levels of such efforts to fully complement a talented core of players.

The emergence of a defensive pairing of Mark Bliclavs and Tom Stewart also rose to prominence, especially whenever opposition teams were kept to low scores.

Bliclavs revealed some new versatility to the club when asked to move to full back, where his height, leaping abilities, and organisational skills allowed him to fit right into the new position. And Stewart – in addition for being able to showing an uncanny ability to thwart opposition attacks in a timely fashion – has displayed a great ability to shut down key forwards with sublime skill.

And up forward, Tom Hawkins remained in the thick of the Coleman Medal tally until late in the season, but always found a way to get his teammates involved.

Esava Ratugolea came into his own as a half forward option in Geelong’s attack, but the likes of Gary Rohan – who gave the Cats’ forward structure a different sort of cutting edge after his offseason move from Sydney – along with Gryan Miers, Luke Dahlhaus and Quinton Narkle, all reveal that the Cats’ forward line is far from a one-trick pony in Hawkins’ talents, but rather benefits from his unselfish play.

Is the best yet to come from Geelong?

That remains to be seen, in future years.

But with the blend of Premiership-laden players as well as their carefully-nurtured younger players and veterans given new life from other clubs, Scott and the Cats’ football department have set the club up for consistent success for a number of years to come.