When fear destroys your premiership

I play indoor football, and I don’t have the greatest sports psychology in the world.

It took me until I was 32 to be a part of any championship team, and until it happened I would approach each mini-season we started successfully with the same dreadful hope and fear: will this season finally be the one?

Come finals time, you are playing not just against your opponent, but against that fear that this may be your one glorious chance that may not come again – ever – in your career. We are only ever getting older, after all.

The next season starts a week after the grand final in amateur sports, so there are new chances and our emotional longings are overly melodramatic. But we are creatures of want – humans want stuff, often badly, and our fear usually defeats us far more than the situation ever does.

This is all lead-in to an unusual, torrid series of AFL grand finals that arguably stretched from 2006 to 2013, when almost all losing grand finalists could blame shocking kicking for goal.

I love my lists of historic grand finals. I will skip the surreptitiously awesome 2006 grand final, as West Coast deserved to beat Sydney, but then-gun forward Barry Hall missed two set shots from 20 metres and Sydney lost by one point. Hall basically lost the plot for a few years after that match, as the king hit on Brent Staker attests.

2008
This is arguably the king of double-juggernaut grand finals, with ineluctable consequences not just for two clubs for a decade but also my friendship group. I re-watched it this week and it is a bloody spectacular match. Meanwhile all good Geelong people shudder at the mere mention of this year.

Geelong blew a 23-1 season on this game, kicking 11.23 to Hawthorn’s 18.7. In reality there were numerous rushed behinds, but the fact remains that some of Geelong’s misplays are a travesty of what a competent team should do in front of goal, never mind one as historically spectacular as the Cats.

This is the first of three consecutive years where the minor premier mostly dominates the grand final but throws it away on incompetence in the forward 50.

My theory is that a club will play a fearful first grand final, followed by a second one in which they are free to realise, “Hey, it’s just a game, right?” and be able to show their skill with no psychological blockage.

Quite why this happened to Geelong the year after playing free as birds in 2007 is a tad unfathomable. Cameron Mooney, after scoring two gems in the first quarter, after his famous miss on the half-time siren completely fell apart as the match progressed, basically one of the worst individual performances you’ll ever see.

He has admitted to simply assuming the after-the-siren goal and mainly focusing on running through the man on the mark after his kick. Instead he missed it, then hit the post from 25 metres in the first minute of the third. After that his game is a series of fumbles, misplaced passes and terrible decisions when, contrary to our memory of the Stuart Dew blitz, the game was still up for grabs in the last quarter.

There is also the Brad Ottens’ clunky miss, and myriad others. Hawthorn, of course, put all their shots in and won running away.

Does shonky goal-kicking relate to fear, nerves, confidence? Or is it merely a technical skill? The correlation, if not causation, is striking.

Geelong’s redemption game is 2011, when they were psychologically freed up by previously beating St Kilda. Against Collingwood they scored a series of around-the-corner rugby chips with aplomb. This was Collingwood’s freedom game as well, but we’ll get there.

1966 and all that
Geelong didn’t exactly play 2009 with freedom either, but at least this time some forwards stood up for them – Paul Chapman especially, Mooney got two, and Tom Hawkins drilled a crucial one. This was Ross Lyon’s first St Kilda grand final, and did they blow it.

Robert Walls – that relentlessly positive commentator – remarked that all St Kilda goals that year were from Nick Riewoldt, Justin Koschitzke, Adam Schneider and Stephen Milne. Good luck. Schneider missed an open 15-metre snap in the first quarter. Then St Kilda’s fate was sealed in the second, with Andrew McQualter missing dead in front, then Milne scrubbing his famous kick along the ground before missing a set shot a minute later. Schneider also missed a hard but timely chance in the last quarter.

St Kilda had also won the minor premiership with an elite 22-2 record. The 2009 campaign in spirit was all about the Saints. Riewoldt threw his boots in the corner of his house in dejection and immediately took off overseas. He came back to Australia, saw the boots, and remembered. 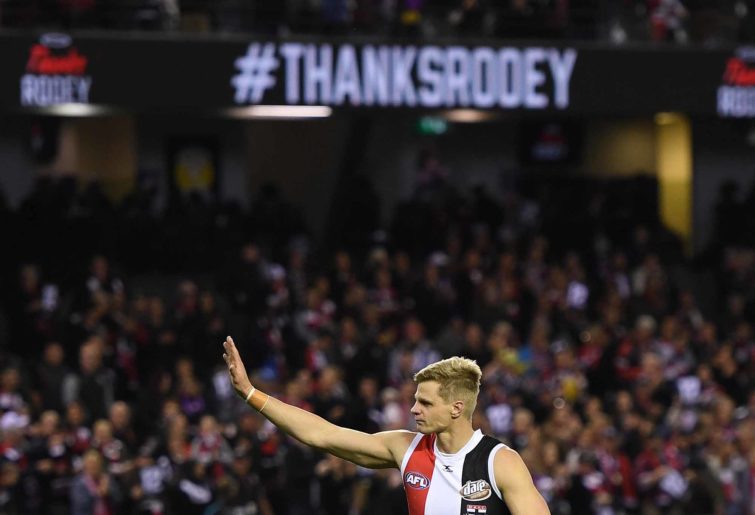 Nick Riewoldt retired without a flag to his name. (AAP Image/Julian Smith)

All was hunky dory for Collingwood until Travis Cloke’s two misses from open goals in the last minute of the half. After that it was a slow realisation for Pies fans that it was one of those days, with open goals fumbled, shots raffled off hurriedly to team-mates instead of calmly converted, just some real Colliwobbles stuff.

The Brendan Goddard speccie seemed to symbolically drive the dagger in, but Mick Malthouse told his troops that night that they had done well to bounce back and re-qualify for a second grand final, and he was absolutely right.

Geelong choked in 2008, got the relief of a razor-thin win in 2009, and had nothing to fear anymore in 2011. As Collingwood choked in 2010, uniquely got the relief of a win also in 2010 a week later, and so had nothing to fear in 2011 either. The two then contested – for sheer quality of play, including conversion –  arguably the highest-quality AFL grand final of all time.

Cometh the moment
Hawthorn have only ever lost six grand finals. It is out of their character to ever doubt themselves, so watching them throw away 2012 on shoddy goal-kicking to the inspirational Sydney – who scored 14.3 in the final three quarters – was stupefying.

The first is always the hardest. After that, “What the hell, it’s only a game,” as Minnesota Twins coach Tom Kelly joked in the middle of extra innings of Game 7 of the 1991 baseball World Series. That was Hawthorn’s clear change of attitude in 2014 and 2015. Grand finals are just games of footy to be won. What’s the big deal?

This gruesome series of consecutive grand final blunders ends with Fremantle’s futile final ten minutes of hard attacking in 2013, and Nat Fyfe and Hayden Ballantyne’s multiple misses. It’s like each team, returning to a new grand final, learned their lesson on a new victim, who had to keep passing the burden onto someone else, and so on to infinity. Except Fremantle didn’t make it back.

This sequence falls down afterwards: the Bulldogs and Tigers put their shots in first time at the plate, and in 2018 Collingwood were the steadier team in front of goal but lost. But thank goodness the sequence ended – I was tired of premierships being won on gimmicks.

We talk about people deserving success, but unfortunately there is mostly no such thing. There is really just taking opportunities or not taking them in this crazy amoral world of ours. Jack Riewoldt’s sensible quoted formula for winning finals in the paper today was as follows: win contests, stick your tackles, take your opportunities.

Said they guy who started his first grand final kicking 0.3. The only way is up.