Since old mate Israel Folau warned gay people and idolaters and thieves and nigh-on all of us that we must repent and acknowledge that we are bad, and if we don’t we’re going to hell forever – no parole, nothin’ – rugby union has known nothing but dud press and lawyers at ten paces.

It’s expensive, it’s stupid and we’ll know soon enough if Israel was sacked by Rugby Australia for practising his religion, as he reckons, or for violating an agreement with an employer.

Regardless, rugby league has dodged a bullet with news that Folau won’t turn out for Tonga after the Rugby League International Federation suspended the board of the Tonga National Rugby League.

Because why would you want Australia’s most famous homophobe in rugby league? 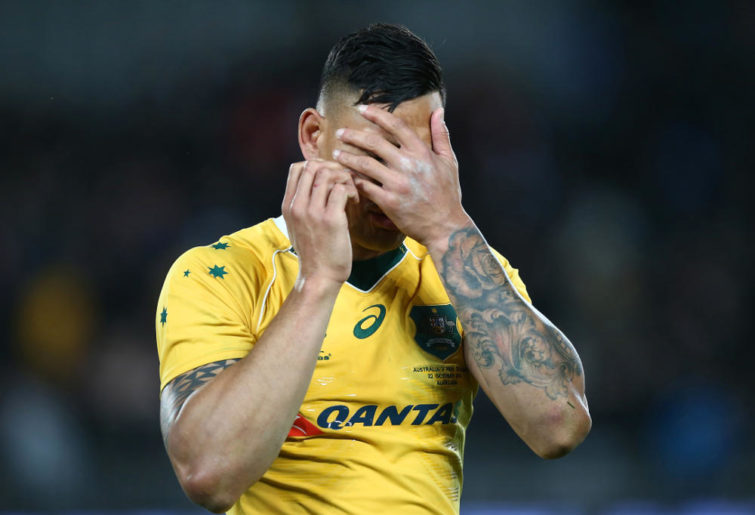 Now, at the risk of sparking up the old free speech and political correctness debate and triggering all the malarkey we had when rugby was (is) dealing with the great palooka, as Jules Winfield said to old mate at the start of Pulp Fiction, allow me to retort.

If Israel had vilified another tranche of society – women, say, or Catholics, Jews, disabled people, Samoans – and never once apologised for it, then he’d have been derided as a fool and a bigot with no place in rugby league.

Imagine if – and this is a bit of a stretch, granted, but try it on as hypothetical – Israel included black people in his list of hellbound peoples. And then he quoted passages in the bible that prove it, as members of some particularly unsavoury groups do.

Is he then just ‘expressing his Christian beliefs’, as Alan Jones and company would assert? Or is he throwing out hate speech under the guise of religious freedom and freedom of expression?

Some turkeys do quote the Bible to illustrate their belief in white dudes’ superiority over black. And they’re pilloried for it and put in jail.

Yet Israel can say that gay people should change? Should repent because being the way God made them is sinful? And rugby league people, good people, would give him a free pass on this stuff? Tell the gays not to worry about it?

It comes down to if you’re sweet with homophobia, which many quiet Australians appear to be. Or at least aren’t that fussed about. It’s not happening to them – what’s the problem?

And you can argue Israel’s dopey meme is pretty light on. And certainly gay blokes I know don’t give two stuffs about Israel’s happy-clappin’ horseshit.

But I do. And Ian Roberts does because this sort of dopey hate-speech is dangerous to young gay people.

Israel says he’s telling gay people out of love that God made them gay and they’re going to hell if they don’t change. From who they are. As they were made in God’s image, apparently.

Young gay people suicide five times the rate of straight kids. And if Israel loves them, he’d shut up.

A lot of Polynesian kids, if not the vast majority, are brought up church-going, God-fearing. There are gay kids among them. If Israel loves them, how about: don’t say they’re going to hell. How about: keep that stuff to one’s self. Be a quiet Australian and vote for ScoMo in silent protest because you don’t like being lectured to.

As for ‘inclusiveness’ – please! Rugby league doesn’t include plenty of people. Ben Barba won’t play again. Todd Carney’s in the bush. Tim Simona rorted a charity and won’t play NRL again, one would assume, unless he’s very, very, very, very sorry and does many good deeds.

The NRL has a float going up Oxford Street at Mardi Gras because it wants to be cool with a section of the community and via them the greater community.

Rugby league wants to get aboard the massive goodwill felt towards gay people at that time of year (a couple weeks to kick-off) because it wants the NRL’s brand to be known as progressive and, well, good.

Israel Folau is not on board.