Opportunities in Oita for the All Blacks against Canada

The All Blacks will play Canada on Wednesday, and few if any observers give Canada – ranked 22nd the world – a chance of winning the match.

But it’s important that the All Blacks approach the match strategically and remain clinical in its execution, and that the players remain focused between now and then, especially with the uncertainty now posed by Pool A.

Japan’s remarkable and well-deserved win over Ireland means that New Zealand may not know which team they will play in the quarter-finals until the result of the final Pool A match between Scotland and Japan is known.

Strategically the All Blacks will take the long game into account – this is one more match on the march towards the knock-out round and the World Cup final. They need to ensure players in the 31-man squad who didn’t feature against South Africa get game time, as well as giving those who played South Africa sufficient rest. After the match with Canada, the team plays Namibia just four days later, then Italy in the final match of the pool six days after that.

In an ideal world, going into the quarter-final, every player in the squad will be in peak condition and there are no injuries.

We can anticipate several changes to the All Blacks’ team.

Ben Smith, Rieko Ioane and Jordie Barrett should be in the starting line-up and expect Jack Goodhue to get some game time. Smith would play at fullback while Beauden Barrett is rested, Ioane on the wing and Barrett either on one wing or possibly in the No.10 jersey.

Ryan Crotty and Sonny Bill Williams should also get some game time. TJ Penerara would start, with Brad Weber off the bench early, assuming Steve Hansen does not play Penerara at No.10. The selectors opted to leave Josh Ioane at home and not bring a third first-five to Japan, so they have obviously considered different options to fill that role in the group games. Richie Mo’unga, too, should be rested. 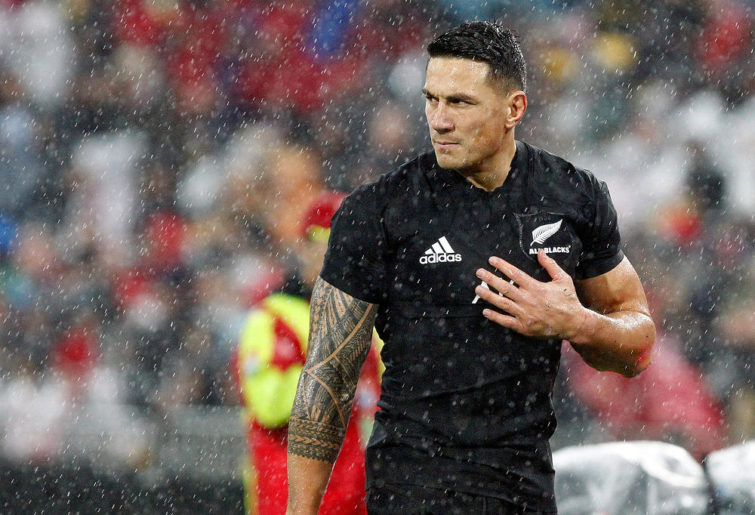 A large number of changes should be made in the forwards, with a new starting front row to the one that successfully matched South Africa. Codie Taylor should get the nod as hooker, with Liam Coltman coming on early from the bench.

Patrick Tuipulotu will likely lock with Scott Barrett, with the possibility of either Brodie Retallick coming off the bench and/or Shannon Frizell if he is not already in the starting XV.

Matt Todd will start the match as well, with Sam Cane possibly coming off the bench. Anticipate Kieran Read as the starting No.8, with Ardie Savea coming on later the game. The mixing and matching will need to continue throughout the pool matches, with a near full strength team facing Italy.

The point here is that the players who did not run out on the field in Yokohama all need to get match time. And remember, too, that this is by no means an All Blacks B team. It is smart use of 31 top players who are there for the entire tournament as a team. Remember also that each player wants to make his mark on the match and is, in a sense, competing for starting positions in the knock-out games.

So expect whatever team it is that plays Canada to be playing with each individual at his clinical best. Expect also that the All Blacks will experiment with some tactics, although still not revealing all the plays the coaches have worked on up their sleeves. 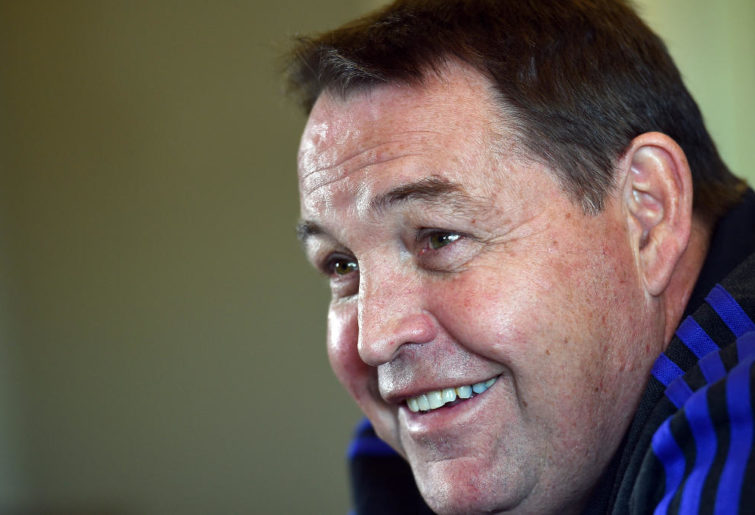 And expect that the Canadian team will not simply roll over.

Canada lost to Italy in Fukuoka a few days ago, although the 48-7 scoreline could have been a lot different. In the first 20 minutes, Canada missed many tackles and dropped the ball often. Italy quickly pushed out to a 17-0.

But the game changed in the next 20 minutes, and it was Canada that occupied Italian territory and came close to scoring. Back-rower Matt Heaton had just come on to the field as a replacement when he dropped the ball a few metres short of the try line with no-one in front of him. It’s become an Instagram meme.

On several other occasions Canada came close to scoring but could not get over the line. Credit to Italy, however, as they played well and at times looked very sharp, with No.7 Jake Polledri seemingly unstoppable all game with his speed and his ability to break through tackles. He was worthy of the man of the match award.

Canada at times looked sharp, too, and were competitive for much of the game. They have quality players, a number of whom – such as DTH van der Merwe, Evan Olmstead, Shane O’Leary, Jake Ilnicki and Ulster fullback Peter Nelson – play in top club teams in Europe and the UK.

Captain Tyler Ardron plays for the Waikato Chiefs in the Super competition, and a large number of the squad play professionally in the newly formed Major League Rugby (MLR) – the North American rugby championship. Seven members of the Canadian squad play for the Toronto Arrows, Canada’s only professional rugby team in that competition.

Canada will come out hard against the All Blacks. Hard, but somewhat weakened as a number of players came off the field against Italy injured and will need some time to recover. The Canadians will also come out with something to prove – determined to show to themselves, to their coach, to the many Canadians in Japan and to the fans at home that they can play much better and for much longer than was seen in Fukuoka against Italy.

Canada had the crowd support in Fukuoka, and by the later stages of the game, played in hot and humid conditions, it felt like the 17,000 in attendance were all Canadians. At the end of the match the Canadian team walked to the end of the field behind the goalposts where school students were seated. A large portion of the children had been waving Canadian flags throughout the game and the team bowed to show its appreciation. A fitting end to a match that had a festive feel to it, made even more memorable with the entertainment outside the stadium as the fans arrived. 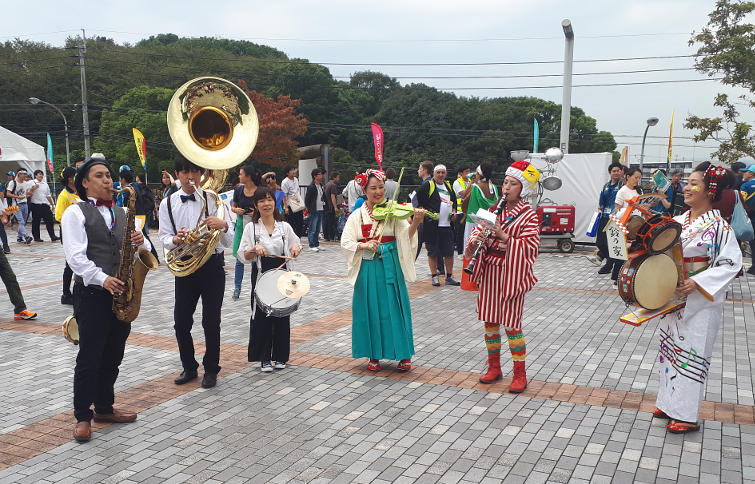 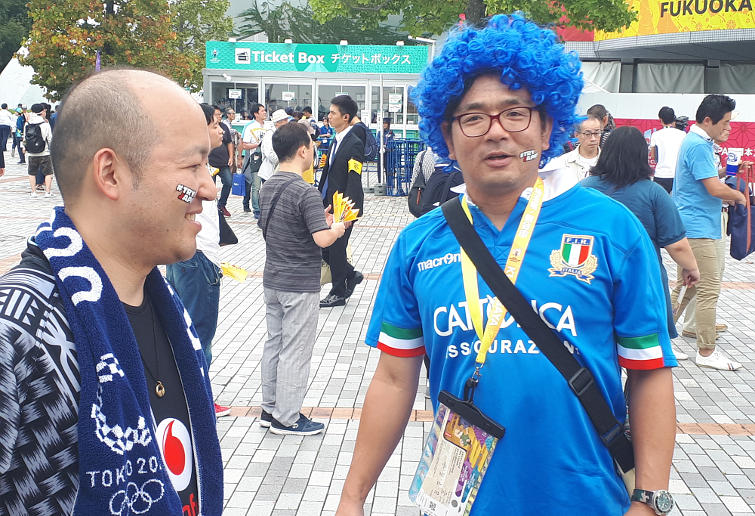 But it’s down to business once more in Oita. Regardless of the All Blacks team that runs out in Oita, it’s likely that they will be the crowd favourite as they are somewhat revered in Japan. But everyone likes an underdog and you can guarantee there will be support for Canada as well. Conditions are expected to be wet and slippery.

Canada will also have a few tricks up their sleeve and will also benefit from the sage advice, All Blacks insight and wisdom of Sir Graham Henry, the former World Cup winning coach who is now an assistant to the Canadian team. Meanwhile, Canada’s coach Kingsley Jones – who was at one time himself coached by Graham Henry – is under no illusions as to the task ahead of the team.

Coupe du Monde de Rugby 2023. Pool A: Australie vs Nouvelle-Zélande au Stade de Toulouse. Saturday morning, 17 September, Hotel d’Orsay. We had our coffee and croissants in the dining room, and while the others were upstairs getting their gear I was chatting with Robert, the concierge. We called him Uncle Bob as in ‘Bob’s […]

Everyone has been talking about a merged Anzac Super competition next year.

Earlier this week I wrote an article about the possibilities for Australian rugby in a solo post-COVID-19 world.

New Zealand Rugby is coming under increasing fire from its Sanzaar partners over the unilateral move to set up a new franchise competition, with legal action even being mooted by South Africa.

New Zealand Rugby is confident it will get buy-in from Australia to join its new-look franchise competition in 2021 but says it will be highly selective over which teams will be invited to take part.