Having had six days to get over the narrow loss to Wales in Tokyo the Wallabies clash with Uruguay was all about building momentum for the quarter-finals.

The 45-10 win in Oita moves Australia back to top spot in Pool D for now. Here are my talking points from match.

Jordan Petaia
In a fairly uninspiring first half the one positive for the Wallabies was teenage Jordan Petaia making his debut for Australia.

The 19-year-old looks to be one of the best hold runners in the game and had been due to make his first appearance against Italy in November, before injury intervened.

Today was his day as he stood arm in arm with cousin Matt To’omua at the anthems.

It took just 24 minutes for Petaia to raise the roof as he cut in from the left wing to find a gap and spin over the line for a moment he will never forget.

The winger from Brisbane capped off an outstanding first-half by using his athleticism, awareness and timing of pass to set up the Wallabies third try.

Petaia was replaced at half-time by Adam Ashley Cooper. Perhaps Michael Cheika had seen enough and he’s in for the next match? 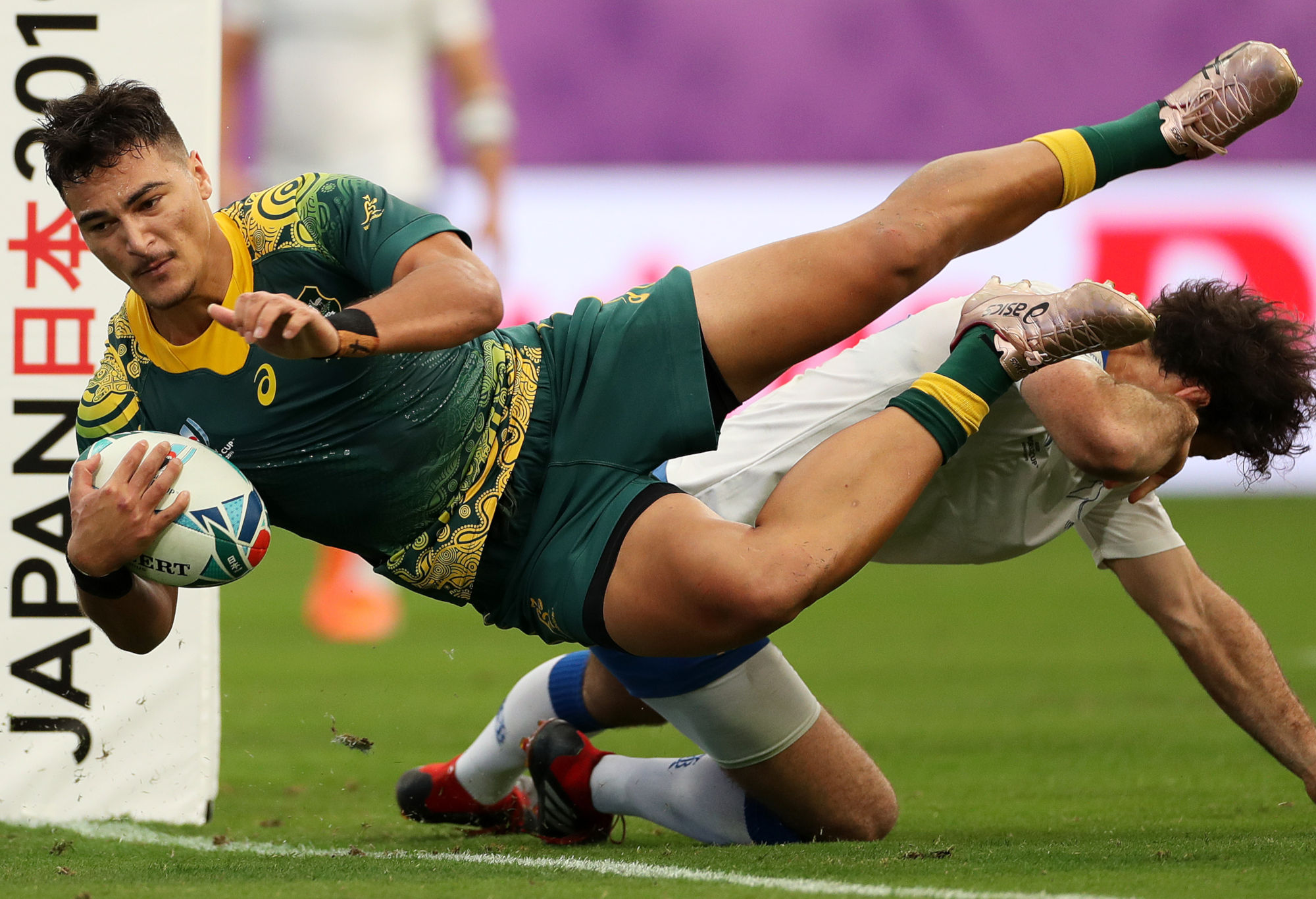 Wallabies slow starters
Michael Cheika made 12 changes to the team with a chance to give all players in the 31 some game time.

This may have hampered Australia’s flow but their insipid first-half display was not one of potential World Cup winners.

Basic skills were well off particularly their tackling technique which resulted in two first-half yellow cards and nine penalties against.

Despite having much of the play, the forwards were careless in possession and struggled to assert their dominance.

After the break the Wallabies looked far more in control as they did against Wales and Fiji. The tidying up at breakdowns was much improved which allowed them to pull away from the tiring Uruguayans. Jack Dempsey’s power and hard running was notably impressive in the latter stages.

When Australia put phases together they are one of the best in the world but they must be on it from the get go. Mistakes were made but they can be fixed.

Overall it was an average performance with plenty of room for improvement.

The Uruguayans
The result was never in doubt, but all the same, Uruguay are still a great story. With a population of just 3.3 million and just 4,000 registered players it is some achievement that Uruguay are playing in their fourth Rugby World Cup.

Los Teros are certainly improving every time as their players gain more experience in professional competitions around the globe.

The 18th placed team in the world rankings have won seven of their tier two Tests in 2019.

Uruguay pulled off the first major shock of this World Cup too when they beat fiji 32-27. The fact that their coach Esteban Meneses believed that his team could push Australia all the way in this one is a good example of how far they have come.

Ultimately they lacked a clinical edge and were simply out-muscled.

Uruguay were industrious in the opening 40 and had Inciarte’s try disallowed.

But a great moment for the Uruguay fans did arrive in the closing minutes. After 18 phases of play their best player on the day, Diana, finally forced a consolation try. Their players were almost too exhausted to celebrate.

James Slipper
The Aussies celebrated like they were through to the final after James Slipper in his 94th Test finally scored his first international try, diving over from the scrum from three metres out.

The experienced prop is off the mark for his country and received a standing ovation from the bench as he came off. 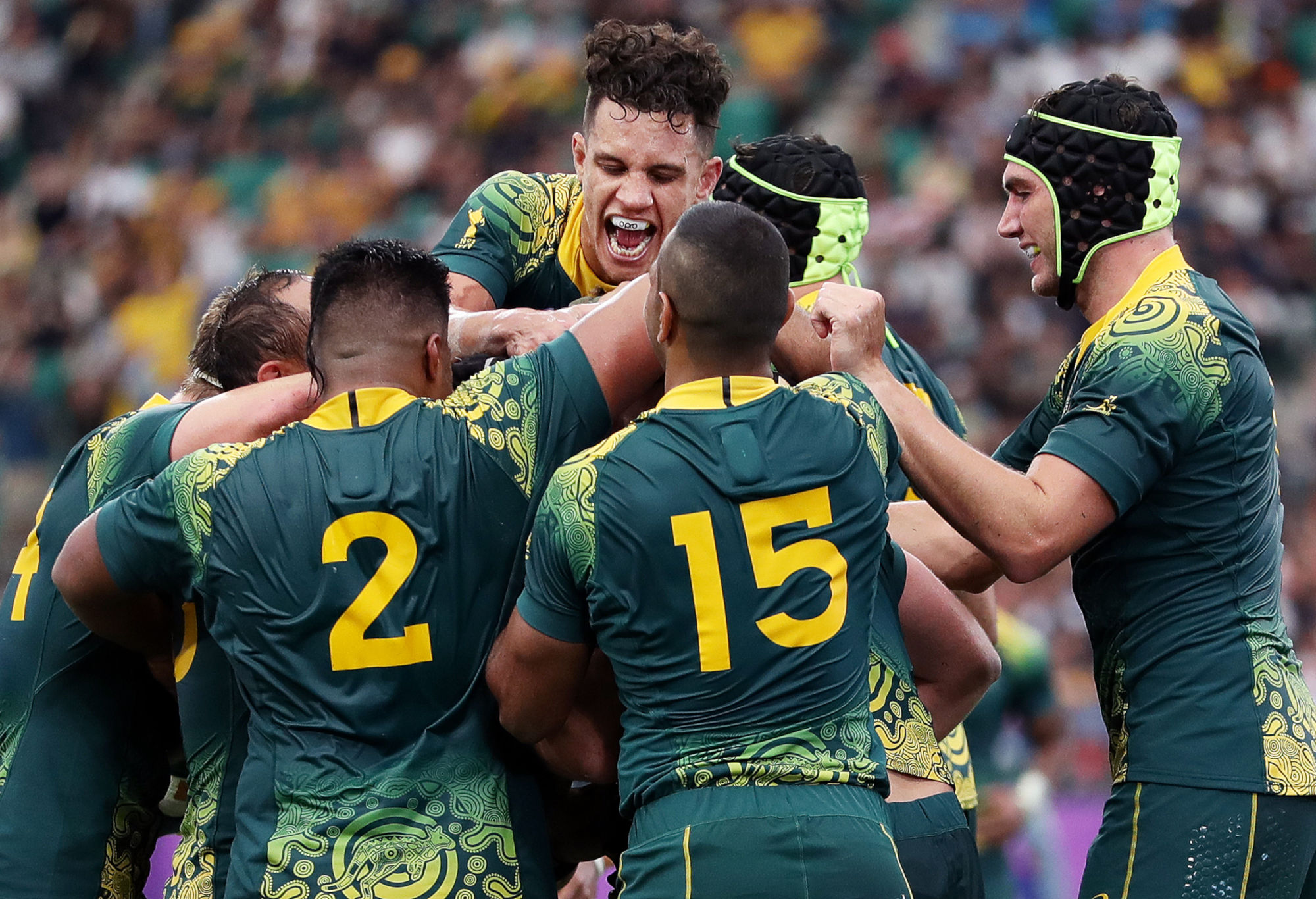 Indigenous shirts
Australia wore their indigenous-inspired shirt for the first time at a Rugby World Cup. The design, by artist Dennis Golding, had previously only been seen in a defeat against England in 2018 and a victory over the All Blacks in 2017.

In the build-up to the match Kurtley Beale gave his assessment on the green away jersey.

“As a proud indigenous Australian I am very excited to be wearing the indigenous Wallabies playing strip,” he said.

“We have got all the buy-in from the players and the staff and as a country it is a true representation and acknowledgement of the First Nations people. It’s going to be a very special night for all involved, I can’t wait.

“It’s definitely a symbol that we are all behind. It is galvanising us, bringing us together.”

It’s safe to say the shirt is a big hit with the players and fans.