The Wrap: Japan’s Blossoms do rugby and their people proud

Sometimes you just get lucky.

Lucky enough that a Typhoon which renders people in its path dead, missing, injured and homeless passes through so swiftly that a city battered, drenched and shut down on one day, is restored enough the next, to host a rugby match.

Lucky enough that when putting my World Cup schedule together months ago, I singled out the pool A Japan versus Scotland match as a ‘don’t miss, winner takes all’ showdown for a quarter-final spot.

And lucky enough that, along with 67,665 others inside Yokohama stadium, I was there to witness one of rugby’s greatest nights.

Playing sport in the wake of a natural or human disaster is always a tricky proposition, but due respect was paid to those affected by the players and crowd before the match, and by both coaches immediately afterwards.

In between, to the delight of everyone not wearing a kilt (although I suspect even some of them), the Japanese players showed their respect in the best way imaginable, their 28-21 victory securing their unbeaten sweep through the pool, and an historic, first ever World Cup quarter-final.

A win by any means would have been enough for home fans. But it was the manner of the win; the speed of ball movement, the sharp tactical edge and the infectious enthusiasm and commitment to repeatedly drive their opponent back in defence, that truly captured the hearts and minds.

The Scots may have lost with dignity, but the Japanese, playing some of the best rugby seen in the tournament, won with unmitigated honour.

The tone was set right from the opening whistle, a sneaky grubbered kick-off sending a message that it was the hosts who would dictate the running.

There was an early hiccup when Finn Russell found a small seam in the Japanese defence to open the scoring after six minutes, but with the noise and intensity off the charts, Japan never flinched, taking control of the remainder of the first half in every aspect of the game.

The tries duly came, Scotland seemingly powerless to slow the pace and stem the tide. In the 18th minute a great inside ball from Kenki Fukoaka sent Kotaro Matsushima on a clear run to the line, and in the 25th, more offloading and backing up, created a great try under the posts to Keita Inagaki. 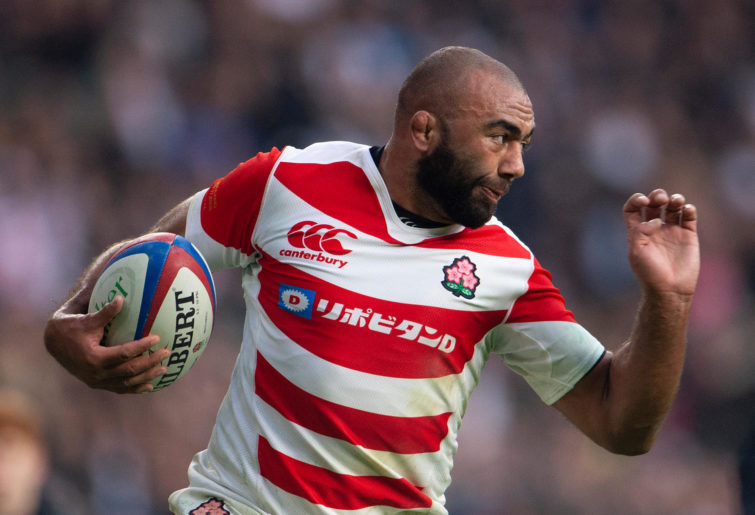 Japan was winning the set piece battle too – the roar which greeted a scrum penalty louder than for their tries – a sure sign that the well-educated fans knew that they were in on something special.

14-7 and still the Japanese came in waves, flyhalf Yu Tamura a shadow of his tentative, kick-happy self from opening night, distributing left and right to a selection of willing runners, forwards and backs.

Another score was inevitable and on the stroke of halftime it happened; Japan again stressing Scotland’s right side defence, Fukoaka running on to a perfectly weighted grubber to pull the ball in one handed to finish off a half of almost complete Japan domination.

Despite Scotland effectively being in deficit by 22 points at half-time, there was an air of caution, fans unwilling to tempt fate. But when Japan started the second half with even greater intensity, and Fukuoka brilliantly stripped and regathered to scoot away for his second try, there wasn’t a non-believer – kilted or un-kilted – left in the house.

Scotland’s comeback gained traction in the 49th minute, WP Nel burrowing over after a sustained build up, before replacement prop Zander Ferguson found himself on the end of a Jonny Gray offload six minutes later. 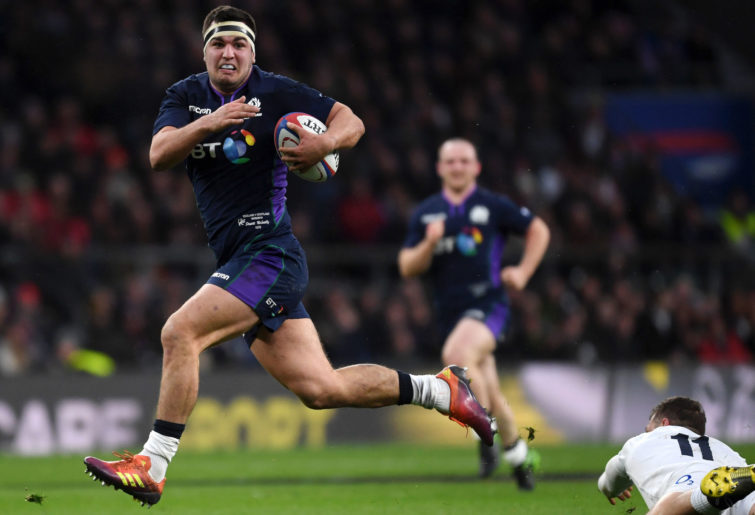 But Japan had the better bench too – Fumuaki Tanaka sharp and industrious, and the ‘human lighthouse’, Isileli Nakajima, simply outstanding.

In the 64th minute Scotland broke from their own line but Chris Harris, now shifted to the wing, elected to chip the fullback when a regulation draw and pass would have sent a teammate under the posts for the tying score. Matsushima covered back spectacularly and a vital chance for Scotland was lost.

Into the final quarter, and it was Scotland now, dominating possession. But while cracks in the Japanese defence widened, they never split apart.

There would in fact be no scoring beyond the 55th minute – not for lack of intent, but because the furious pace of the match had drained the sharpness from both attacks.

It was here that the heartbeat of this Japanese side was most pronounced – coach Jamie Joseph explaining afterwards how, for him, attack was as much about how his side approached the game without the ball as it was with. It was this same commitment to winning the collision and the breakdown that so conclusively shut out Ireland a fortnight before, that also shut the door on Scotland’s World Cup here.

At the final whistle players from both sides sank to the turf, equally emotionally and physically spent, but all of them quick to realise where the spoils of victory lay.

In the background, referee Ben O’Keeffe enjoyed a moment of quiet satisfaction; congratulated by his assistants, well satisfied that in a World Cup awash with criticism for over-zealous and inconsistent officiating, he had made a significant, positive contribution.

If there can be such a thing as a ‘team selfie’, a snap in front of the adoring crowd was spontaneous, brilliant and perfectly understandable. As it will be understandable if there are Japanese players whose feet are still not touching the ground by Wednesday. 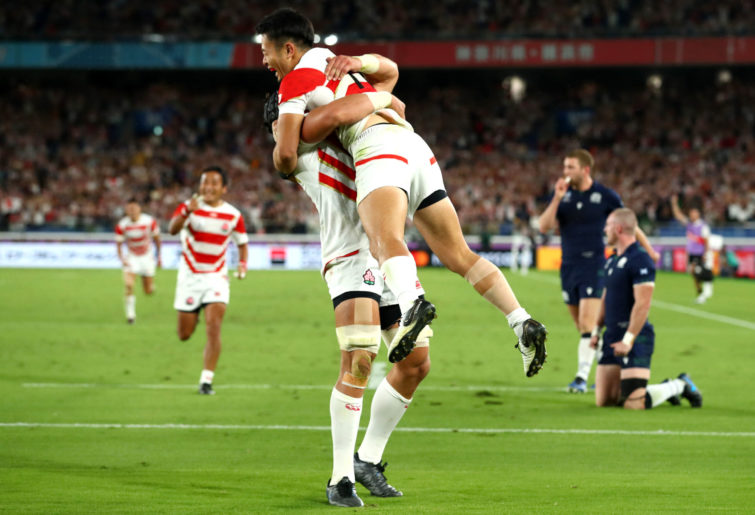 But Rassie Erasmus is already well down the path with South Africa’s preparation, and with a debt to be settled from 2015, the sooner Japan start steeling themselves for their quarter-final the better. Nothing will ever detract from this achievement, but every team that plays in a World Cup quarter-final – first time or not – must do so believing that they are good enough to also play in, and win, a semi-final and then a final.

That captain Michael Leitch said in the press conference, ‘I’m not too sure who we’ve got next’, only reinforces this point. History will judge this team by what they achieved on Sunday night, but if you want to be accepted as one of the big players – as everyone dearly wants Japan to be – then it’s what you do the following Monday morning that counts.

Encouragingly, coach Joseph was in no doubt about who his next opponent was, and both he and Leitch offered nice insights about what it was like for him and his team to be “treated like royalty” around Japan, and how grateful they were for the opportunity to inspire the Japanese people at such an acute time.

The local media are certainly on board; Joseph and Leitch entering the press conference to a hearty round of applause, something I’ve yet to see happen with Michael Cheika.

For his part, Scottish coach Gregor Townsend didn’t want to be drawn into discussion around uncertainty about the match going ahead having an impact on Scotland’s preparation, insisting that, “we prepared as if we always expected the game to go ahead.”

At least his players, for their brave second half effort, could hold their heads high. Higher than their bosses, whose unseemly rush to accuse World Rugby of unfairly favouring other nations and to threaten legal action should the match not proceed, was exposed as premature and grossly insensitive.

No disrespect is meant to the departing nations in recognising that the real battle for the World Cup begins in Oita on Saturday.

Of the quarter-finalists, England have a class and coaching edge, but may find that they are a hard match shy in their preparation. Australia’s set piece is good enough, but their consistency and discipline may not be.

New Zealand are in the strange position of having beaten South Africa to avoid playing Ireland, and now finding themselves doing just that.

Ireland’s bookends, Cian Healy and Tadhg Furlong have suffered in Japan’s steam-bath conditions but, as I write, Tokyo’s temperature sits at a friendly 17 degrees, a mere tick above today’s forecast high of 14 in Dublin.

Wales’ loose forwards and halfback are on song but they wouldn’t want to be testing their squad depth. France’s players are being encouraged to mutiny against their coach – which guarantees they will either be abject or sublime. Or both.

Losers on the first weekend, South Africa have had the cards fall their way. But outside of the electric Cheslin Kolbe, do they have enough avenues to the try line?

Which leaves Japan to close the circle of eight. They no longer have the element of surprise in their corner, but they have a tidal wave of momentum and self-belief, and the type of high-speed game that appeals as perfect for the conditions.

Tens of thousands of travelling fans have already enjoyed a splendid World Cup, on-field and off. Many thousands more will arrive in tour groups this week, in time to join the party and experience the quarter-finals and beyond.

Sometimes you just get lucky.