Three months after the first ball of the World Test Championship was bowled at Edgbaston, Bangladesh are set to play their first Test in the competition as they face neighbours India.

There have been many distractions leading up to this series.

On the 21st of October. Bangladesh players started a strike against Bangladesh Cricket Board (BCB) over the lack of proper administration regarding domestic cricket in Bangladesh. The strike was led by Shakib Al Hasan, laying out 11 points to be followed before the players would resume cricketing activities

On October 22, BCB president Nazmul Hasan lashed out at players. He called the strike a conspiracy created to bring the BCB down. To make things worse, Hasan attacked the players personally over favours he has done in their lives in the press conference.

On October 23, Shakib calls off the strike after the board agrees to their 11-point list of demands.

On October 29, Shakib Al Hasan was then banned for two years (12-months suspension period) for failing to report corrupt approaches in January and April 2018. The suspension of Shakib led to Mahmudullah becoming the T20 captain and Mominul Haque leading the Test side.

The Tigers faced India in a three-match T20 series and fought valiantly for a 2-1 series loss. But this is a completely different ball game compared to the T20 format.

India at home in Tests is like Liverpool at Anfield. It is an absolute fortress and India under the leadership of Virat Kohli in Tests is ruthless, especially at home. This ruthlessness has led to India losing only one Test at home since December 2012.

The conception of rank turners on Indian pitches needs to go away. Their side is good enough to play on seam-friendly pitches and showed that against South Africa, defeating them on good pitches and green tops as they romped to a 3-0 win.

India now have a very stable line-up with Rohit Sharma coming into the side as an opener and smashing three tons in five innings, taking the pressure off fellow opener Mayank Agarwal.

The rest of their side are stacked with world-class players. There is no weak link in this Indian Test side, especially at home.

Bangladesh are starting from scratch once again in Tests as Mominul Haque leads this team. With Tamim Iqbal out of the side for personal reasons, Imrul Kayes replaces him in the Test team. Kayes plays spin wonderfully but his footwork against pace bowlers is very weak and the likes of Mohammad Shami, Ishant Sharma and Umesh Yadav will look to exploit that with the new ball.

The 20-year-old Saif Hassan gets rewarded for his performances in the first-class arena and Bangladesh A with a maiden call up while Al Amin Hossain replaces Khaled Ahmed from the squad that toured New Zealand.

It is a bit baffling to not see Soumya Sarkar in the Test squad. After scoring 149 in Hamilton, the left-hander has played only two more Test matches while batting in three different spots, giving him no chance to cement a spot. 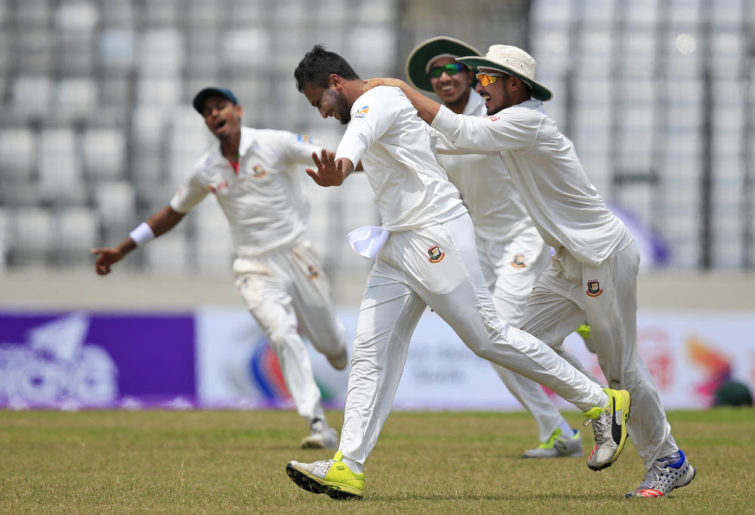 Shows once again the knee-jerk reactions by the Bangladesh selectors after a loss. If there’s anyone who can genuinely cause any threat with the ball for Bangladesh, it’ll be Abu Jayed.

Dubbed the Bengali James Anderson, Jayed has the knack of forcing the batsman to play nearly all the time with his outswingers and can be very deadly with the new ball. Another bowler who can cause problems will be left-arm spinner Taijul who can bowl long spells and Test the batsman’s patience with his accuracy.

Bangladesh will have gained confidence from the way they played in the T20 series. But the Test series will be very hard and I’m expecting nothing less than India winning the first Test and claiming 60 points.

With no Shakib and Tamim, taking the match to day five and possibly the last session will be a morale booster for this inexperienced side.