As the 2016 season drew to a close Richmond fans had had enough. T

he club had been through some dark times since their last premiership in 1980, with the club only winning three finals in 36 years and many fans calling for coach Damian Hardwick to be sacked after finishing 13th to close out his seventh season in charge. After all that time Hardwick had managed three finals tilts, but it was because of no finals wins that fans had lost patience.

The Richmond board decided to give Hardwick one more crack to prove he was the right man for the job, a decision Richmond will be forever thankful of making. Two premierships in three years and a preliminary final has Richmond being a powerhouse once again in the AFL.

They clearly had talent on their list as they were good enough to finish fifth in 2013 and 2015, but couldn’t go on and win any finals. So just how did they put together a list that has been so dominant over the past three seasons?

Across both premierships they have 16 players as two-time premiership winners, meaning there were six changes from the first flag.

Out of the 28 premiership players 11 of them were taken in the first or second round of the draft by Richmond. Another five were acquired via trade, 12 were value picks late in the regular, preseason, rookie or midseason drafts and of course there was one free agent signing that the club made.

The draft has always been viewed as the best way to approach a rebuild and it is fair to say that’s what Richmond did – in 2009 then coach Terry Wallace only lasted until Round 11 before getting sacked and commencing their plan. They earned pick three in the 2009 draft after finishing 15th which landed them a kid by the name of Dustin Martin – perhaps the biggest part of all of this success.

In 2009 the Tigers had established players in Jack Riewoldt, Shane Edwards, Trent Cotchin and Alex Rance who have now all played over 200 games, featured in multiple All Australians and collectively won a Brownlow, three Coleman Medals and a couple of premierships. Conveniently Riewoldt and Edwards were their first two picks in the 2006 draft and then Cotchin and Rance were the first two picked in 2007 – a massive tick to the Richmond recruiting team for these picks.

Across the drafts between 2010-2012 they brought in Bachar Houli, Brandon Ellis, Nick Vlastuin and Kamdyn McIntosh – all have now played over 140 games apart from McIntosh who has played 90. Suddenly the groundwork was done for the side to be competitive, and this helped propel Richmond to their first finals series since 2001 when they finished fifth in 2013 – but unfortunately lost the first elimination final to Carlton.

The 2014 draft for Richmond produced five premiership players, but strangely enough four of them were from the Rookie Draft and the other was Dan Butler who went with pick 67 in the National Draft. The other four players were Jayden Short, Jason Castagna, Kane Lambert and Ivan Soldo – another big tick for the Richmond recruitment team to get such value from their rookie selections.

Across 2015 and 2016 the Tigers added Daniel Rioli, Nathan Broad, Shai Bolton and Jack Graham. By now Richmond were littered with young talent who have enough games under their belt to be competitive at senior level.

Across these years of hitting the draft quite heavily they had quietly picked up a few assets via trade. They traded for Shaun Grigg in 2010 – which turned out to be one of the biggest steals in trade history – and in 2016 they traded a third round pick for Toby Nankervis who had been starved of opportunity at his previous club.

After the horror show that was the 2016 season Richmond went out and traded for Dion Prestia and Josh Caddy, which raised a lot of eyebrows back then with the thought that these two wouldn’t fix the problems at Punt Road. Prestia had shown plenty at Gold Coast but the fact that Richmond parted ways with their pick six in the deal to land him is what had fans questioning the trade. Fast forward 12 months and nobody is questioning either of them again.

The playing list was there and internally the club was confident they were ready for success – off the field the membership numbers had risen to 75,000 members for the 2017 season. After five weeks the Tigers were 5-0 and their dynasty had begun. They won the flag in 2017, their members grew to 100,000 and all of a sudden everybody had forgotten that 12 months ago Damian Hardwick was a legitimate chance to be out of the job at Punt Road. 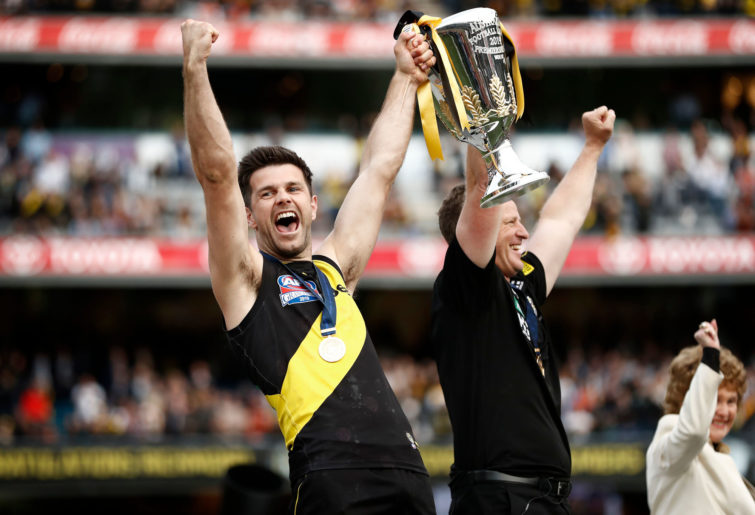 The 2018 season was a breeze for Richmond where they finished on top of the ladder and seemed certain to go back to back until their inexcusable performance in the preliminary final against Collingwood – despite being red hot favourites they were beaten comprehensively by 39 points. It was widely regarded as one of the biggest upsets in finals history and a complete waste of a dominant season for the Tigers.

In the off season Richmond made perhaps the biggest free agent signing since the practice entered the AFL when they landed then Gold Coast skipper Tom Lynch. Suddenly Richmond’s list got a whole lot better and despite plenty of injuries to key players throughout 2019 they managed to finish third. Fast forward a month and Richmond belt GWS by 89 points in the Grand final to win their second flag in three years – which could have easily been three out of three.

The four key moments leading up these three years of dominance has to be pointed towards the 2006 and 2007 AFL Draft, landing Dustin Martin in 2009, signing Tom Lynch after the 2018 preliminary final loss and keeping Damian Hardwick as the coach after the 2016 season.

With the current list still going strong there is no reason they can’t win it all again in 2020. They’ve added even more young talent that are sitting around that 50 game mark and the veterans hanging around still have a few more years left in them – not to mention they’ll add five-time All Australian Alex Rance back into the side after missing basically all of 2019 with an ACL injury.

The Tiger army is just warming up and they will be contending flags for a few more years yet.