Cricketing lessons from the summer of 1985-86

Some readers were kind enough to write how much they enjoyed my previous piece on the 1984-85 Australian cricketing summer.

So as a show of thanks – or a form of group therapy, I’m not sure – I thought I’d traumatise you some more by taking another trip down memory lane and discuss an equally horrid season: 1985-86.

It was a summer during which the performance of the men’s team was so bad the Sydney Morning Herald released a headline calling us “The worst team in the world”.

I say “us” fully aware I was engaged only as a fan, not as a player, but that’s how the hardcore feel when their team plays – it’s “we” and “us” – so please excuse the appellation.

Were we that bad? No. Not the worst in the world. We would’ve beaten the Sri Lankans. Probably.

But we were pretty bad. This wasn’t losing to the West Indies or overseas. We lost to New Zealand – our annoying little sibling across the Tasman – at home 2-1 and in New Zealand 1-0. And the New Zealanders didn’t just win those Tests, they thrashed us. We could handle that when it came to rugby, mountain climbing or social reform, but not cricket. We’re the ones who are meant to be good at cricket.

We drew with India 0-0, but it was only rain, Alan Border and dodgy umpiring decisions that stopped us from losing 2-0. We never came close to winning any of the games.

On the sunny side we did win the Australian Tri-series tournament. Border batted marvellously. Several young Test players came of age, including Greg Matthews, Bruce Reid, David Boon and Geoff Marsh. A lot more players came through at Shield level, like Mark Taylor, Mark Waugh, Merv Hughes and Dean Jones, who would pay off down the track.

So it was a darkest-before-the-dawn kind of summer.

But that summer itself? It was still pretty dark.

In fact it was so dark the nation was swept up in mania over Greg Matthews, one of the few players to impress. Said mania resulted in a Greg Matthews biography being released in 1986 (I still have my copy), by which stage Matthews was headed out the door of the national side, but that’s another story for another day.

The only constants for the Australian team that summer were Alan Border and Greg Matthew. Let that sink in for a moment.

There were mitigating circumstances for Australia’s poor performance. Sixteen players were banned because they had gone to South Africa. This was particularly devastating to our fast bowling ranks.

To make things worse, during the summer we lost our two main strike bowlers, Craig McDermott and Geoff Lawson, to injury, and one of our best batsmen, Kepler Wessels, to retirement after he clashed with the Australian Cricket Board over the rebel tours.

This did enable Wessels to play more Sheffield Shield cricket for Queensland, who proved unable to defeat New South Wales in the final for the second year in a row. For Queenslanders the whole of the 1980s is full of traumatic Sheffield Shield memories but, again, that’s another story for another therapy session.

In hindsight, what did we do wrong? What did we do right? Did the summer have to be as bad as it was? Are there any lessons to be learnt to give this piece some relevance other than as a nostalgia exercise?

First up, I think Australia were always going to struggle in 1985-86. Sixteen players is a lot to lose. And that Kiwi team was really strong – among their best ever. You have Richard Hadlee at his peak, the Crowe brothers, the opening combo of Bruce Edgar and John Wright, the captaincy and batting of Jeremy Coney and batsman John Reid, who no-one remembers was actually fantastic. Plus there were all those medium pacers.

The Indian team was less good – it suffered the curse of all Indians teams from the 1980s until just recently: a lack of penetrative bowlers – but still included players like Kapil Dev and Sunil Gavaskar.

I think the selectors did a lot of positive things that summer. David Boon, Geoff Marsh and Bruce Reid established themselves. Robbie Kerr, Dave Gilbert and David Hookes didn’t work out in the long run but deserved their shots.

We could have done better than we did, though, and there are lessons that can be learnt for today.

1. Pick a proper keeper
Poor Wayne Phillips. Such a brilliant batsman when on song. An okay backup keeper, he was thrust into the job full time in 1984, and his fighting efforts with the bat kept leading people to make excuses for his form with the gloves. He had his moments behind the stumps, but wicketkeepers really need to get it right 98 per cent of the time. Phillips didn’t, especially against the spinners.

The selectors should have figured this out before the summer started. It became a talking point as the season went on. Even Prime Minister Bob Hawke spoke out in favour of a specialist keeper. Tim Zoehrer was brought in for the New Zealand tour, launching his erratic career. But there were other options too, notably Queensland’s Ray Phillips. The Wayne-Phillips experiment should never have lasted as long as it did.

2. Pick bowlers who can win you games
Australia started the summer with three bowlers who could win them games: Lawson, McDermott and Bob Holland. Lawson and McDermott suffered injury, though the former’s absence was compensated slightly by the emergence of Bruce Reid.

McDermott’s form was erratic. He had been picked for national honours very, very young and only really got his act together five years later, but it was silly to drop him for David Gilbert, as happened throughout the summer. Gilbert was a fine bowler but could not win matches like McDermott.

Holland was available the whole summer but was dropped for two Tests against India and not taken to New Zealand. This despite him taking 48 first-class wickets at 32.39, making him easily the leading slow bowler in the country.

True, Holland took stick in some games, especially against the Indians, and he wasn’t as effective away from the SCG. But he was a matchwinner – he’d taken five wickets at Lord’s – and a much better spinner than Ray Bright, who took his place against India and in New Zealand. Bright did bring other stuff to the table, like captaincy experience – Alan Border was suffering in that department – and better fielding and batting skills, but we needed to be picking our best attack, and that included Holland.

They also could have been more open to selecting three spinners. The South Africans took the cream of Australian fast bowlers – Carl Rackemann, Terry Alderman, Rod McCurdy, Rodney Hogg – but not our spinners. We still had Holland, Matthews, Murray Bennett – an excellent bowler who was overlooked that summer – and Bright. Historically Australia has regarded picking three spinners as unmanly. But if they win you games, who cares?

A note: Australia played some wonderful ODI cricket that summer, in part because they had a first-rate attack, their X factor being the little-remembered Simon Davis.

3. Pick a balanced side
The Australian selectors knew their bowling was weak and kept trying to compensate by playing four bowling specialists and an all-rounder (Matthews), banking on Wayne Phillips’s skill with the blade to prop up the batting. Sometimes you can get away with that, but it generally is an iffy idea. As was proved in 1985-86.

When Australia played four specialist bowlers and Matthews in the first and third Tests against New Zealand they lost badly. When they played three bowlers and two all-rounders – Matthews and O’Donnell – they won.

In all the India Tests, which Australia never came close to winning, they used four specialist bowlers. In the first Test they had one all-rounder and in the second and third they had two (Steve Waugh), so only four specialist batsmen. We were lucky not to lose both games.

Australia’s team was a lot better balanced in New Zealand, with five batsmen, three bowlers and Waugh and Matthews as all-rounders. We still lost that series 1-0, but the team didn’t feel lopsided. That was the combination used during the tail end of the ODI matches and on the successful tour of India in 1986. If Holland had toured New Zealand, where he took 31 wickets playing for Wellington in 1987-88, instead of Bright, who knows?

Greg Matthews and Steve Waugh didn’t exactly balance each other out either given both were batting all-rounders. In hindsight, Australia would have been better off playing Matthews at No. 6 and someone like Ken MacLeay at No. 8 given he averaged around 27 with the bat and took 35 wickets that summer at 26.08. Trigger warning: I’m still not convinced it was the right idea to rush Steve Waugh into the team as early as they did. Like McDermott, it took him years to figure out his game, and it might’ve been more efficient if he’d done that domestically. 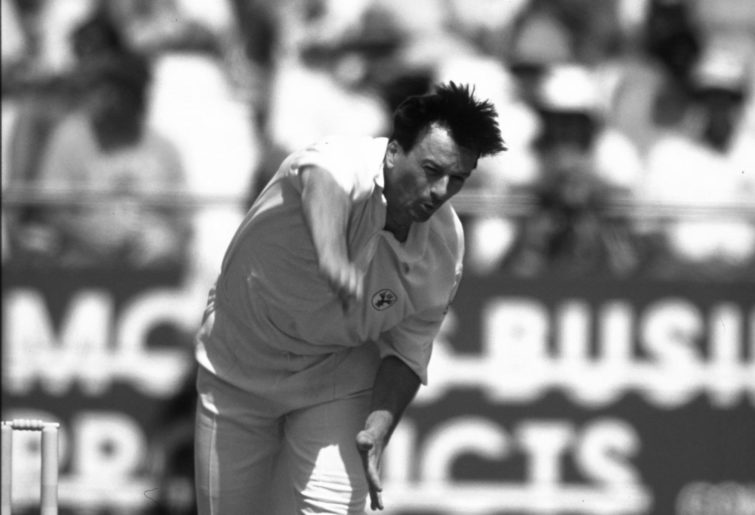 4. Try for some stability
Australia’s selection policy seemed to have a desperate ‘bingo’ feel about it that summer.

And so on. The line up changed every Test. Surely they couldn’t have done worse with – what’s that word? Stability?

Anyway, we got through that summer. Bob Simpson came in as coach, giving Border the support he badly needed. We went to India and tied a Test, then lost the Ashes at home in 1986-87, after which we won the World Cup and the tide did turn.

In part this was because the South African tourists became available for selection again, but part of it was because we learnt from our mistakes. We picked specialist keepers. Zoehrer didn’t work out in the long run, nor did Greg Dyer, but they kept the faith struck gold with Ian Healy. They picked bowlers who could win. They picked a balanced side. They went for stability.

There’s nothing wrong with making mistakes – everyone does – but the trick is learning from them. And throughout the 1980s the powers that be in Australian cricket learnt not to repeat their mistakes. I wonder if they still have that ability today.

It was a weird season, 1985-86. New Zealand cricket fans must look back on it with a great deal of pride, Indian fans with considerable frustration.

It was a summer full of enigmas. Why did Matthews really have only that one great summer? He went on to have many outstanding moments but was never as consistent. Could Wayne Phillips have re-established himself as a specialist bat? Was Waugh picked too early? Was Hookes discarded too soon? Why did Glen Trimble take 29 first-class wickets with the ball and only one more?

Maybe that’s why, despite all the pain I went through watching it as a cricket fan, I am still drawn to this season.

Any old cricket fan can get wistful about great triumphs like the 2013-14 Ashes or the Taylor-Waugh years, but only the hardcore Aussies obsess about 1985-86.

We should not forget it.