That opinion would have been hard to argue with, but this week the 30-year-old Rance announced his retirement from AFL football to concentrate on his family and his religion as a Jehovah’s Witness.

How good was Rance? The answer is brilliant, as his regular All Australian selection (including one year as captain) testifies.

His father Murray played for the Western Bulldogs and West Coast and captained the Eagles.

Alex Rance was recruited by Richmond in 2007 at number 18 in the draft – the same number that he wore with distinction in his 200 games for the Tigers.

Rance became the 30th player to play 200 games for Richmond and shares equal 29th position on the Richmond top 100 game-players list with star forward Michael Roach, who played against Alex’s father Murray in the 1980s. 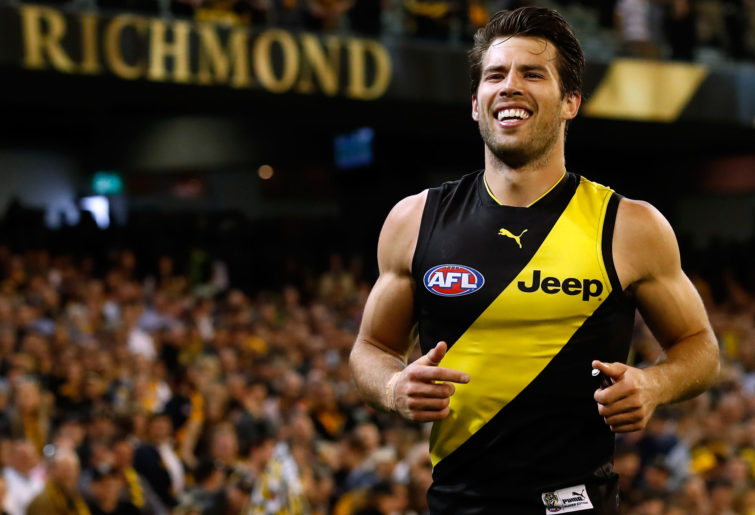 In fact, the similarities between Alex Rance and Michael Roach are uncanny. As well as playing the same number of games for the Tigers, they shared the same birth date (October 9), albeit 31 years apart.

Only separated by one centimetre in height and two kilograms in weight, both were Tigers favourites in their heyday with good looks and a demeanour of quiet efficiency.

Both were All Australian players and members of a Richmond premiership win, but there the similarities end.

Rance, a winner of Richmond’s best and fairest the Jack Dyer Medal in 2015, was also runner-up on two occasions and regularly finished in the top ten.

Roach, although winning the Coleman Medal – the leading goal-kicker award – on two occasions and at one stage being considered the best full forward in the league, failed to feature in the Tigers’ best and fairest.

Of course, the other striking contrast between the two champions is the number of goals scored.

Over his 200 games, Rance scored only nine goals, six of which came in the one season of his 11-year AFL career (2010). In that year, he achieved his only two multi-goal games with three against Fremantle in Round 18 and two against Essendon in Round 22.

On the other hand, Roach was a prolific goal-scorer who finished his career as the second greatest goal-scorer at Richmond, but has been overtaken by two fellow Tasmanians (Matthew Richardson and current champion Jack Riewoldt) and now sits fifth on the all time top 100 goal-scorers list at Tigerland.

While both Rance and Roach may slip down one position on Richmond’s greatest game-players list in season 2020, there is no doubt that these two champions will remain in the hearts and minds of Tigers supporters well into the future.