The decade began with many of the golden generation having one last hoorah in the World Cup of 2010 under Pim Verbeek before a new team and footballing model was moulded by Ange Postecoglou, which culminated in Australia claiming the Asian Cup for the first time in 2015.

Goalkeeper — Matt Ryan
Australia has been blessed with some unusually good goalkeepers over the last 30 years, and Matt Ryan is a worthy successor to idol Mark Schwarzer. An excellent shot stopper, Ryan’s ability with the ball sets him apart from his predecessors.

Continental experience in Spain and Belgium have furthered his development as a true sweeper keeper. First choice since his arrival at Brighton, he is now playing in his third successive season of Premier League football.

Ryan won goalkeeper of the tournament as part of the Asian Cup-winning side of 2015 while twice winning Belgian keeper of the year with Club Brugge and two PFA Footballer of the year awards. Aged just 27 and with 59 Socceroos caps since 2013, Australia can expect another decade of good football from Ryan ahead. He appears the captain in waiting. 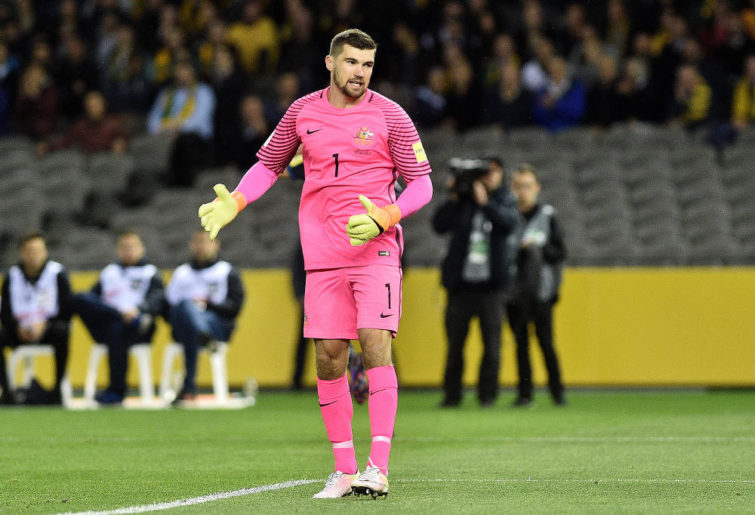 Right back – Luke Wilkshire
Luke Wilkshire was one of the few Socceroos players peaking early in the decade, playing 28 games and scoring five goals from right back across 2010 and 2011. The Socceroos have rarely had outstanding candidates at full back, so Wilkshire might be the greatest.

Consistently playing at a high level for Russian side Dynamo Moscow between 2008-14 provided the platform for the Socceroo. Eventually finding himself back in Australia, he would win a title at Sydney FC in his swansong season of 2017-18.

Having served ably in the World Cup of 2014, that year would mark his last appearance at international level, as Postecoglou turned to the future. One of his proudest moments was when he put away the penalty to seal a 2-1 victory over Germany in Mönchengladbach 2011.

Centre back – Trent Sainsbury
Trent Sainsbury is consistently excellent when he appears for Australia. If only he could find such consistency at club level. Having begun his career at the Central Coast Mariners, Sainsbury moved to Dutch club Zwolle for three seasons before having short stays in China, Italy and Switzerland before once again returning to the Netherlands.

Unable to truly solidify himself within a team since he left Australia, the Perth-born centre back finds himself at Israeli club Maccabi Haifa.

Despite this, Sainsbury has consistently been the Socceroos’ classiest defender, winning man of the match in the Asian Cup final of 2015 and making the team of the tournament, while standing out in the 2018 World Cup.

Having made 48 appearances for the national team since 2014, all Sainsbury requires to become a Socceroos legend is some long-awaited stability.

Centre back – Mark Milligan
Despite making his debut way back in 2006, all but ten of Mark Milligan’s 80 caps for the Socceroos came in the last decade. Something of a mainstay who could ably slot into either midfield or central defence, he slides in here at centre back due to a greater wealth of midfield options.

Milligan spent much of the decade as a Melbourne Victory player and he has represented the A-League admirably on the world stage, captaining Australia 18 times across the decade and maintaining a consistently high standard.

Left back – Matt McKay
A clever little left-sided player who featured heavily for the Socceroos in the first half of the decade, Matt McKay’s 59 caps make him a worthy addition to the team. Similarly to Milligan, McKay slots into defence rather than midfield due to a relative weakness in back line options.

His other parallel to Milligan is that he achieved many of his Socceroos exploits while being an A-League regular. Although McKay’s career did include a few brief overseas stints in China, Korea and Scotland, the Queenslander spent the vast majority of his career at the Brisbane Roar.

A vital member of the Socceroos’ Asian Cup squads of 2011 and 2015, the home-soil victory of 2015 would all but bring a close to diminutive left footer’s contributions for his country.

Centre midfield – Massimo Luongo
Plucked from the relative obscurity of Swindon Town, Massimo Luongo burst into the national consciousness with a goal and assist in the opening 4-1 victory over Kuwait in the 2015 Asian Cup campaign, claiming man-of-the-match honours.

Having laid down a marker, Luongo would save his finest moment for his biggest stage yet: the 2015 Asian Cup final against South Korea. 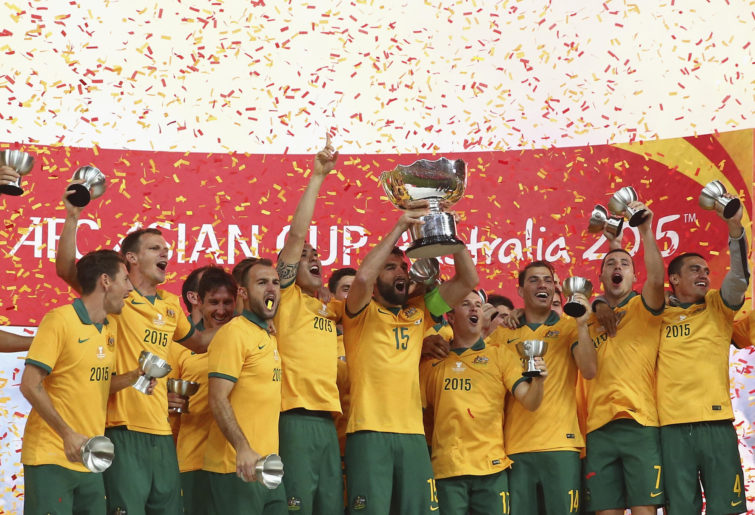 A deeper look into Luongo’s history reveals he always possessed talent, spending several years in Tottenham Hotspur’s youth system. Plying his trade over past three seasons with QPR in the Championship, Luongo is in contention for promotion this season as a part of a fourth-placed Sheffield Wednesday side. Entry to the Premier League could elevate the recently turned 27-year-old’s Socceroos career to new heights.

Centre defensive midfield – Mile Jedinak
The captain of the decade, Mile Jedinak was a towering presence in both stature and legacy. Beginning the decade with a move to a Crystal Palace side struggling in England’s second division, Jedinak would captain them through the play-offs and into the Premier League.

A strong physical presence, Jedinak possessed skills that belied his physicality, exemplified by his occasional dead-ball wonder goals. His greatest goal in the Premier League was a 30-yard stunner against Liverpool in 2014-15.

An exceptional player at club level, Jedinak carried an even bigger load across his broad shoulders for the Socceroos, regularly playing out of his skin. Nominally a defensive midfielder, Jedinak would score a remarkable 20 international goals from 2011 onwards, including three at two different World Cups and one in the Asian Cup of 2015.

Asian footballer of the year in 2014, Jedinak would captain the Socceroos through two World Cups and their maiden Asian Cup victory in 2015. He is a leader of rare quality.

Centre midfield – Aaron Mooy
A unique talent, the Sydney-sider is the Australian who is currently playing at the highest level. Beginning his career at Bolton Wanderers, Mooy would return to the A-League with Western Sydney before shining brightly enough at Melbourne City to earn his return to England.

As a Huddersfield Town player, Mooy was player of the year in his first season as the club fought their way into the Premier League. Currently at Brighton pulling the strings from midfield, the Australian is central to his team’s survival hopes.

A wonderfully two-footed player and a real midfield maestro, Mooy has an eye for angles and passes others simply cannot see. Having only appeared 43 times for the Socceroos due to the 29-year-old’s status as a late bloomer, Mooy is central to Australia’s hopes over next few years. Capable of chipping in with goals, his real value lies as a conductor and playmaker. 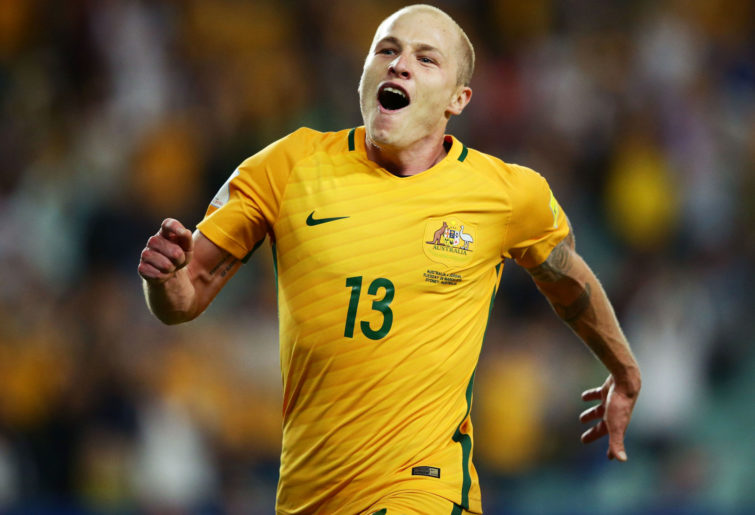 Right wing – Tom Rogic
Something of a surprise pick, Tom Rogic takes a spot over the more heavily capped Robbie Kruse due to his greater technical and goal-scoring abilities. A regular for Scottish giants Celtic since 2015, the former futsal gun combines unusual height with a striking left foot and deft skills.

Rogic has been hugely successful in a dominant Celtic team, winning four league titles and eight cup competitions. Perhaps his greatest moment came when scoring a 90th-minute stunner against Aberdeen in the 2017 Scottish Cup final to see Celtic to complete the treble.

Unfortunately missing out on Australia’s Asian Cup-winning team, Rogic has since become Australia’s X-factor, making the 2019 Asian Cup dream team. Dubbed the Wizard of Oz by Celtic fans, Rogic possesses the ability to score world-class goals. He has nine across the decade in 47 appearances for the national team. Just 27, Rogic and his left foot wand are entering their prime.

Striker – Tim Cahill
Aged 30 when the decade began, you would have been forgiven for thinking Australia had seen the best of Tim Cahill. Forgiven, but wrong. Cahill’s club career may have been on a downward trajectory from 2012 onwards, but he would reach peak goal-scoring form for the national team mid-decade as he scored 16 goals from just 22 appearances across 2014 and 2015.

Cahill would score undoubtedly the Socceroos’ greatest goal ever at the 2014 World Cup as he let a high-floating Wilkshire cross drop across his body before punching a left-foot volley into the roof of the Netherlands’ net. One of the great World Cup goals scored by any player, it would earn a FIFA Puskás Award nomination, setting the stage for Cahill’s next triumph. 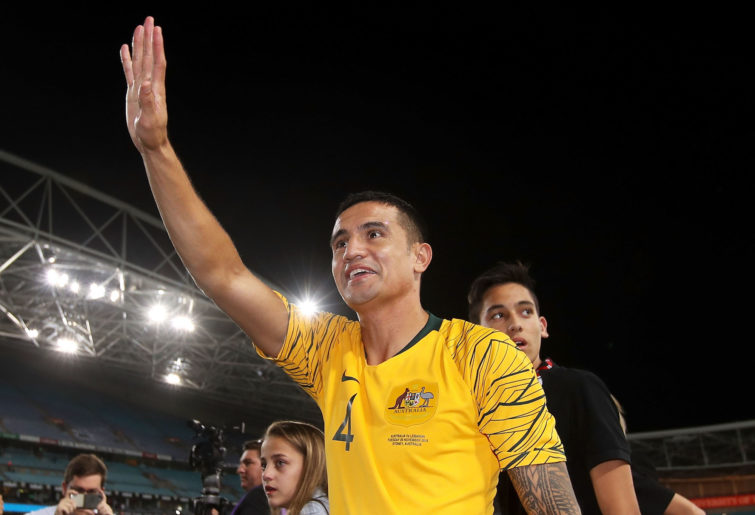 In 2015, with the Asian Cup coming to Australia Cahill would produce his most prolific calendar year for the Socceroos, scoring nine times. A key man in the Asian Cup victory, Cahill slotted three goals, including the goal of the tournament: an overhead bicycle kick to open the scoring and send the home fans into a frenzy against China.

Cahill’s final achievement would be to see Australia to their fifth World Cup in a row, scoring 11 goals in qualifying, while the wrong side of 35. Cahill closed a story he began back in 2006 with his opening World Cup goal against Japan.

More than anyone else, Cahill contributed to a culture where players played out of their skin at international level and he brought football onto the national sporting stage. Without their all-time leading goalscorer, best ever player, and World Cup talisman, Australia must unearth new heroes for the decade ahead.

Left wing – Mathew Leckie
A gifted pace merchant, Mathew Leckie burst onto the scene at Adelaide United, before heading to Germany in 2011. Shifting between clubs in Germany’s top two divisions, Leckie would find his feet at Frankfurt, before moving onto Ingolstadt and Hertha Berlin, playing consistently in the Bundesliga over the past four seasons.

Postecoglou would bring Leckie into the fold and was rewarded with fantastic performances across the 2014 World Cup. A national team regular ever since, the Victorian-born winger played his role in the 2015 Asian Cup victory and was regularly Australia’s most threatening player at the 2018 World Cup.

Always dangerous for the Socceroos, Leckie has added goals to his game over the past few years, having scored 11 across 63 appearances, with eight of those in the last three years.