Such has been the scale of the summer of Marnus that when it was announced the Australian Test No. 3 had been picked in a one-day squad for the first time you might have been excused for thinking that couldn’t possibly right.

Surely a guy in this kind of form has played ODIs before, right?

Well, no, and for two reasons.

The first reason is that Marnus Labuschagne’s steep run of international form didn’t properly kick off until the second Ashes Test at Lord’s in August. The second is – quite strangely when you consider the usual proliferation of seemingly pointless ODI series – that Australia hasn’t played a one-dayer since losing the World Cup semi-final in July to eventual winners England.

More than six months between games seems like a retro throwback – not unlike the playing strips, which seem popular again.

Regardless, Labuschagne’s inclusion in the squad for the three-game series in India and not at home at this traditional time of year seemed like a no-brainer.

After a lean time of it during the English domestic one-dayers with Glamorgan – which he more than made up for during the County Championship – Labuschagne finished the state one-day cup for Queensland sixth on the leading run-scorers list and as one of only eight players to top 300 runs for the series. He was the only one of them to do it at better than a run-a-ball. 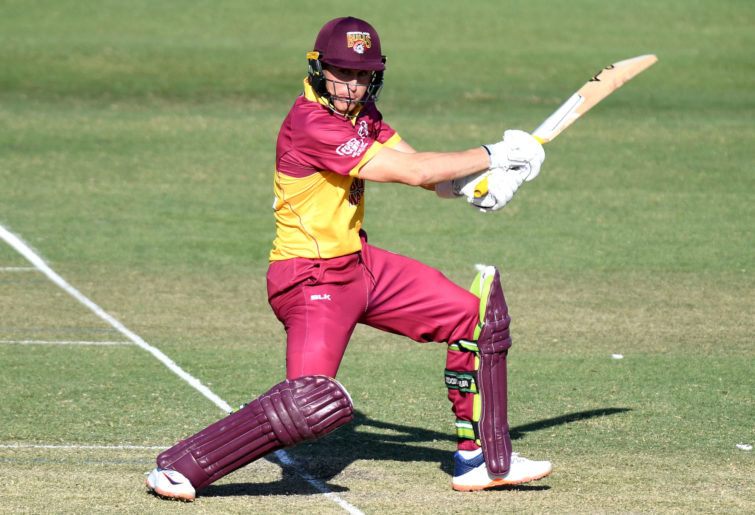 So with Glenn Maxwell left out after his lean World Cup and his break from the game at the time the squad to India was announced, Labuschagne’s inclusion shocked no-one.

Nor did the news on Tuesday evening that he’d been selected for the first match of the series, becoming Australia’s 229th ODI player and having his cap presented to him at the Wankhede Stadium in Mumbai by Steve Waugh.

What we don’t know for sure is where he was going to bat. He was padded up while David Warner and skipper Aaron Finch went about their record opening partnership in reply to India’s 255, but so too was Steve Smith.

It’s entirely expected that the two next batsmen in would have the pads on at any given point.

But while Labuschagne was listed at No. 4 at the toss, plenty of live scorecards – including ESPNcricinfo and the host TV broadcasters in India – had Labuschagne coming in at the fall of the first wicket, as he does for the Test team.

Both could still be true.

“There is a fair chance Steve Smith will bat No. 3,” stand-in coach Andrew McDonald told AAP.

“The top three fall into Warner, Finch and Smith.

“And then the conversations start about how we will go through the middle and what balance team we want to play.”

But with Warner and Finch coasting to the target unbeaten and inside 38 overs, we’ll need to wait until Game 2 in Rajkot on Friday evening (AEDT) to find out for sure where Smith and Labuschagne will bat.

And the status of the match when the first wicket falls may still dictate things. If one of Finch or Warner fall early, then Labuschagne might be preferred, while Smith is probably more likely to get up to the required tempo and run rate if the opening stand is profitable.

But wherever they bat, Labuschagne’s inclusion is a good thing. Having that core of Warner, Labuschagne and Smith carrying through to the one-day format can only strengthen the platform laid down by the top order.

The team list had Ashton Turner, Alex Carey and Ashton Agar following in Game 1, but this middle order is where the variety can and will be provided.

Peter Handscomb and D’Arcy Short are in India and are different styles of players if the extra bowling options provided by Turner and Agar aren’t required in either of the remaining games.

Maxwell and Stoinis’s Big Bash League form – and Mitch Marsh, for that matter – is such that they’ll be well and truly in the frame when the next limited-overs squad is selected. Any combination of those three could easily slot into a more fluid, horses-for-courses middle order.

Australia’s pace attack looks to pick itself and it feels like the top order is being positioned the same way.

And it’s hard to see how stability can be anything other than good.