Then Lucy McEvoy nominated the Melbourne zone instead of Geelong, so I scaled back my expectations.

Then, in the draft, three of Geelong’s most highly touted juniors failed to get selected, with the Cats instead choosing more mature-bodied players from the VFLW. The Geelong coaching staff know far more about a young player’s attributes than anyone else does, so despite Luka Lesosky-Hay, Paige Sheppard and Abbey Chapman making big waves in the NAB League, they must fallen short at the AFLW Combine testing, and given rise to concerns about how well they’d make the jump to a higher level. Right?

Or perhaps the Cats felt they already had enough young kids from last year’s draft, and wanted more experience in the side. So these VFLW players had better be good, because if you pass over a 20-possession-per-game junior like Lesosky-Hay then struggle without her, it could come back to bite you. Particularly if she and others lose faith in this whole Geelong zone thing and head to the bright lights across the bay in search of more appreciation.

The other reason to be sceptical of Geelong’s chances is that their playing style in 2019 was shockingly ugly – one car crash, rolling-maul stoppage after another, the kind of football that turns potential AFLW fans into people who’d rather watch anything else.

Yes, they made a semi-final, but that was only because of the outrageously lopsided conference system, when they were really the seventh best team out of ten. Last season Geelong only averaged 20 points per game, the lowest in the competition, while champions Adelaide averaged 59.

Comparing the Cats to the Crows might be a little unfair, but when your average score is just one third of the league’s best, you know there’s something wrong with the way you play the game. 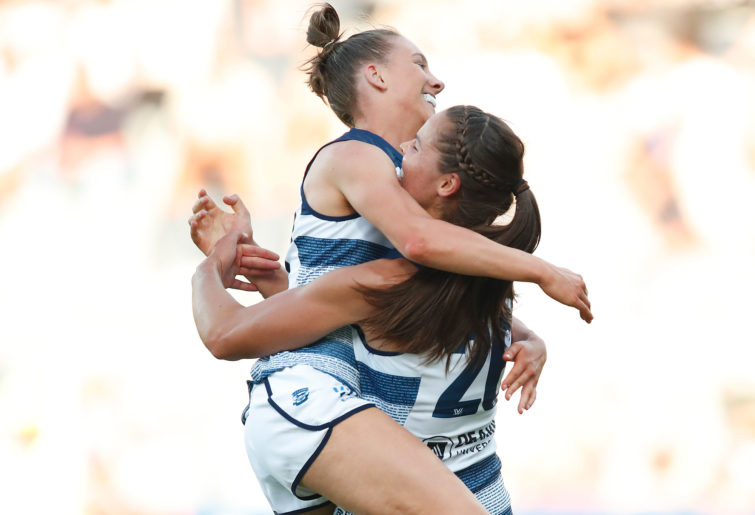 The Cats weren’t celebrating many goals in 2019. (Photo by Adam Trafford/AFL Media/Getty Images)

However, recent comments from Cats coach Paul Hood suggest that he’s aware of the problem, and that his Cats will be playing a much more aggressive, up-tempo style this season. Another reason to be optimistic that 2020 will be different is the sheer amount of upside already built into the club, with large improvements due from many existing young and inexperienced players before we even get to the new draftees.

Draft aside, the Cats’ biggest inclusion this season will be the return of Nina Morrison from her ACL injury. She only played one game last season, but it was a ripper, with Morrison being best on ground and showing that the Rising Star competition was a two-horse race between her and Maddy Prespakis.

Whether Prespakis would have still won that award if Morrison hadn’t been injured is a coin toss. Morrison is really that good, and her re-inclusion will transform the Cats’ midfield. If her recovery has affected her pre-season and she isn’t quite fit enough to manage the midfield, she could just as easily slot into the forward line, and would probably be a star there as well.

With her will be the powerful and ever-improving Richelle Cranston, and the excellent Olivia Purcell, who gets my vote for the most underrated player in the AFLW. These three are all guns, and all different: Cranston with her physicality, Purcell with her clever ball-winning and distribution, and Morrison with her outside pace and class.

Renee Garing, Hannah Burchell and Cassie Blakeway add some useful depth, Sophie Van De Heuvel could be due for a breakout season with her speed (although she may play forward), and Aasta O’Connor will be competitive in the ruck.

The back line looks tough, too. Meg McDonald was Geelong’s best player last year, a recent rise in form suggesting she could reach new heights again this year. Mel Hickey is a veteran halfback, and then there’s the three kids: Rebecca Webster, Georgia Clarke and Millie Brown.

Brown (daughter of Paul Brown and a father-daughter selection) is a new addition and the least experienced, but probably the most highly rated, and is coming off a huge NAB League season. Webster and Clarke will be in their second seasons, and will have improved accordingly. Geelong’s back line was a strong point last season, but I’m tipping the kids to really nail down those positions this year against some more experienced internal competition.

Up forward, the Cats will similarly be looking for second-year improvements from the talented Denby Taylor, and for an impressive first-season debut from Geelong Falcons leading goal-kicker Mia Skinner, who was comfortably the leading goal-kicker in the NAB League last season.

After them, there’s the solid Phoebe McWilliams and twin talls Kate Darby and Maddy Boyd. The ability is there, but coming off such a low-scoring season last year, we haven’t yet seen what any of these forwards can do at AFLW level if they get the ball delivered quickly and accurately. This season could be the test.