The happy slam now has the most advanced infrastructure – three roofed stadiums – and many players say it has the best facilities and it ranks second in slams in terms of prize money.

Simply put, the Australian Open is no longer the ugly duckling grand slam of tennis. It belongs.

However, one part of it needs addressing.

It, like the US and French Opens, should dispose of the system whereby some players get an extra day to rest at the business end of the tournament.

Take the Australian Open men’s final, in which Novak Djokovic edged out Dominic Thiem in a topsy-turvy five-setter.

The Austrian had spent nearly six hours longer on court than Djokovic – which is no fault of the Serbian’s, I hasten to add – and had to contend with one day’s less rest.

In the early stages, the fifth seed looked flat. His shots appeared to have less pop on them than usual and he seemed a little lethargic – not surprising after two very physical matches against Rafael Nadal and Alexander Zverev.

Thiem grew into the match and almost won it, thanks in no small part to his immense fitness, perhaps running on adrenaline, being six years younger as well as his huge ground strokes.

But it is not too much to ask to have a fairer and more level playing field heading into one of the biggest matches of the year.

Before Sunday the win-loss record since 2000 for men who played their semi-final a day earlier was 11-9. Now it’s 12-9. It is surprising that the extra day off seems to bring with it little advantage, going by the numbers.

This is an insufficient amount of data, however, to draw an accurate conclusion from this. Such a trend could be masked by the quality of the opponent, injuries, time on the court for their previous six matches, distance run in those matches and many other things.

Nevertheless, players should start from a level playing field or at least as close to one as possible. It just makes more sense to have what Wimbledon has and not give a player more time to recover.

Why do the French Open, US Open and Australian Open stick to this system? Money, perhaps?

For instance, tickets for the men’s final at Wimbledon are more expensive than the women’s final due to the demand. Is it more profitable to have days on which both men and women play together? Who knows.

Regardless, this staggered system should be changed.

It’s time for the Australian Open to be at the forefront of change yet again. 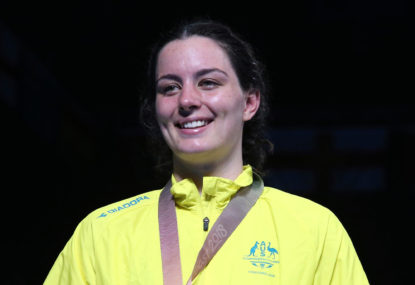