Giannis Antetokounmpo is the best player in the NBA, he is the reigning MVP and he is well on his way to going back-to-back in season 2019-20.

It has been a rapid rise for the kid from Greece who was drafted at pick 15 in 2013 as a project player that weighed just 86kg. Now tipping the scales at 110kg, Antetokounmpo has grown into a man that is dominating the NBA each time he steps out on the court.

The Milwaukee Bucks hit the jackpot when drafting Antetokounmpo. It is rare to draft a kid so raw that develops so quickly into a generational talent. From his first season in 2013-14 you could see he had plenty of talent and his future would be bright if his situation was right. He improved all major stats every season, which was highlighted in 2016-17 with him winning the most improved player of the year award and making the All NBA second team and All Defensive second team.

Suddenly the Bucks had a superstar that they could build a franchise around, something a small-market team like Milwaukee crave so badly. They made the playoffs in 2017 and 2018 but both seasons resulted in first-round exits. However, management felt they were close to being genuine challengers in the Eastern Conference. 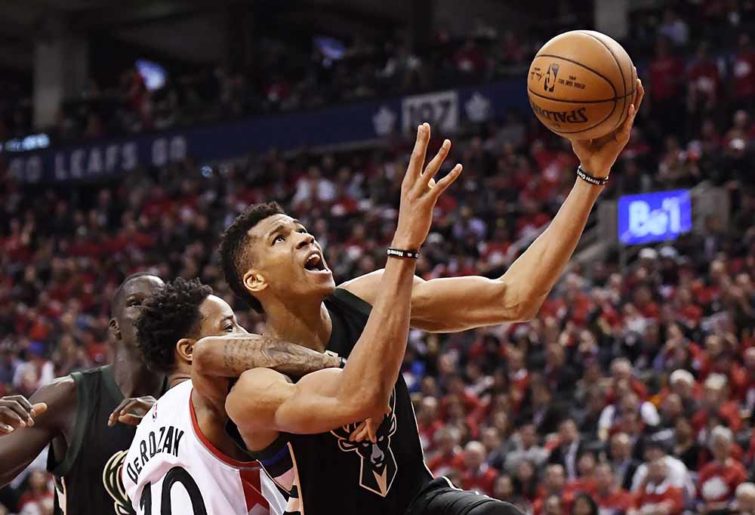 They sacked coach Jason Kidd and signed Mike Budenholzer for season 2018-19. The main improvement for 2018-19 was Antetokounmpo had naturally developed, bulked up, turned 24 and his support cast could finally be relied on. The result? First seed in the East and 60 regular-season wins.

Antetokounmpo had cemented his placing in the NBA with his first MVP and the Bucks won their first playoff series since 2001. Milwaukee would eventually go down in Game 6 of the Eastern Conference finals against eventual champions, the Toronto Raptors.

Milwaukee were favourites heading into the Eastern finals and it was a missed opportunity to advance to the Finals after leading 2-0. As most sports fans know, teams need to have tough losses to drive them to learn how to win in big playoff matches and series. It was the Bucks’ first Eastern Conference finals experience and they would have learnt so much from it.

Now that they’ve had a taste, it is time to win the East and contend for in the NBA Finals. Currently boasting a regular season record of 46-7, Milwaukee are clear favourites to win the East.

Anything short of playing in the NBA Finals this season is a huge failure for Milwaukee, which could lead to catastrophic results to the franchise going forward. Antetokounmpo is contracted until the end of next season, then he becomes an unrestricted free agent.

While Milwaukee are poised to make a deep playoff run this season, an exit any earlier than the NBA Finals will have Antetokounmpo thinking ‘can this franchise ever get me to the top?’ That’s something you don’t want the cornerstone of your franchise thinking heading into the last season of his contract.

Say the Bucks do make it to the Finals this season, win or lose, Antetokounmpo will be happy with the current state of Milwaukee. A win and he might even sign an extension as soon as he possibly can. A Finals loss and he will know the Bucks are close to winning and want to come back for redemption. Being from Greece eliminates any of the go-home pull that a lot of American athletes face throughout their careers, so that is definitely in the Bucks’ favour.

Antetokounmpo’s mentality is win-at-all-costs to the point that he won’t even accept off-season work-outs with his rivals, definitely a mamba mentality. He wants to win now and if the Bucks don’t deliver an NBA championship to the city of Milwaukee in the next two seasons, they might just lose their superstar they call the Greek Freak.

Any team would love to have the services of Antetokounmpo and if he was to test free agency in the summer of 2021, which a lot of teams will be cashed-up for, you might just find Antetokounmpo on the move out of Milwaukee. A departure could just sink Milwaukee as he would leave as an unrestricted free agent meaning no trade is required. It would be a long way back to contending for a small-market team that has only won a single championship all the way back in 1971.

A failed season this year and Antetokounmpo’s mind starts wondering whether the grass is greener at a different franchise. Milwaukee will be doing everything and anything to keep their superstar and the best way to keep him is to win.

Antetokounmpo will do his part each night. It’s up to the support cast to prove they can win a big playoff series and advance to the NBA Finals.

It's time for the NBA to overhaul the MVP voting process but they never will.

The NBA starts on Wednesday (AEDT) and after running the rule over the favourites, contenders and also-rans of the Western Confernece on Monday, we…

This whole NBA Finals was themed by legacies. But what makes it so different and does different mean worse? Especially when we understand it…

Giannis Antetokounmpo has delivered the Milwaukee Bucks their first NBA championship in 50 years with a 105-98 victory over the visiting Phoenix Suns. With…