So following on from last time’s D team, we come to the E team.

They have struggled a little to field a competitive squad and are the first to contain no Hall of Fame members, but there is some quality there in the openers and some pretty good first-class bowling records.

Matthew Elliott (VIC) (captain) – 21 Tests, 1172 runs at 33.48, three centuries, 199 high score
Matthew Elliott was a beautifully correct, dominant opening batsman. He had a stellar first-class career, scoring over 17,000 runs and 50 career centuries at an average of 47. But despite a great start to his Test career, a combination of injuries and poor form saw him play fewer Tests than expected from a player of his talent.

Elliott came onto the scene in 1996. His first two series, at home to the West Indies and away in South Africa, were solid but it was in the 1997 Ashes in England that Elliott really announced himself. He scored 556 runs for the series at an average of 55.6, over 100 more runs than any other player from either side, including a century at Lord’s and 199 in Australia’s innings victory in the decisive fourth Test in Leeds. The world was at his feet.

Elliott scored another century in the 1997-98 home series against New Zealand, but only managed 51 runs across three Tests at home to South Africa. After a break from the side he toured the West Indies in 1999 but only managed 69 runs in six innings and was dropped. He returned very briefly as a veteran in 2004 against Sri Lanka in Darwin but managed only one and a duck and his Test career was over.

Elliott continued to be prolific at first-class level and finished his career with the sixth most career Sheffield Shield runs, topping the season runs list four times and scoring 155 in Victoria’s 2004 Shield final win over Queensland. That 2003-04 season was his most successful and his 1381 season runs is the third highest in Sheffield Shield history. 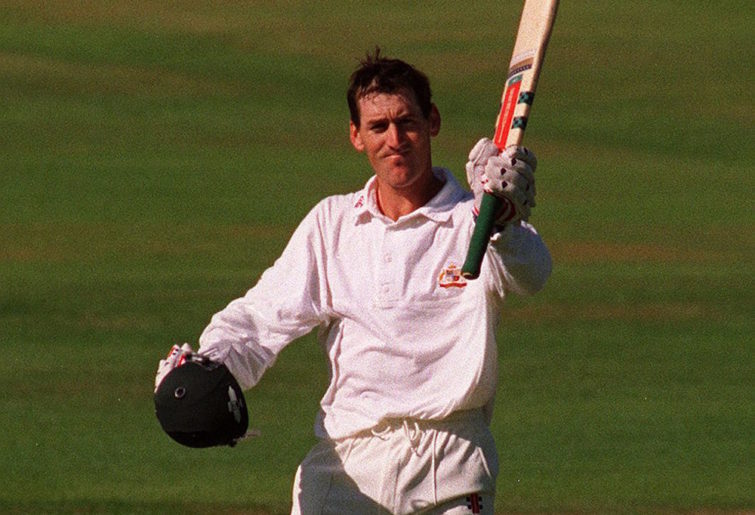 Ken Eastwood (VIC) – one Test, five runs
Ken Eastwood was a solid left-hand opening batsman for Victoria. He played first-class cricket for 13 years between 1959 and 1972, but only ever played one Test towards the end of his career in 1971, scoring five runs. His 2722 first-class runs at 41.87 and nine hundreds shows his quality.

Eastwood’s single Test was odd in a number of ways. He was 35 years old and had started the season out of the Victorian side. He only got selected when Bill Lawry sat out a game with a minor injury. Eastwood hit 201 and then 177 two games later.

Unusually, Eastwood has two baggy green caps from his one Test. “They gave me two caps to try on for size, and nobody asked for the other one back, so it stayed in my bag.”

The taxi to the team hotel were waylaid, so Eastwood hitchhiked to his only Test match with Terry Jenner. Eastwood’s Test blazer was misplaced and only turned up six months later. He took a wicket with his part-time leg spin, one of only six wickets in his whole first-class career.

After scoring five and a duck, Eastwood hit 221 in his next Shield game and was a chance for the upcoming tour of South Africa, but the tour was cancelled for political reasons and Eastwood was never selected again. Eastwood played club cricket until he was 54 and then umpired for more than 20 years after that.

Wally Edwards (WA) – three Tests, 68 runs at 11.33
At three and maybe out of his depth we have the former Cricket Australia chairman. Wally Edwards had a modest Test career, collecting two ducks and not passing 30 in six innings during the 1974-75 home Ashes. But that’s not surprising, since his first-class career was an unimposing 1381 runs at 30.68 with only two centuries as a defensive opening batsman.

Edwards started his first-class career very well, playing the final two matches of the 1973-74 season and scoring 122 on debut against South Australia, where the Test captain Ian Chappell was the opposing captain. He scored another half century against South Australia in the first game of the 1974-75 season, so he had an impressed Chappell on his side. A half century against Victoria followed, then his second first-class century, 153 against NSW.

But the vagaries of the Shield draw that year saw WA play five games before the first Test and in those last two, Edwards played himself back out of his hot streak. Nevertheless, he was selected for the first Test match on the back of only seven first-class matches. Edwards was dropped after the third Test due to modest returns, but his early season form led to a Shield average of over 50.

In the following year, Edwards averaged 21.64 in the Shield and was never selected again. He returned for one first-class match in 1977-78, scoring 13. Edwards had two aunties who opened the batting together for WA against England in a tour game in 1934.

Edwards became a long-time state selector and at the time of his passing in 2019 he was Australia’s oldest living first-class cricketer.

Ross Edwards (WA) – 20 Tests, 1171 runs at 40.37, two centuries, 170* high score
The middle order is completed by yet another Western Australian Edwards, this time Ross. Ross Edwards was an accomplished top-order batsmen who played 20 Tests for Australia during the 1970s.

Edwards had a successful 1971-72 Sheffield Shield season where he topped the WA averages, scored three centuries and was selected to tour England. He scored 170 not out at Nottingham in his second Test, but followed it up with a pair at Leeds. Back home Edwards hit two half centuries against Pakistan and was well established in the side, averaging over 50.

In 1974-75 Edwards was selected for the home Ashes and although he made a century on his home ground (the first Western Australian to score a Test century at the WACA), his series was underwhelming, as was the following away series against the West Indies.

Edwards toured England again in 1975 and fell agonisingly short of having his name on the Lord’s honours board, being LBW to Bob Woolmer for 99. He scored half centuries in his first three innings, but his form fell away and it was his last international series. Edwards never played in a losing Test series, home or away.

At first-class level, Edwards scored over 7000 runs at an average approaching 40. He was part of a resurgence in Western Australian cricket and the state won four titles during his career, with Edwards averaging over 50 in two of those campaigns.

Edwards was a back-up wicketkeeper and also had the reputation as an outstanding ground fielder, mainly stationed at cover.

Charles Eady (TAS) (right-arm medium fast) – two Tests, 20 runs, seven wickets at 16.00
The all-rounder in this team, Charles Eady, is one of the most interesting, little known cricketers in Australian history. Prior to the emergence of David Boon and then Ricky Ponting, Eady would have likely been Tasmania’s greatest ever cricketer.

Because Tasmania did not play regular first-class cricket and was not part of the Sheffield Shield competition, spectators on the mainland would not have heard of the feats of the great all-rounder. But that all changed when Eady became the first player in a first-class match in Australia to make a century in each innings, achieving the feat against Victoria. Eady also took 8-35 and 4-29 with the ball against Victoria later that season and was selected for the 1896 tour of England.

Eady played only one Test match on tour and another one five years later, with limited success as a batsman but taking regular wickets. His 17 first-class matches on the 1902 tour were played in ill health and form a substantial part of his first-class record, with his home state having limited opportunities. In a low-scoring era, Eady averaged around 23 with both bat and ball in first-class cricket. Taking away his England tour and these figures improve to 28.0 and 22.8 respectively.

But it is for his exploits at club level that Eady is best remembered. And he dominated club cricket, highlighted by scoring an unbelievable 566 in a match in 1902, the third highest score in any type of cricket. What is less well known is that Eady also took seven wickets in the first innings of that match. Four years later Eady took all ten wickets in a club match to underline his prowess with the ball.

In all Eady won nine titles in his club career, scoring over 9000 runs at an average over 51 and taking more than 750 wickets at a bowling average under 13.

Eady later became the head of what is now Cricket Australia and was a state politician in Tasmania. He was an all-round sportsman, playing Australian rules for Tasmania and serving as a club or state administrator in cricket, boxing, life saving, rowing and horse racing.

Phil Emery (NSW) (wicketkeeper) – one Test, eight runs not out, six dismissals
Phil Emery was a top-quality, long-term keeper and captain for NSW during the 1980s and 1990s. He played in the Ian Healy and Adam Gilchrist era, so only played one Test match and also one ODI, but his main claim to fame might just be forcing a young Adam Gilchrist to move to Western Australia to get a first-class opportunity.

At first-class level, Emery averaged over 26 with the bat and effected 384 dismissals. He ranks sixth in the list of most Sheffield Shield dismissals (339) and NSW won three titles during his career, including as captain in 1993-94.

Hans Ebeling (VIC) (right-arm medium fast) – one Test, 43 runs, three wickets at 29.66
Hans Ebeling was another that only played a single Test. But he had a distinguished first-class career for Victoria as a medium-fast swing bowler and leader, captaining them to their 1934 and 1938 Sheffield Shield titles. He took 217 career first-class wickets at 26.58. His career included participating in the first ever tied match in Australia, for Victoria against the touring English in 1933.

Ebeling’s single Test was on the 1934 tour of England where he took 62 wickets at 20.80 for the tour. Ebeling was also a long-term administrator in Victorian cricket and was a major force behind setting up the 1977 Centenary Test to celebrate 100 years of Test cricket between Australia and England.

Edwin Evans (NSW) (off spin) – six Tests, seven wickets at 47.42
Edwin Evans played six largely unsuccessful Tests in the 1880s, taking seven wickets with his off spin. He was much more successful in first-class cricket, taking over 200 wickets at an average of under 17 from 1875 and being considered one of the premier bowlers of his day.

Evans was the first bowler from either side to take 100 wickets in games between NSW and Victoria, including 7-13 on debut. But his Tests came nearly a decade later and at 37 years old, Evans was not the player he once was.

Sid Emery (NSW) (leg spin) – four Tests, five wickets at 49.8
Emery only played four Tests without much success, but he had a good first-class career, topping the Sheffield Shield wickets in 1909-10 and taking 183 first-class wickets at 23.79 with his leg spin.

While he had little success in his four Tests against England and South Africa in 1912, he toured North America with the Australian team in 1913 where he achieved the double of over 1000 runs and 100 wickets. And apparently while on tour he was almost mauled by a bear while trying to get a photo.

His best bowling figures were taken in the same match that Don Bradman set the all time first-class high score of 451. Thankfully for Everett, he was bowling for the Don’s team that day.

Next up is the F team, boasting a lethal and varied bowling attack.