Many believe Patton will ease into the season, having recovered from his third knee reconstruction, with little pressure or expectation being placed on the 198cm key forward – particularly given the team he has landed at.

Indeed, the Hawks are a team-focused attack, not necessarily targeting any one individual.

The way Hawthorn played was built on fluidity and flexibility, with on-field positional rotations meaning no one dominant player was necessarily staying inside 50 for the entire game.

Only when Mitch Lewis entered the fray did we begin to see them look more dangerous, having had someone with contested marking ability to aim at.

Enter Patton, who will no doubt be the club’s key focus.

At his powerful best, Patton is one of the most damaging key forwards in the competition.

In 2017, he kicked 45 goals in 22 games, averaging two contested marks per game and ranking elite for his shot-at-goal accuracy. Through his peak periods at the Giants, he was always playing second fiddle to the more dynamic Jeremy Cameron.

2020 sees Patton at a club ready to build itself around a key pillar in attack, giving them a strong target as well as ample opportunity for younger talls to develop without as much defensive focus.

There were glimpses in Hawthorn’s first intra-club practice match, and even more when Patton kicked 3.2 from 12 disposals and six marks in the first Marsh Community Series game against the Saints.

Some may cite the statistical analysis provided by Champion Data as an argument against Patton having a successful season – the Hawks were ranked 17th in 2019 for retaining the ball once they got it inside 50, 16th for marks from inside 50s and 12th for percentage of inside 50s resulting in scores.

It was difficult to maintain attacking stability, however, when Jack Gunston was poor, Tim O’Brien found his niche in defence, Paul Puopolo dropped off completely, and Conor Nash simply wasn’t a target at all.

Luke Breust enjoyed a decent season as the best forward but it was only when Mitch Lewis stood up that the Hawks looked dangerous in attack.

Hawthorn scored 49 per cent of the times they targeted Lewis, which highlighted the importance of landing a star key-forward to provide a more efficient and effective route forward.

Make no mistake, this forward line belongs to Patton now and his ability to bully key defenders will be a factor in his and Hawthorn’s successes in 2020.

Patton was specifically targeted by the Hawks, and the club tends to only make big moves for players that will be crucial in the way they play, as has been seen from Shaun Burgoyne, Tom Mitchell, Jaeger O’Meara and Tom Scully. 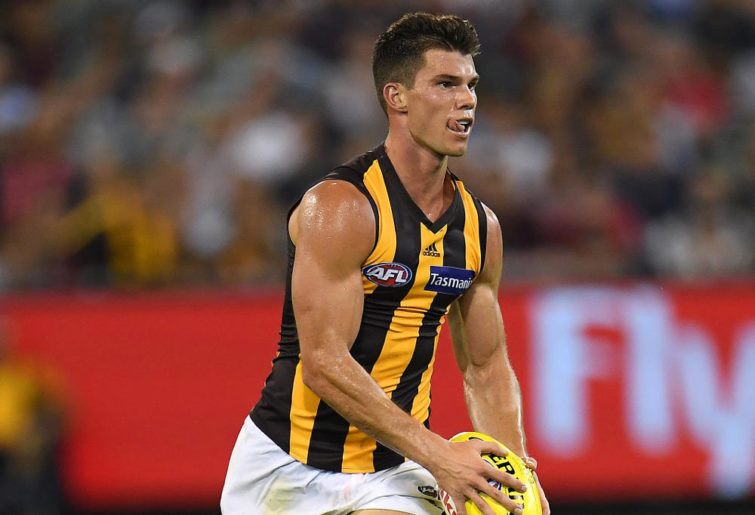 Of course, his aforementioned recurring knee issues will be at the front of the minds of pundits and fans alike.

Many forget that, while Patton hasn’t played senior football for 18 months, the 26-year-old actively made the choice in mid-2019 to not play for the rest of the season.

He was fit to play after Greater Western Sydney’s bye, but elected not to, so as to prepare himself both physically and mentally for 2020.

He sat out 2019 in a not-completely dissimilar way to which injury-prone star Kawhi Leonard sat out the remainder of the 2017-18 NBA season with the San Antonio Spurs.

While Leonard had reported bad blood with the Spurs at the time due to what he believed to be mismanagement of an ongoing quad injury, he too elected to use the rest of the season as recovery for a new team.

Motivations aside, these two stories have the potential to follow a similar path.

For those who do not follow the NBA, Leonard was traded to the Toronto Raptors, which was far from his preferred destination, but he led the team to an extraordinary NBA championship victory, winning Finals MVP in the process.

Patton hasn’t had the previous success of Leonard, however he has had enough of an impact to know that when fully fit, he is one of the best forwards in the league.

The fact Patton has landed at the team that is best equipped to manage long-term injuries that require ongoing support is simply an added bonus.

He can look at O’Meara, Scully and even Burgoyne, and have full belief that he will not only be able to play a full season, but also that his best footy can still be ahead of him.

While internal expectations may be for Patton to get through 2020 unscathed and playing his small part, the reality is that in his ninth season and with no clear concerns about his fitness, Patton is ready for so much more.

Fans can cast aside their fears for how Patton will fit in their team, while opposition fans can throw away any negativity towards Patton or their low expectations.

2020 is Jonathon Patton’s year and, much like Kawhi Leonard, he has a point to prove and will have at least one medal around his neck come September.