Is Mason Cox the odd man out at Collingwood?

It is often asked if one of those players has to go due to salary cap restraints, but maybe that player should be someone else.

Mason Cox is also seemingly out of contract this year after signing a three-year contract at the end of 2017 for around $500,000 a year, but it was reported last year that he has a trigger for a fourth season, which he is all but certain to hit.

While this means Cox will likely be contracted for 2021, Collingwood should still think about trading him. Cox hypothetically leaving brings up questions on who his replacement would be.

Collingwood are not blessed with key forward depth, but they do have options for Cox’s ruck-forward role. Veteran Ben Reid filled in when Cox was injured last year, but he is questionable as a long-term option given his age and injury history.

Jordan Roughead ended the home-and-away season at full-forward, but he is needed at fullback.

The most obvious replacement looms as new recruit Darcy Cameron, who impressed on Sunday in the Marsh Community Series game against Richmond with his craft in the ruck and two goals up forward.

It is too early to tell if Cameron is a legitimate replacement, but he is an option, something Collingwood has lacked over the last couple of seasons.

The popular view was that even when Cox was struggling, Collingwood could not afford to drop him because they had no one to replace him.

Cox has ridden the wave of media and public opinion, having his role both praised and questioned during his swings in form. He can dominate games, but the main reason he is in the team is for the role he plays in Collingwood’s structure. His impact on a game is not only measured by his individual stats, but how he brings the ball to ground and creates a contest.

He is perfectly suited to this forward role given his 211 cm frame, and he is no easy reprieve for opposition ruckman when Brodie Grundy is off the ground. Cox does play a valuable role for the team; it is just a matter of whether that value equates to $500,000. 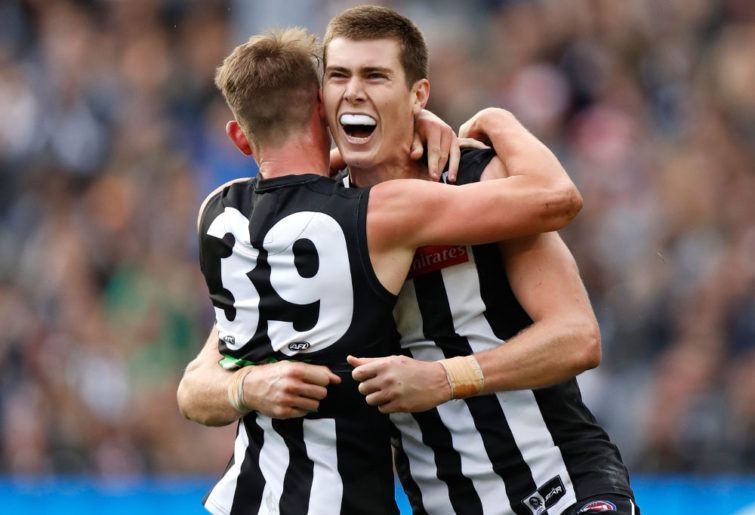 When he won the Neale Daniher Trophy or tore apart Richmond in a preliminary final, Cox looked like a half-million-dollar player. But when he has struggled or just played his basic role, it is questionable whether his play equals his pay.

To put this into perspective, fellow out-of-contract key position players Jordan Roughead and Brody Mihocek are on much smaller deals. Roughead was given a lifeline by the Pies late in the 2018 trade period, while Mihocek is still on a rookie deal.

Both players finished in the top ten in the B&F last year and Mihocek won the club’s goalkicking. They had a larger impact than Cox, but are on lesser deals.

When comparing Cox to some of his other out of contract teammates, another issue is that he will be 29 years old by the time the season starts. In comparison, Moore and De Goey will both be 24.

This is not to compare to Cox as a player to Moore and Do Goey, but to show his unique situation given his late start to the game. Cox joined the club in the same year as Moore and De Goey (2014), but he is five years older and has less football experience, given that he only held a footy for the first time in 2014.

While Cox’s later start could mean continued improvement and less mileage on his body, at 29 he is already falling out of the prime age for most players. There is always a club looking for a key forward or ruck during the trade period, roles that Cox can play.

It was reported last year that Essendon had made inquiries about Cox and they could be interested again if Joe Daniher does leave the club. If a player does have to go to ease Collingwood’s salary cap, Cox might be the best option.

Sometimes too much of a good thing can extend too long a time, and success on and off the field can cloud just when the time has come to move on.

Collingwood’s forward line has presented a challenge for opposing teams over the last couple of years, with several goal kicking options.