AFLW Finals Round 1 at a glance

Here’s the quickest possible glance at the most hurriedly assembled, slapdash excuse for a post-season in the history of postseasons…no, I take that back.

There was one season – 1982, I think – when a players’ strike cut the NFL season in half and created a 16-out-of-28 playoff scenario (the same ratio as the AFLW has this year) that vaulted the surprising Washington Redskins into the Super Bowl championship. To give you an idea how screwy that season was, the most valuable player that season was Washington’s placekicker, of all people – a position which only takes the field for perhaps 15 per cent of a team’s plays at most.

Hopefully, these finals fairly represent the effort these players and coaches put into their pandemic-shortened season (and here’s hoping we get all three rounds in before any full stoppages take place).

Saturday – North Melbourne vs Collingwood at Ikon Park
The oddsmakers say Kangaroos by 15.5; the ELO-Following Football ratings computer says the Kangas win by 12. AFLW’s website asked their expert Sarah Black to do some predicting, and she’s calling this game for North by just five. And our own Avatar gives this to North as well, expecting a margin of 16 points.

Given the suddenness of the situation, any site in Melbourne is probably an acceptable one, but given that each team has played here once this season – both as road teams, both ending up winners albeit to dramatically differing competition – it’s an odd setting for their finals match-up.

The setting is made even odder, of course, by the thunderous crowd noise that won’t be there. North had been preparing to play at Arden Street on Saturday anyway; it’s strange that they don’t get to host their finals match there instead.

The talent gap is being assumed to get the Kangaroos through this round and on to the prelim finals, but this will not be an easy road for North. The one benefit of this mishmashed finals schedule has been to allow arguably the two most surprising and eager women’s teams into the post-season: Gold Coast, whom we’ll discuss later, and the Magpies, first-time finalists after three unsuccessful seasons.

Under their new head coach, Collingwood has grasped the high-speed style of footy that has led to success for many other teams over the last two seasons, and it cannot be stressed enough that while both teams are technically first-time finalists, for North it’s more of a relief to have got there since that destination has been assumed for two years now, while for Collingwood it’s a joy and a delight to have been gifted this opportunity.

Oh, don’t get me wrong – I’m still picking the Kangas. But I won’t be surprised when Collingwood somehow has a real shot in the fourth quarter and keeps it closer than the 15.5 point spread. An upset here might make it all conference B next week in the prelims. 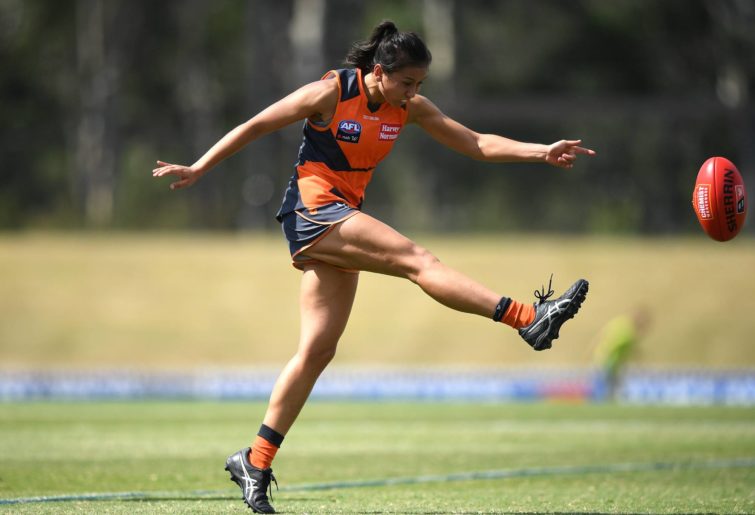 I’m not convinced, although I wouldn’t be astounded by a Melbourne victory. The Giants figured to be playing in their namesake stadium this weekend, while the Demons spent last weekend in Alice Springs and were heading to Fremantle for a crucial game when the rug was ripped out from under them.

They were told they were in finals already and were pointed in the completely opposite direction to go play in Sydney against a Giants team that’s coming off what ended up being a playoff-clinching victory against the defending champion Adelaide Crows. While it’s true that Melbourne’s also a first-time finalist, it’s a situation more like North’s in that it’s more of a relief than an exhilaration, while the Giants are coming from one high to another arriving on their first finals scene.

Again, it’s hard to look past the talent difference between the clubs, but it’s very reasonable to picture the Giants doing the same thing at home to Melbourne what they did on the road to the Crows – holding on for a slim victory that would move them on the same trajectory their male counterparts undertook last season.

This time, I’m going to climb out on that limb and take the Greater Western Sydney Giants to win this game outright à la last week.

Saturday – Fremantle vs Gold Coast at Fremantle Oval
Fremantle is favoured by 16.5 by the oddsmakers; 17.5 by the ELO-FF ratings; by 14 by our Avatar, and a whopping 26 by Black.

And for good reason. Earlier this week, the Suns were mapping out their longshot strategies for finding a way to get past Brisbane or GWS to reach their club’s maiden finals berth for either gender. Suddenly, they’re told that they’ll be flying back across the country (the longest trip possible in the AFL, men or women) to play the other Western Australia club – the, uh, the good one – and that mystical, misty finals berth is indeed theirs already.

From everything I’ve read, they’re perfectly happy to be double jet-lagged – they’re beyond the moon to be playing finals for the first time, even under the most bizarre of circumstances.

After Round 5, just a week ago, you could get $151 for your two-dollar bet on the Suns winning the AFLW championship. At the beginning of the season, the expansion Suns were the longest of the longshots looking forward to the finals, with punters expecting Richmond, St Kilda and West Coast to have significantly better chances at winning in 2020.

Instead, the Suns won more games (two and a half) than any of the other three clubs, and finished ahead of the defending champion Adelaide Crows in conference A.

Unfortunately, the fairy tale ends here. The Suns will be setting in the west on Saturday night, jet-lagged in front of a crowd of silence, defeated by the only AFLW team in history to finish the season with a perfect record and on a six-game roll, eager to warm-up against the new kids on the block in preparation for the difficult games that essentially got pushed back a week.

Fremantle will win and cover by a wide margin, although I don’t expect the Suns to embarrass themselves – just to run out of gas in the second half.

Sunday – Carlton vs Brisbane at Ikon Park
The Lions had the world by the tail – top of the conference, undefeated, having upset Adelaide in their opener and beaten Geelong on their home turf in Round 2, followed by two easy wins to reach the halfway mark at 3-0-1. A grand final preview awaited in Fremantle, and while the Dockers were favoured at home, the Lions would still have that game with North at the end of the season that could reserve them the top spot no matter what happened against Freo.

So what happened? The Magpies happened. They routed Brisbane last week to leave them reeling and looking at the very real possibility of not making finals at all. COVID-19 essentially saved them that embarrassment, fast-passing the finals to arrive immediately but placing them against a formidable foe who should be too much for the Lions.

Carlton’s one hiccup is to that same Collingwood team that ate up Brisbane last week, so that won’t help the Lions figure out how to deal with the Blues tactically.

The oddsmakers say Carlton is a 12.5-point favourite; ELO-FF has them as a 17.5-point preference; Sarah Black thinks they’ll win by 19, and Avatar puts their winning margin at 20. There’s a good reason for that.

Carlton’s simply a much better team, is playing much better right now, and gets home-field advantage (to the extent that the empty but familiar stadium is still an advantage). Take Carlton to win by more than the two-goal margin the oddsmakers predict.

Fairness of the fixture is brought up every year by supporters and quite possibly clubs behind closed doors. I call it a fixture because that is what it is. Many games are guaranteed every year – Richmond versus Carlton in the opening round, Easter Monday with Geelong and Hawthorn, Anzac Day, Queen’s Birthday, two local […]