In these two years Adelaide won consecutive AFL premierships under coach Malcolm Blight, and there is no doubt that the turn of the last century was the most bountiful in talent in Crows history.

In 2000 eight of the top ten Adelaide players of all time were on the playing list, including the first seven in order. Only one of them, Mark Ricciuto, did not play in both premierships, missing the 1997 flag.

Only two new players have broken into the top ten in the last decade, when the grand final appearance 20-year drought was broken in 2017 with Don Pyke at the helm. 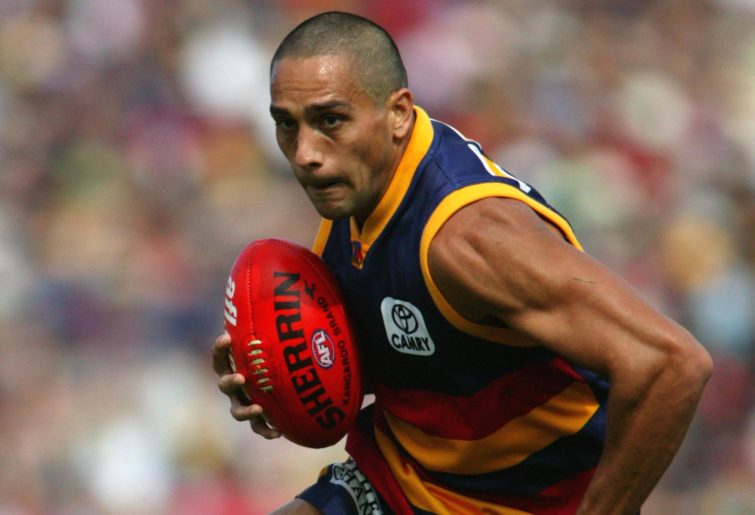 These champions had started to congregate at the club in 1991, when Nigel Smart and Mark Bickley began. Then came Ben Hart (1992) and Mark Ricciuto (1993), followed by their top two champions, Andrew McLeod and Tyson Edwards, in 1995. Simon Goodwin joined two years later and Michael Doherty’s first year was 2000.

For four golden years under the coaching of Gary Ayres these elite players played together. The Crows rose from 13th on the ladder in Malcolm Blight’s last year to 11th and over the next three years played finals, winning two, including the only one at Football Park, but losing four.

During these four years together they shared around the best and fairest award, with Simon Goodwin, Andrew McLeod, Ben Hart and Mark Ricciuto all winning once each. McLeod won in 2001, but his first Malcolm Blight Medal was in the first premiership year of 1997. His third and final win came ten seasons later, a testament to not only his skill but also his longevity.

Not surprisingly, McLeod is the greatest game player at the club, with 340 games, and he will continue to hold that accolade for many years to come. The leading current-day player (David Mackay) is still 120 games adrift of him. Originally from Darwin, in 1994 the right to recruit McLeod, a premiership player in that year at Port Adelaide in the SANFL, was traded by Fremantle for Chris Groom, described as the “worst trade blunder” and “one of the most lopsided trades in Australian rules football history”. As well as his three best and fairest awards, McLeod also won two Norm Smith medals.

Although not achieving any of the AFL or club major awards, Adelaide’s second greatest game player, Tyson Edwards, had career closely aligned with McLeod. Both players were picked up in post the 1994 season by the Crows and played their first games for the club in 1995 and their last in 2010. As well as their two AFL premierships together, McLeod and Edwards had a partnership of 307 games as teammates, an AFL record still intact and unlikely to be broken in the foreseeable future, if at all. Although born in Adelaide, Edwards put the small town of Wynarka on the map as their greatest sporting hero.

No. 3 on the Crows top 100 list is ‘Roo’ Mark Ricciuto, the club’s longest-serving captain and also a triple best and fairest winner. Possibly Adelaide’s most popular player ever – my friends from Victor Harbour even named their dog ‘Ricciuto’ – he won the 2003 Brownlow Medal and made the All Australian team eight times, captaining it twice.

Each of these achievements has been achieved by only two players in the AFL era – the dual captaincy by Wayne Carey and Michael Voss, and the eight-time All Australian selection by Robert Harvey and Lance Franklin.

McLeod, Edwards and Ricciuto: a trio of champions from the same era.