All were nominated for manager of the year at the London Football Awards in 2019, as the astute Australian tactician was on the verge of ending Arsenal Women’s seven-year league drought. But how did he end up among the world’s best managerial talent?

Montemurro, a Melbourne native of Italian descent, began his coaching career on the outskirts of Florence at the Coverciano coaching school that boasted alumni of world-class coaches, including Antonio Conte, Massimiliano Allegri and Claudio Ranieri.

It was here that he learnt his managerial trade and was able to receive a footballing education among the Italian national teams at the Universita del Calcio.

After his studies were complete he began coaching local Australian team Caroline Springs George Cross in Melbourne. Several years later he had the opportunity to progress and capped off a successful tenure with Melbourne City a few years later by winning the W-League twice in a row.

The promising coach later found himself succeeding Pedro Martinez in November 2017 as the manager of Arsenal Women, the club he supported as a boy.

As he arrived at the team, the new Arsenal coach took advantage of his predecessor’s bright foundation with several astute signings who would later go on to become important first-team players, including Dutch international stars Danielle van de Donk and Vivianne Miedema. 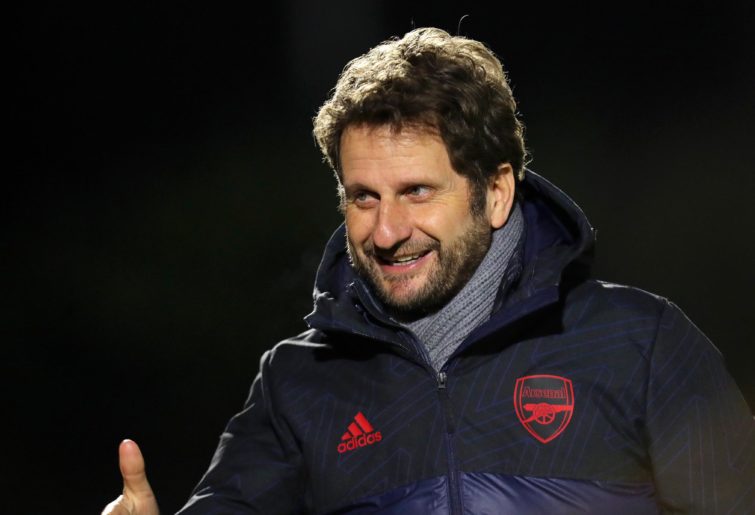 Tactically, Arsenal were looking for a manager with an attacking style of football, and Montemurro fit the bill, with his favoured fluid 4-3-3 system becoming reminiscent of Pep Guardiola tactics or those of former understudy Mikel Arteta.

While Arsenal have been impressive in attack, their defending as a team unit has been equally impressive, with teams struggling to break them down, beginning in midfield as the team press and push back into a midfield five.

With the Melbourne native at the helm, Arsenal were able to win the FA WSL title in 2019 and the FA Women’s League Cup in 2018, and they find themselves in the Champions League quarter-finals, an impressive feat.

Montemurro will be hoping to build upon this success with a back-to-back FA WSL double for the first time since 2012 this year providing Arsenal can finish the season.

As it stands, Arsenal currently trail league leaders Manchester City by four points with a game in hand, and with an unexpected postponement on our hands, who knows when or even if the season will continue.

With five games left for Joe Montemurro’s Arsenal, it’s all to play for.

It was billed as an opportunity for Arsenal to show their improvement against one of the big boys in the Premier League, but it was a missed chance, and the Gunners narrowly lost 1-0 to Manchester City at Etihad Stadium. Coming into the game many fans, including me, felt this was a great chance to […]

With the transfer window now shut and Arsenal getting the elite Thomas Partey from Atletico Madrid, the Premier League takes a break for the international matches that are too be played.