Rather than write about favourite batsmen, I wanted to focus on cricket shots and certain batsmen that were simply great at playing that shot.

I’ve broken these up into a series of individual shots. To make my list, the way the shots are played has to be elegant and/or commanding. That is, they have to make a statement to the bowler that they’re going to get punished every time they bowl a ball that allows that shot to be played. These are in no particular order.

Steve Waugh really announced himself as a world-class batsman during the 1989 Ashes tour to England. He made over 500 runs in that series and it must have seemed to David Gower and co that about 450 of those came from a back foot cover drive/cut shot.

Time after time, English bowlers would put one just short of length outside off stump and Waugh invariably belted it past point or cover for four. This shot really made a statement at the start of the series and in many ways defined his career when attacking bowlers. 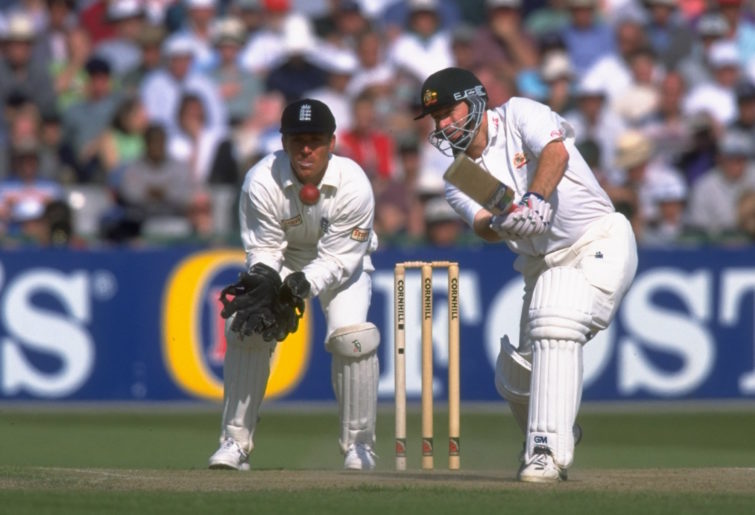 The cover drive is my all-time favourite shot, both to play and to watch. There were two guys who, when they were in great touch, played this shot almost perfectly.

Mike Hussey played this shot as well as any left-hander in the game. Once he was established in the Test side, opposition captains knew this was a go-to shot for him and set fields accordingly, but time after time he’d pierce even the tightest fields.

Damien Martyn was a batsman who relied heavily on timing and when he timed a cover drive, it was simply terrific to watch. It takes a lot for guys like Richie Benaud to be speechless but when Martyn timed what appeared to be a forward defensive push that rocketed past cover to the fence, that’s exactly what happened.

Time and again we hear the on drive is the hardest shot to master in the game. If you watched Greg Chappell or Mark Waugh play this shot, you’d swear it was the easiest to play, such was their mastery.

Both of these players are well known for their elegant shot-making and this shot through midwicket/square leg sums up their batting style perfectly. Both were beautifully balanced when they played the shot and again, the timing was almost always flawless.

The straight drive is a shot that sends a message of intent to the bowler, if the bowler is quick and the shot’s played well. Matthew Hayden wanted to dominate bowlers and when he played this shot, he certainly achieved his aim.

There has to be nothing more demoralising for a fast bowler than to come steaming in and delivering the ball, only to see it disappear back past the run-up marker to the fence. The faster the better for Hayden. When he was at the top of his game it didn’t matter how quick the bowling was, if it was in the slot for a straight drive, it was going to disappear.

The back cut or late cut is a shot different from a normal cut that can go in front of point (some so-called cut shots seem to go back through mid-off these days). It’s such a delicate shot, which requires a good eye and good footwork.

Marnus Labuschagne has really caught my eye with how well he plays this shot.

He does everything right, gets right back, eyes on the ball and hits down on it. Again, it can be a really demoralising shot when a bowler has delivered a perfectly good ball just short of a length on a fourth or fifth-stump line, only to see it deliberately played past the slips for four.

Others who I could watch play this are Steve Smith and Allan Border.

The pull and hook shots have had many great exponents in Australian cricket, but none better than Ricky Ponting.

I’ve lost count the number of times I’ve seen guys come steaming in and bowl just short of a length, then watch the ball being imperiously dispatched through midwicket or behind square leg. The funny part was watching them berating themselves for dropping short, only to do it again in the same over with the same result.

I’m showing my left-handed bias, but left-handers own the sweep shot. Three guys who played this as well as anyone in world cricket were Matthew Hayden, Adam Gilchrist and Mike Hussey.

Hayden absolutely killed the Indian spinners in 2001, largely because he played this shot so well. All three though could make square-leg fielders look silly, hitting shots so perfectly, guys on the fence who only had to move a few yards could not stop boundaries.

Everyone these days seems to loft the ball in all forms of the game, but there was one player who seemed to have no fear when playing lofted shots: Adam Gilchrist.

It’s impossible to forget his 57-ball century against England at the WACA and it was a perfect example of how cleanly he hit the ball. It was also a great example of how much he backed himself, with plenty of guys on the fence, yet he still took them on.

There’s one shot that used to be known as a hoick to cow corner, but is now known as the slog sweep. The name change is because batsman woke up to the fact that this was a good place to hit a ball, something tail-enders had known for years.

Steve Waugh was one who probably brought this shot back into vogue, but Glenn McGrath was a master.

McGrath only hit one six in his entire Test career but that came off a perfectly timed slog sweep, on his way to his highest Test score of 61 not out against New Zealand.

In that same innings he pulled out some vintage hook and pull shots, but I fondly remember that innings for the six and the look of sheer delight as the ball disappeared over the fence.

Captain Grumpy, Allan Border, figures in my last two categories. The first is playing spinners. This is a dying art for a lot of batsmen in Australia, mostly because the pitches don’t offer a lot of turn.

Playing top-quality spin bowling is almost a batting art form all its own. Knowing when to go back, go right forward and move down the pitch are all part of the art and there have been no better exponents than Allan Border and Michael Clarke.

This form of batting requires both quick decision-making and quick feet in order to execute. Both these guys were super talented in this area. It didn’t make any difference if the bowler was getting lots of turn, both were prepared to leave their crease if they thought that was the best way to play the ball. As a result both scored heavily against spinners because they wanted to dominate – and often times they did.

My final shot is the defensive shot, be it forward or backward and as I hinted earlier, the player who has done this better than anyone in Australian cricket in the past 50 years is Allan Border.

His career ran parallel with some of the best fast bowlers the game has seen, yet Border managed to average 50.56 across 265 Test innings. The only way he could have achieved this was through great concentration and excellent defence.

It would be hard to describe Border as an elegant batsman, but he looked absolutely rock solid when playing defensively, bearing in mind part of that skill is knowing when to leave the ball, as well as playing it safely.

If ever the question arises, which batsman would you choose to bat to save a Test, Border has to be the first name chosen.

That’s about it. I look forward to spending a few pleasant hours trawling the internet, looking for some of my favourite guys playing great cricket shots.