Many arguments can be put forward as to how much control the 34 Essendon players who were suspended for the 2016 season for the taking of a banned substance (Thymosin beta-4) had over the decision, but there is no doubt that the season’s suspension stunted the careers of the 12 players who remained on the Bombers’ list in 2016 and the five players who moved on to continue their football at other league clubs.

A look through the Dons’ top 100 game-players list confirms this. David Zaharakis – who did not take part in the 2012 program – is the only player on the Bombers’ current list inside the top 30, and only three other players appear on the list: Cale Hooker, Michael Hurley and captain Dyson Heppell.

It stunted the progress of the club to such an extent that Essendon have won 12 games in each of the past three seasons and continued their run of outs that now extends to 15 years without a finals win.

A proud club – with 16 premiership cups in its trophy cupboard – the Bombers have been blessed with many outstanding champions, the top three of whom were all recruited from their own backyard.

Dustin Fletcher, the son of former champion Ken, finished his career in 2015 on exactly 400 games and was the third of only four players to achieve this milestone. 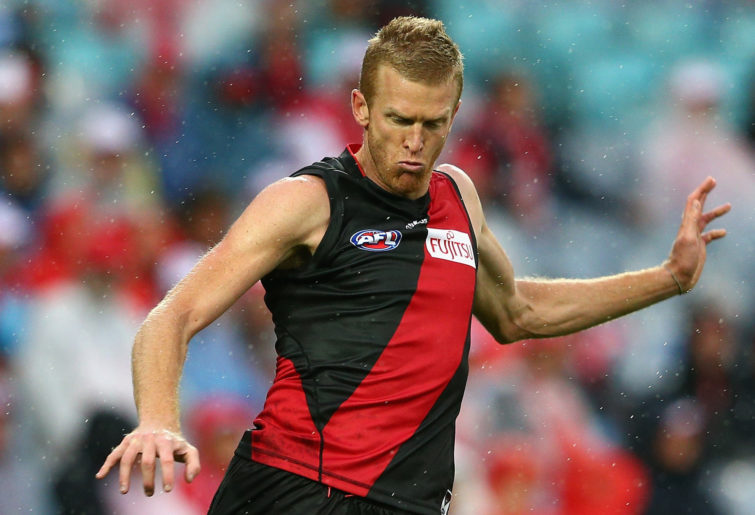 Recruited from the TAC Cup team the Western Jets in 1993, he became one of the baby Bombers who won the premiership in that year. He played in another premiership in 2000, proving his worth as a champion by winning Essendon’s best and fairest and making the All Australian side in the same year. He is the second oldest player to ever play VFL/AFL football, and with his father Ken holds the record for the most games played by a father-son combination.

He played in the back-to-back premiership sides in 1984 and 1985, and like Dustin Fletcher, won best on ground in a grand final. Madden still sits at number six on the AFL top 100 game-players list, but is under threat from Shaun Burgoyne if the players ever return to the park this year.

Number three on the Bombers’ top 100 game-players list is Dick Reynolds, the player who achieved nearly every accolade known to man. When he retired in 1951 he was the VFL’s greatest game-player with 320 games. He captained Essendon for 12 years and during that time coached them to four premierships.

His name appears everywhere in the records of the Essendon Football Club: third greatest game-player, most games as captain, second most games as coach, most best-and-fairest awards (seven), which he shares with great mate Bill Hutchison. Although a rover, he even won the goal-kicking at Essendon in 1943.

It is interesting to note that from being number one on the all-time AFL games-played list in 1951, Reynolds now sits in 47th position on the AFL top 100 list, a clear indication of the greater opportunities open to the modern-day player.