1. Chad Wingard
Because Alastair Clarkson isn’t human but a robotic premiership-winning mastermind – seriously, did you see him running around topless in the snow in Canberra last year? – there are some strange rules at Hawthorn. The first one that most likely popped into your mind is the ‘no long sleeves’ policy. However, Chadley is a smart man and, knowing full well he was heading into the Hawks nest, made his own. With ink. That’s the kind of outside-the-box thinking I respect.

Wingard’s sleeve had such an impact that you can now purchase an official Chad Wingard tattoo sleeve from the club’s merchandise department. I do hope he’s engineered some form of royalty set-up in his contract.

Chad was a two-time All Australian at Port Adelaide and boasted three seasons of 40-plus goals, so coming into the Hawthorn set-up, he had some warranted swagger about him. Unfortunately for the Hawks, in 2019 it took him until Round 20 to really show off his talents. Still just 26 however, Wingard will have plenty more opportunities to reassert himself. 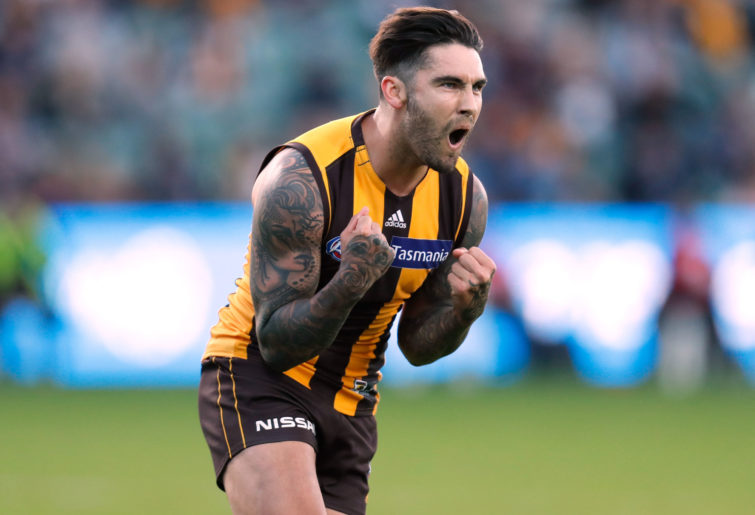 I dare you to google ‘Tom Scully running’. Hell, I’ll do it for you. You’ll find a list from 2017 outlining the most distance covered in a game that season. In 2019 Andrew Gaff apparently held the title with 17.6 kilometres against Adelaide in Round 10. Word on the street says Scully watched that game and giggled a little bit.

3. Tom Mitchell
In 2018 Tom Mitchell had 848 possessions from 24 games. In his entire career Aidan Corr has played for seven years, appeared 83 times for GWS and had 817 possessions. Football is a funny game. Note: this is not a dig at Aidan Corr, it’s just a comparison. Everyone calm down.

Narrowing our focus slightly, in Round 9 of 2017 Mitchell had 50 possessions in a loss to Collingwood and coach Nathan Buckley questioned his impact on the game. This was a terrible, horrible, no good, very bad thing to say. As history shows, in Round 1 of 2018 Mitchell had 54 touches – 20 kicks, 34 handbills and 27 contested possessions – breaking the all-time record for most disposals in a game and helping Hawthorn to a 34-point win. Buckley, to his credit, said that Mitchell was too good.

By the way I want Nathan to double-down in 2020 and cast aspersions Tom’s way. Perhaps then we might see a repeat of his state-level antics from 2014.

4. Mitchell Lewis
To the casual onlooker Hawthorn appears to be quite a straitlaced club. After all, Jeff Kennett is the president. Naturally, it pleased me and social media enthusiasts all over the interwebs no end when they took the stone-cold piss and drafted Mitchell Lewis in 2016 with their second selection.

He’s a walking, talking, living, breathing meme. But that’s not all. He made his debut against Brisbane, of all teams, who had ex-Hawthorn legend Luke Hodge in their ranks. If that’s not the most advanced long-term prank ever seen in the AFL, I don’t know what is.

What makes the whole sage even more remarkable is that not only was this man drafted in a year when both Sam Mitchell and Jordan Lewis departed the club, but in 2019 he snared a regular spot in the Hawks 22 and turned out to be half decent at the whole footballing thing. Mind you, he plays golf off scratch, has played second XI district cricket and seems to be annoyingly skilled at anything he turns his hand to.

5. Fashion design 101
Disclaimer: what I’m about to write – and you obviously read – has absolutely nothing to do with Hawthorn in 2020. Or it might. I’m no psychic. Nor am I what you might term ‘fashionable’. What this boils down to is that I couldn’t write about the Hawks without revelling in two of the more staggering crimes against sight this proud club has committed.

Exhibit A: The ‘Power Ranger’ strip. Oddly defended in the media, the club ditched the guernsey at in 2016.

Exhibit B: I could try to be humorous, but just read this. It says all that needs to be said.

There’s a special mention here which goes to a 2000-01 preseason T-shirt style monstrosity, but this escapes with a pardon on the basis that as a club they decided ‘it’s not me, it’s definitely you’ and abandoned the jumper at half-time of a game to change into something different.