Despite having made just four appearances for Central Coast Mariners’ first team, he has shown his worth at both NPL and international levels with the Australian youth teams.

Ruiz-Diaz has participated in an Australia talent identification camp and made his under-20 Australian debut in the 2018-19 season, among other honours.

This is the first of a series of interviews that offer unique insight into A-League and W-League’s young stars.

Jack George: What have you been up to during self-isolation?
Dylan Ruiz-Diaz: I’ve just been keeping up with a gym and running program and doing my best to keep fit. Also, it has been nice to spend a lot more time with my family at home, which is usually a lot harder to do as we all get caught up in our day-to-day routines.

JG: You say that you have been doing a gym and running program to keep yourself fit. Is that something that Central Coast Mariners have provided?
DRD: Yeah, it has been provided through the Mariners and the young Socceroos strength and conditioning.

JG: Who were your footballing idols growing up?
DRD: I have been supporting Liverpool since I was a kid so it would have to be Stevie G (Steven Gerrard). I loved watching him play and watching him score bombs from way, way out. I also then loved watching Luis Suarez and Philippe Coutinho playing together through the later years when they were tearing it up. My favourite player would have to be Lionel Messi. He has such a natural flair and really gets you on the edge of your seat when he touches the ball. I love his ability to turn a game around and win games on his own.

JG: What are your goals for your career?
DRD: To be successful in football, make a career out of it and play in Europe one day for Liverpool and/or Barcelona and play alongside my childhood heroes.

JG: Just one day after making your A-League debut against Western Sydney Wanderers, you scored a hat trick for the Mariners in the National Premier League second division against Macarthur Rams. Take us through those two days?
DRD: It was a big week, a very enjoyable couple of days. It was a great feeling to debut against my old club and then follow it up with a big game the next night in the NPL. It was great to accomplish that and make everyone proud that’s looked after me through the years. It was a childhood dream come true. 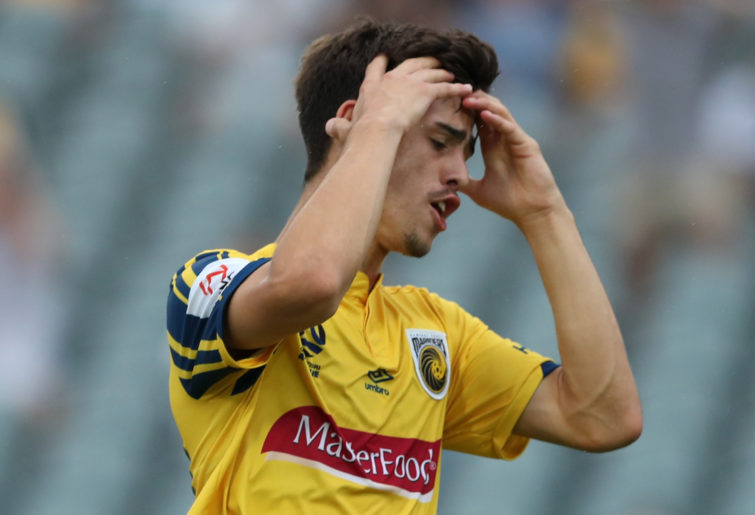 JG: Did you watch Australian football when you were a kid?
DRD: Yeah, I grew up watching Mark Viduka and Harry Kewell. It is a dream of mine to play in the Premier League one day too.

JG: Last season against Melbourne City, you beat Riley McGree with a stunning Cruyff turn. Are there any particular skills that you practise often?
DRD: Yeah, all the time. I love to get out there in the park and work on all different kinds of skills.

JG: On your YouTube channel, you have some videos of you taking some beautiful corners and free kicks. What’s your technique when taking set pieces?
DRD: For free kicks, I just try to keep the ball low and hard and place it into one of the corners. I truly believe you have to see it go in before it does and that is how you turn a shot into a goal. You really have to back yourself and believe in your abilities. With corners, I try to put the ball into the right areas for my team to capitalise and score goals. As an attacking player, I love to score goals but with that, I also love to create goals and that’s why I love taking corners and free kicks, as my team can score off them.

JG: That’s interesting about the free kicks. The technique is important but belief seems crucial. You say you’re an attacking player, but what position do you feel most comfortable in on the pitch?
DRD: I have always been a goal-scoring number ten. I love playing in the middle of the pitch and creating goals.

JG: What do you feel Australia has to do to improve its footballing standards?
DRD: I would love to see more players getting consistent chances at younger ages.

JG: And finally, how would you rate your 2019-20 season?
DRD: Personally, it was good to sign my first professional contract and get some minutes in the A-League. It was also great to represent my country at an international level. I’m looking forward to what’s to come and looking to build from here for the coming years. At club level, I think there’s a lot of room for improvement and that we will look to turn things around going forward.

The A-League is 15 match weeks into a season of 23 and the form is clear. In fact, the finals’ participants may already be decided.