Tim Kelly
In 1996, Weird Al Yankovic turned ‘Gangta’s Paradise’ into ‘Amish Paradise’. Coolio couldn’t see the appeal of parody, noting: “I really, honestly and truly, don’t appreciate him desecrating the song like that”. So far, so Hollywood.

But in 2006 Weird Al and Coolio were spotted laughing together, with the feud apparently dead and buried. So far, still so Hollywood.

Now, at the end of 2018, mature-age sensation Tim Kelly wanted to leave Geelong. That did not happen. Instead, in 2019 he helped the Cats overcome the Eagles in the semi-final, just before West Coast traded the world – or as we in the business like to call it, a heap of high draft picks for the midfielder.

What does all this mean? Simple. Tim Kelly is the Weird Al to Geelong’s Coolio. Or the Coolio to Geelong’s Weird Al. I don’t want to be starting any feuds. Everyone’s happy and laughing. Geelong have a bounty of youngsters. The Eagles have rocketed back into premiership contention in 2020.

Jeremy McGovern
Sam Butler once said that McGovern had the “sloppiest rig in the AFL”. This may or may not have had to do with the fact he once turned up to pre-season training in a rather hefty fashion.

However, with great dad bod comes great responsibility. Just ask Leonardo DiCaprio. But when you’re without a doubt the greatest contested-marking defender in the AFL, you’ve well and truly lived up to said responsibilities.

Now, let’s be realistic here. There’s not many mere mortals that could survive opting into a grand final with torn obliques, cracking your ribs during the game, and celebrating premiership glory by spending the night in hospital with internal bleeding. McGovern did. And apparently mostly enjoyed the whole experience.

I could attempt to deep dive into that psyche, but all you need to know is that McGovern doesn’t follow societal rules. And he is all the better for it.

Jack Darling
Perhaps the greatest myth in the AFL right now is that Jack Darling hasn’t lived up to his potential.

As noted by many media pundits, Darling has become the whipping boy for Eagles fans in recent years. Let’s examine this. I want to present to you some statistics.

In the last two seasons, Jack Darling has kicked 48 and 59 goals. Those totals would have won the club goal-kicking award in that same time frame at Adelaide, Brisbane, Carlton, Collingwood, Essendon, Fremantle, Gold Coast, Port Adelaide, St Kilda and the Western Bulldogs.

He boasts other season totals of 53, 42, 44 and 43 goals. I don’t have the inclination to fact-check how many further club goal-kicking awards he would’ve won at other clubs because that would take a lot of time, but it’s clear that if anyone has apparently committed terrible deeds in his past life that he is being punished for now, it’s Darling. Maybe let’s just enjoy watching him play?

Nic Naitanui
Hands up who had an inkling that Nic Naitanui is entering his 11th season of AFL football in 2020? Anyone? I didn’t know this, am not sure how this has happened, and feel deeply uncomfortable about the whole episode.

What I do know is that Naitanui penned a letter to his younger self recently that included the following analogy comparing life to a complicated speed bump: “It isn’t the stick standard smooth oblong structure protruding from your current Midland bitumen road littered in burnout marks… instead it bares many faces and variables”.

Overall, it’s a touching message. However, he later he refers to the “carefree lackadaisical paint complementing its start and finishing point”. Outrageously clunky metaphors aside – seriously, did he just refer to paint as being lackadaisical?! – the overall message hints at the fact that Naitanui has used his injury setbacks as a genuine driving force, and is once again ready tear the competition a new one.

COVID-19 scandal
Prior to the season being delayed, I had an entirely different paragraph planned. However, a news headline popped up the other day that referred to the West Coast Eagles “taking advantage” of loosening social restrictions in Western Australia by having players once again train together.

In case you missed it, you can now have gatherings of up to ten people in the Wild West. Naturally, the Victorian-based The Age leapt on this, fielding a headline reading: “Eagles, Dockers to get a jump on their rivals”. I haven’t seen the Herald Sun’s take on this matter, but to be honest, I’m scared of what I might find.

What is abundantly clear is that both teams are now premiership favourites as a result. Do with this information what you will.

West Coast have suffered another Victorian nightmare with lowly Collingwood smashing the Eagles by 45 points at the MCG. 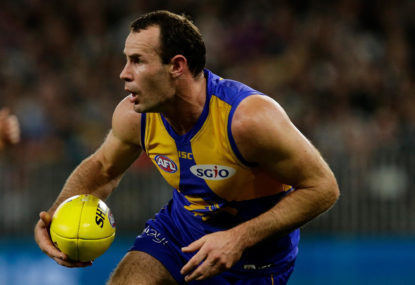 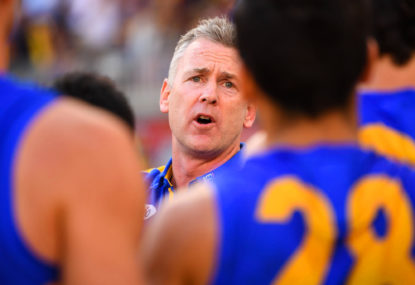 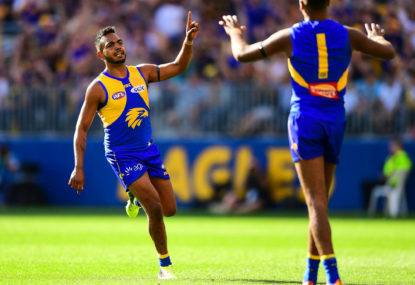