Dennis was inducted into the AFL’s Hall of Fame last night and its quite a fitting tribute for one of Australia’s most iconic broadcasters.

Cometti created a cult following through his creative and quirky one liners which enthralled many sports fans around Australia.

Some of his finest one liners like “he came up behind him like a librarian” and “centimetre perfect” have become house hold phrases, and will stand the test of time.

In addition to his one liners, Dennis also has the ability to use the perfect words when describing the great moments, even under immense pressure.

With thousands listening on his every word, Cometti always finds a way to capture the moment and entertain the audience.

But for Cometti, commentary was never on the radar until he got to his early twenties. Growing up in Perth Dennis was a talented footballer playing for West Perth and also venturing down to Victoria where he spent time at Footscray in 1971.

However, never played a senior VFL match due to injury. During his playing days, Dennis also worked as a disc jockey playing the top 40 music hits for radio station 6KY.

At the conclusion his playing career Cometti broke into the coaching ranks, having some success coaching locally back in Western Australia, which saw him spending time as head coach for West Perth.

Cometti’s football commentary career began by chance however in 1971 when he filled in and called a state game between Western Australia and Victoria for radio station 3KZ alongside Ian Major after the station was short of a commentator.

This short stint was followed by a decorated sports broadcasting career and not long after, Dennis would join the ABC in 1972 as a sports commentator. 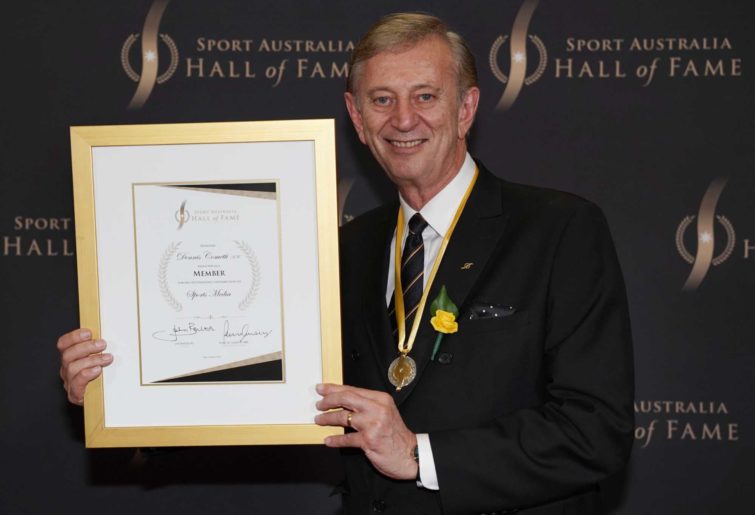 Spending a number of years at the ABC Cometti then joined Channel Seven in 1986 where he worked alongside the likes of Peter Landy, Drew Morphet, Bruce McAvaney, Bob Skilton and a range of other commentators made up of both ex-players and also broadcasters.

Dennis also spent time at channel Nine during 2002 and 2006 before switching back to seven calling alongside Bruce McAvaney.

Dennis however didn’t just ply his trade with football. He called Test cricket at the ABC alongside the legendary Alan McGilvray and was the soundtrack to many spine-tingling moments at the Olympic Games where he perfectly and stunningly called Kieren Perkins and also Susie O’Neill’s gold medal victories.

Cometti’s Olympic calling has been just as memorable and elegantly crafted as his football commentary has been. Focusing on swimming at the Olympics, Dennis called some of Australia’s greatest ever Olympic moments where he earned much praise from fellow broadcasters and the Australian sporting public.

Dennis retired from working in television in 2016 ending his famous partnership with great mate and fellow legendary broadcaster Bruce McAvaney. However, Cometti can still be heard on radio via Triple M where he calls AFL games in Perth alongside his son Mark who has also taken up an interest in the industry.

What makes Dennis so good though? Why do Australians love him?

Well, it’s his golden voice. Dennis’ voice is unique and has great sentimental value for many Aussies.

It’s also his quick thinking and wit that really makes him stand out. You’d have to be a genius to come up with some of the one liners Dennis has come up with.

His timing, professionalism and deep knowledge of football have seen him excel in all areas to become one of Australia’s greatest ever commentators.

Dennis Cometti’s AFL Hall of Fame induction is tremendously deserved and is fantastic recognition for the large body of work Dennis has given to the great game of Aussie rules and Australian sport in general.