A Super Rugby winner with the Queensland Reds, Simmons had assumed the NSW Waratahs’ captaincy this season before announcing his first overseas move to London Irish last month.

The 31-year-old’s departure will deny the Australian game of another World Cup lock after Izack Rodda’s shock Reds exit to France during the competition’s shutdown.

Rodda’s teammate Harry Hockings, another lock on the Wallabies’ radar, followed him out the door after an ugly pay dispute with Rugby Australia.

It’s left the incoming Rennie light on local options in the critical position ahead of likely Tests against New Zealand in October.

Simmons, who has overcome a rib injury to captain the Waratahs (1-3) in a must-win game against the Reds (2-1-1) at the SCG on Saturday, made the call to leave Australia knowing it could spell the end of his Test career.

But, still eligible under the Giteau Law, he will be boosted by Rennie’s assessment of him during a testing season in Sydney.

“Captaining the Waratahs … it’s been a challenge but he’s really trying to bring some physicality to his game,” Rennie told journalists on Friday.

“That’s the sort of feedback we’ve been giving them and it just shows that guys who have been around the game for a long time can still be better, so his attitude there’s been great.”

Rennie’s backrow options are plentiful though, with the Reds’ young trio of Harry Wilson, Liam Wright and Fraser McReight all pushing for higher honours after standout seasons under Brad Thorn.

No.8 Wilson has twice earned Super Rugby AU player of the week honours, his offloading ability and dangerous support play likely to cause headaches in Sydney on Saturday.

“He’s done well; he’s a big man, carries really well and he’s been a big part of their go-forward at the Reds,” Rennie said of the 20-year-old.

“We’ve been in constant conversation with a lot of these guys, Harry’s been one of them and he’s putting a bit of pressure on us from a selection perspective.” 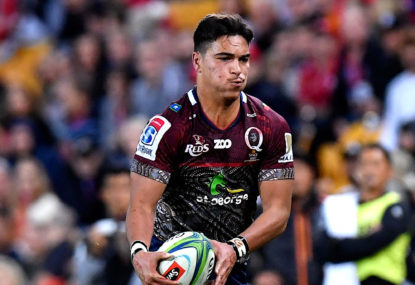