Tom Lynch could be in hot water with MRO

Richmond may have to do without Tom Lynch for their AFL clash with Essendon after an incident that could land him in hot water with the match review officer.

Tom Lynch claims he hit Gold Coast’s Sam Collins with an “open hand to the chest” in an incident that could land the Richmond premiership star in hot water with the AFL’s match review officer.

It occurred during the final quarter of the Tigers’ 21-point victory at the Gabba on Monday night and was later described by former St Kilda champion Nick Riewoldt as a “cheap shot”.

Collins was left momentarily keeled over as Lynch ran off on a lead and took an easy mark before kicking a goal to give Richmond a crucial 13-point advantage late in the match.

“It was just an open hand and pushed off,” Lynch told ABC Grandstand post-match.

“That was it … he (Collins) was a bit angry about that but it was just an open hand to the chest, which as key forwards is what you want to do.”

But Lynch faces a wait to find out if he is free to play in Saturday night’s ‘Dreamtime’ meeting with Essendon in Darwin.

Broadcast vision from behind Lynch and Collins showed a swinging right arm from the Tigers’ spearhead but did not offer a clear view on the contact.

Match review officer Michael Christian will have access to multiple camera angles when he assesses the incident on Tuesday.

A furious Collins remonstrated with Lynch and was caught on camera punching a padded concrete pillar out of frustration in the Suns’ change room after the match.

Earlier this month, Lynch was fined for misconduct after shoving Brisbane defender Alex Witherden’s head into the ground, drawing plenty of criticism.

“I feel like he probably plays his best footy when he’s on the edge. He’s pretty scary actually,” he told Fox Footy.

“We think there’s a level for Lynchy to do that.

“We know that he plays his best footy when he’s aggressive in the contest and sometimes there’s got to be a little bit of this to get him up and going.

“I suppose it’s just understanding what makes you a player and I felt like he had a really big impact in that back half of the game.”

It was one of several ordinary efforts in the first half from the Saints’ highly-paid recruit. 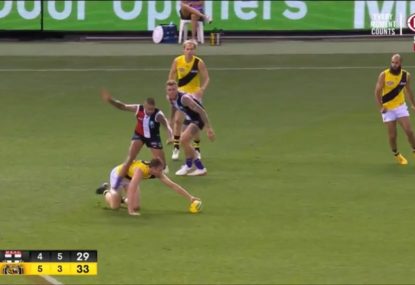 Certainly weird from Paul Hunter- but at least he kicked the goal! 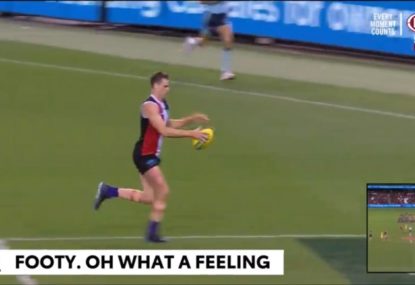 St Kilda will consider sending a hard tag to Dustin Martin in a bid to quell the Richmond superstar’s influence and condemn the reigning AFL premiers to their third straight loss.

Having coached Richmond to three of the last four premierships, Damien Hardwick’s opinion carries more weight than most.